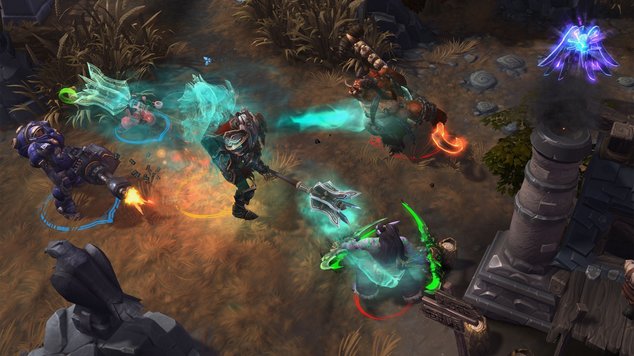 Dear Bigg: How Can I Win With A Suicidal Teammate?
Every week, Max "Bigg" Hoskin answers your Heroes of the Storm questions. This week? Suicidal teammates.

What should I do in a ranked match if my teammate is repeatedly dying just before an objective, and won't listen to us? It feels like winning team fights or objectives with a man down is impossible to deal with. It's not only frustrating, but often I find my team give up quickly, making the whole situation even worse.

Hey Dawnstor! Typically if a teammate dies before the objective, you have to give the objective. There are a few things you can do while waiting for your ally to respawn. You can either grab mercenary camps to pressure the lanes, or pressure the farthest lane from the objective yourselves. This depends a little on the time of the game. If respawn timers are long (45+ seconds) or the enemy team is threatening Core with another kill, then you might have to just wait out the death timer as to not risk dying and losing the game. In the case you mentioned, where your ally is repeatedly dying and ignoring communication, there isn't too much you can do. Winning a 4v5 is very unlikely. Your best shot will be to attempt to pressure the map significantly before an objective to force enemies away, hopefully creating a 4v4. This, as noted above, can be primarily done with mercenary camps. Enemies will either respond to the camps, creating an even team fight, or just ignore them and attempt to 5v4 the objective. If this is the case, you should try to stall the objective as much as possible, without actually fighting. Disengage every enemy initiation, but continue to buy time. This way, the mercenary camps you've released will be dealing damage while you keep the enemy distracted. If all else fails, you should try to remain calm and avoid becoming tilted, since this will likely affect your future matches: don't become the ally that dies repeatedly because you're stressed from a previous game. Good luck.

Max "Bigg" Hoskin is ranked #23 Grandmaster in Heroes of the Storm. He spends all his free time playing the game, and produces our Mind of a Master series. Have a Heroes of the Storm question you'd like Bigg to answer? Drop us a line on Twitter, Facebook or the comments section of our Tier List and Bigg will make every effort to answer it!