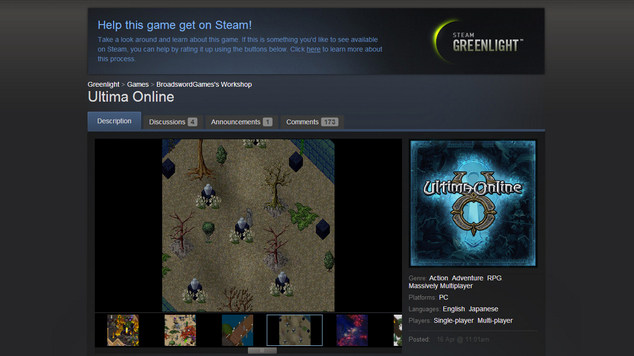 Some games just don't know when to quit and it seems Broadsword games, the new rulers of Dark Age of Camelot and Ultima Online believer there's life in the old dogs yet. Both titles have appeared on Steam's Greenlight service, with the intention (one assumes) to gain enough traction to see both products brought onto Steam and a new audience. As a fan of both games and having made my entry into this genre through Ultima Online, I have very fond memories.

My issue here however is that despite the games being good way back when, they play horrendously now. The genre has moved on in such a way that there's just no room for either one. When you've got WildStar on the horizon or Elder Scrolls Online, heck, even World of Warcraft, why would you drop $15 a month to play DAoC or Ultima Online? I appreciate there's a lot of nostalgia here and there's very little that has come close to rivalling much of what DAoC or Ultima Online offered but going back to either game is like playing with your hands tied behind your back: its just not fun.

Although both games still have a relatively busy population, my biggest concern would be the fact that how does one go about leveling up in a game where all its inhabitants are at maximum level and when the games original structure does not support solo play (these two required a large amount of grouping and grinding). If anyone does know, please fill me in.

Here's the Dark Age of Camelot and Ultima Online blurb:

King Arthur is dead and with him the force that held three Realms in an uneasy peace. Now the defenders of Albion, Midgard, and Hibernia are locked in a mortal struggle to defend their sacred relics and preserve their homelands. Band together with fellow champions of your Realm from over 40 classes and more than 20 races. Witness wondrous magic clashing with deadly siege weaponry as raiding parties cross frontier battlefields strewn with the bodies of fallen warriors. As heroes, they return with captured treasures and the insignia of victory. Join our community of passionate players and Live the Legend of Camelot.

If you disagree and want to show your support, head to the Greenlight pages and pledge your allegiance (MIDGARD FOREVER!!!!111)