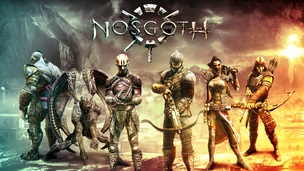 style="font-style: italic;">And yes, there's a ton of
achievements to be had here.  Only unlike every other game,
getting them earns you real currency to spend in the shop!


Do you crave intense skill-based PvP?

Do you appreciate timing and reaction based combat, with solid pings to
both US and European servers to make those tactful moves possible?

Do you enjoy team based combat, both deathmatch and objective based?

If you said yes to at least two of the three, youll be in love with
Bloodline Champions.  Bloodline Champions is an arena combat
game.  You control a single character and fight alongside
friends to rout the enemy team one way or another.  Movement
is controlled with WASD, and every single attack has very specific
aiming to it based on where your mouse is.  If you want to
melee someone, you have to be clicking in their direction, and they can
dodge it if they rotate around you.  There is no targeting in
Bloodline Champions, and thus the skill ceiling is very high.

When talking about Bloodline Champions, its important to eliminate one
major comparison that is often thought of by the misinformed.
This game is not meant to compete with Defense of the Ancients or
League of Legends or any of those related games in their
genre.  Bloodline Champions is about team combat at its
finest, with no items, no levels, no grinding.  You spawn with
the exact same power from one second in than youll have an hour in.

Youll experience CTF combat, capture point combat, team fights in
glorious death match combat with many games coming down to a
nail-biting 1v1, and there are even bots to fight against by yourself
if youre looking to try out skill combos or just get used to a new
character (called Bloodlines in-game)  Theres something for
every PvP combat lover out there!

This game is not rated by the ESRB. It has a very passionate community that loves to win, so some words will be exchanged from time to time and the occasional blood fountain for an overkill. Tiny things aside, this game is good to go for everyone to enjoy.

style="font-style: italic;">One thing to notice is the
actual size difference.  Size does affect your vulnerability
to projectiles and your hitbox, so size DOES matter in Bloodline
Champions.


Teams are split anywhere from 2v2 to 5v5, and each character picks a
character that falls into one of four archetypes:

Tanks
: There is only one taunt in this game, and its pretty
limited.  Tanks in this have a higher health pool and excel at
taking damage, controlling enemies with various negative effects, and
doing quite a bit themselves.  Theyre extremely vulnerable to
being kited unless your aim is precise.

Melee
DPS : Melees in this game are faster on foot than the
other classes, and deal more damage with basic attacks than any other
class.  They have multiple ways to move around the map, and
each have ways to leech health or otherwise survive when focused
on.  You take bonus damage when attacked from behind, so
running from them is not an option typically!


Ranged
DPS : Your typical ranged class is all about demolishing
people with rapid fire.  Just having good aim and constantly
bombing someone with your basic attack is enough to send people
packing.  They have strong area of effect attacks, and at
least one lethal charged up shot.  Theyre slower on foot than
the other classes, but have at least 2 panic buttons to go to when
being chopped up.

Healers
: Healers always have one spell that can be spammed to
keep people alive from afar, but the heal has to be aimed too! It
cannot be intercepted by the enemy, but you can miss your allies or get
a lesser heal due to them being too far outside the splash.
Healers have multiple shields and debuffs to keep themselves in the
game when focused, and are among the hardest targets to come up against
1v1 simply because they can keep themselves alive much better than you
can!

Balanced teams are almost always preferred, but good players can
survive without healers long enough to kill their opponents.
Once the brawl begins, the action pretty much never ceases (well,
except when you die!)  Cooldowns are very short.  As
you land attacks, you build up an energy bar that can be used for EX
versions of attacks with amplified/different effects, or save for your
ultimate, which often turns the tide or outright wins the game.

Timing and precision are important.  You gain absolutely
nothing when you miss an attack, and you probably just stood there for
a split second and ate one in return.  If you use a counter
attack ability too early, an enemy might just watch you twirl your
weapon in place and laugh, then punch your face in a second after it
wears off.  If you time your Stalagmite right with Glutton,
youll pull their healer from the back lines right into your
team.  If you miss, you have a 10 second cooldown or you just
pulled their tank into your team insteadnot a good thing!

The sky is the limit, and no two games will ever play out the same way!

In a game as intense as Bloodline Champions, the graphics can get in the way of the actual combat. The team at Stunlock Studios did a wonderful job of making the game flashy for a top-down perspective, but simple enough to see exactly where attacks are coming from and what attack they are before they hit, so you can dodge them or activate counterattacks. There is no what the hell just hit me moment, unlike a lot of arena games or games like Heroes of Newerth for new players. While the game does look good in motion, screenshots look pretty plain and this isnt a game youre going to show off to your friends for its graphical qualities.


One of the things they nailed, oddly enough, is the combat text mid-combat. Its the perfect size and duration on screen. It lets you know youre affected by buffs or debuffs, the stack amount, and disappears shortly afterwards. So many games make it difficult to see the strength or amount of debuffs in play, but this game does it quite well. Its pretty important since every character has a way to make big red words appear over anothers head, and some many at once!

All of the attacks have good audio cues to indicate impact, flight, and channeling. Since the battlefield is wide, some attacks will be happening off screen and you arent totally left out due to the good sound effects. Everyone has laughs and gloating for getting killing blows too, even the healers! The music that accompanies the combat could use a little more variety, but the themes themselves arent bad by any means. If anything theyre more energetic than youd expect, and are probably the best in the arena combat genre, though thats not saying much.

The biggest problem with Bloodline Champions, is oddly enough, the pricing scheme and availability. Its a good game, theres no doubt about it, but if you are new to the game you get to work with 4 of the 20 available champions at the moment. Thats 20 percent of the game, basically. You get from 20 to 90 blood coins after a match, and how much is it to unlock a new character? Seventeen thousand. 17,000. Discarding achievements, that's a lot of matches for one character. Holy shit. After doing some calculations, I could grind out the highest costing champions in League of Legends faster than a new champion in Bloodline Champions more than likely.


But of course, if youre fine with waiting for the free rotation for your variety, you will spend nothing and get your moneys worth and then somefree fun! You can purchase individual heroes and such with Funcom Points purchased with cash, and there are two editions available for purchase that come with multiple heroes, or in the Titan editions case, all of them. The downside is the up front cost of $29.99 and $89.99 are fairly steep for a game of this nature. This isnt a deep game. Youre not going to grind here, youre going to fire it up, play a few games for fun, and likely go back to Alterac Valleyor play a game while queued for it.

You have to constantly evaluate
the situation.  You don't just pile on the enemy healer in
this, they're very good at keeping themselves alive!

With the game newly released and the
first patch coming out
in a matter of days, the support of Funcom and Stunlock Studios seems
to be in
full force.  In
order to make a game like
this work, they need to constantly be updating the balance and adding
the occasional
new character to add additional depth to the selection and team makeup.  But with 20 heroes
available at launch and
the infinite possibilities of how a match can actually play out, this
will stay
installed for a long time for those who enjoy it.

Punching healers in the face is fun, pulling people across the map is fun, cutting people up from behind is fun Stunlock Studios basically took everything good about arena and hero combat and put it all together into one game. They removed the grind, the items, the buildup and everyone is on the same level playing field. Want to play another character? Select it. You dont start at level 1 and have to grind to 85 in this. Perhaps most of all, this game is an absolute blast to play as a coordinated team in. Putting together a beatdown on a player before they can even react will never get old, and for that reason Bloodline Champions wont for a long time!

To read the latest guides, news, and features you can visit our Bloodline Champions Game Page.