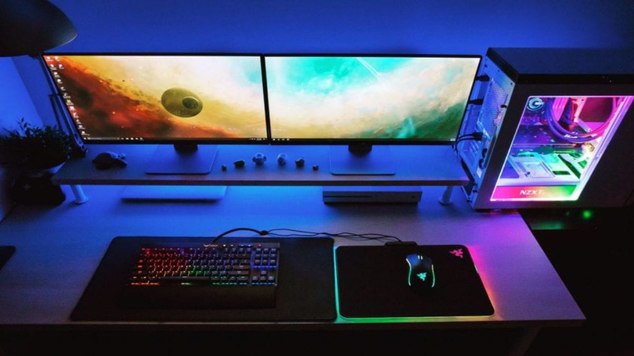 The horrible caveat to any system setup is that this budget gaming PC build would sure be a lot easier if the main components were actually available. Like most of our gaming PC build guides, this has become more of a wishlist than something you could reasonably go out and build yourself right now. Thankfully a lot of components, from CPUs to SSDs, are in decent supply, but because of the GPU shortage your graphics card is going to be the real sticking point. But there is some hope in the shape of our $400 gaming PC that doesn't need a graphics card to game.

This build's theoretical budget is $750, not including peripherals like a mouse, keyboard, or monitor. It can run the majority of new games on high settings with 60fps at 1080p. Most of the budget went on the CPU and GPU for this build because these make the most difference to overall performance. That doesn't mean we've skimped on other components, though. While we haven't necessarily used the best RAM for gaming, it still boasts a high base clock speed.

The $1,000 budget for our main gaming PC build guide is still a whole lot of money to spend on, well, anything really. So if you're after a more affordable setup, you've come to the right place. But whether you're figuring how to build your first gaming PC or just looking to upgrade your old gaming set-up, embarking on a budget gaming PC build can feel pretty daunting. Don't worry; we've got you.

You should note that that is currently a massive GPU shortage, so tracking one down might be an issue for a few months until stock refreshes. It's a bummer for sure, but it should subside sooner or later.

If all this talk of building your own PC seems a bit daunting, there are plenty of preassembled cheap gaming PC deals available, but there's nothing like the thrill of putting together your own gaming rig. If you need a refresher course on PC building, feel free to consult the video below featuring PC Gamer alum, Jarred, Bo, and Bo's beard.

Next-gen features on a tight budget

Can be hard to find at the MSRP

Getting on a bit now

The budget end of the CPU spectrum is a vibrant place, with the likes of the Intel Core i5 10400F battling it out with the Ryzen 3 3100 and 3300X. This is before you consider the last couple of generations of silicon too, which is always a good place to turn if you're on a tight budget. Make no mistake, though; the Ryzen 3 3300X is the chip you want. In fact, it's so good the only problem you may have is actually getting your hands on one.

The Ryzen 3 3300X has several things going for it, including support for PCIe 4.0 devices and its high operating clocks. The former is important if you want to splash out on a next-gen SSD to make sure you're not sitting around waiting for your games to load, while the latter ensures your graphics card isn't being held back when you do get in-game. The fact it's a 4-core, 8-thread chip means that it packs a decent punch at other tasks as well.

...especially at the MSRP

While Nvidia has been quick to sing the praises of ray-tracing with its RTX cards, its line of GTX Turing GPUs offers decent performance on a budget. And the Nvidia GTX 1660 Super offers similar performance at 1080p to the 1660 Ti but at a reduced price point. While both cards share the same 6GB of VRAM, the Super has fewer CUDA cores when stacked against the 1660 Ti and slightly lower clock speed, but its higher-clocked memory delivers higher bandwidth.

This card comes equipped with Nvidia's Turing architecture, but users of any of the later 10-series of GPUs won't see much in the way of improvement and would be better off looking to Nvidia's 30-series of GPUs to upgrade their performance. The 1660 Super lacks any hardware raytracing features and doesn't have the necessary power to take advantage of them.

A good budget B550 board that offers great value for money

Has the really critical features you need

High-end motherboards enable you to reach crazy overclocks, attach loads of different expansion cards, and connect to your networks and peripherals in a myriad of different ways. When you're on a super tight budget, though, a lot of that stuff is unnecessary. You want a solid core. You want to be able to plug in your CPU, graphics card, and SSD. That's it. And that's exactly what this tiny budget board from Asrock lets you do.

At its core, you'll find AMD's B550 chipset. This is a slightly cut down version of its premium X570 offering, boasting fewer PCIe 4.0 lanes, but that doesn't really affect this Micro ATX offering much anyway, so not much is lost. The stock performance is indistinguishable from much more expensive motherboards, and given that overclocking is fairly unexciting on Zen 2 when it comes to actual games anyway, you're really not missing out. This is a laser-focused budget board, and this is the perfect place to use it.

Plenty of memory for most games

Sufficient for most tasks

Not the fastest RAM around

This slim, no-nonsense memory kit from Corsair lets us deliver a huge amount of memory and increases our clock speeds, too, without going off the deep end with our budget. While indeed not the fastest RAM available by any stretch, lacking the flair of many RGB RAM kits, it's practical and sensible, which is what we need for this build.

Of course, there are tons of options for memory kits, and this is just a suggestion. Memory prices have really dropped recently, but there's always the potential for higher quality RAM savings. You could technically get away with 8GB of RAM, but we'd recommend sticking to 16GB and staying in the realm of 3,200MHz instead.

Just make sure to pay attention to the frequency and timing, as well as the price. If you need some additional pointers when looking for memory, our guide to the best RAM for gaming can help point you in the right direction.

High capacity and low cost make the 660p a winner

Showing its age a bit

Much faster drives are now available

You can't have a PC without storage, and you're going to need space for your OS as well as whatever games you want to keep on hand. Thankfully, with memory and SSD prices dropping in pretty rapid order, we've finally found a way to slot an M.2 SSD into our budget build. Not only are M.2 NVMe SSDs easier to install, but they offer better performance than their SATA counterparts. And at just over $100 for 1TB, this Intel QLC drive is a great value.

The transfer speeds of the Intel 660p, however, do tend to slow down considerably as it approaches capacity, so you'll be grateful for all that space. This drive isn't exactly what anyone would call the top-of-the-line performance, but this is still one of the best SSDs for gaming if you're on a budget.

Just try to keep at least 100GB free, and it should perform fine. Or at least, no worse than any budget SATA SSD.

More than enough power for a budget PC

Can power most builds

Non-modular, so wires can get messy

The various upgrades to our budget rig draw more power than previous builds, so we've had to go with a slightly larger PSU. It's tough to go wrong with a power supply as long as you're sticking with a major vendor.

This non-modular unit from EVGA has more than enough juice for our needs. The fixed cable design does limit you somewhat in terms of expansion, but unless you're planning to put a second GPU in your rig, there's still modest headroom for overclocking if you choose to upgrade your CPU in the future. However, you'll need to look at the best power supply units for PC gaming if you want to take your upgrades even further.

Does what you need

Lacks the latest bells and whistles

Somewhat unexciting to look at

Cases can be extremely subjective, and while it's easy to spend more than this, you'll be hard-pressed to find a better one for less than $60. We've settled on this relatively spacious and inexpensive case from Phanteks. It lacks many of the bells and whistles that a more expensive case can provide, but it gets the job done without cutting too many corners.

There is a certain temptation to max out your budget on a pretty looking case, but it's important to remember this piece of your build will have no impact on performance than the other stuff you should be spending money on. Buy something that does what you need it to do and is easy to work with.

Or go ahead and make a fashion statement; just don't expect higher framerates.