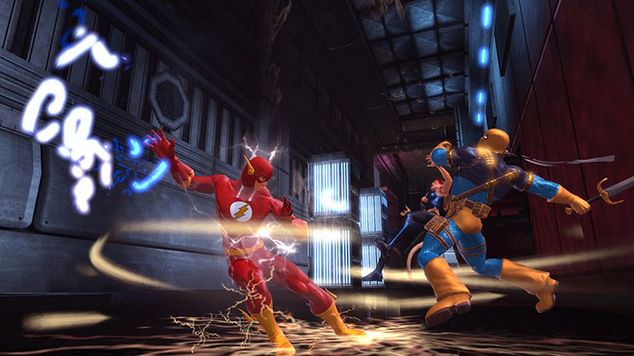 DCUO Preview: Episode 17 - Flash Museum
We take an early look at episode 17's Flash Museum and some other traits of this new monthly update cycle DCUO

DC Universe Onlien is coming out with not only the Flash, but the Flash Museum which is a duo dungeon divable by two, along with a new operation where you get to defeat Trigon. We had the early chance to take a quick look at the Flash museum in this episode before it comes out to bring back some interesting facts and some thoughts on where this new monthly episodic content is going. We only got a quick peak at the dungeon and a little bit of Flash as a legends character, but I can easily say that this looks to be a lot of fun and that the DCUO team seems very, very passionate about the content updates as they are, which is super neat in my book.

This is the third monthly episode the team over at DCUO has unleashed. They average out that three monthly episodes relates to one previous DLC/episode in size (probably they’re collectively bigger) and while, let’s not use the word tier, you could feasibly call them such as they complete a gear set when all the content is considered to come together. Players will be able to finish off all the various styles they’ve been working on in the last two monthly updates, along with the elite gear set.

A cursory look shows that the monthly releases, while collectively being $2 more in a bundle of 3, looks to contain more content, especially raids and dungeons, but I’m not a specific expert on the subject. Anyway, this is a monthly update and the last in a set of three that would complete, if we could use the word, a tier.

A tier is a tier, I think, but again, that’s not the official terminology (yet, I’d imagine).

The biggest thing to note about the museum is the massive amount of new assets that’ll be used in base building from the museum, including some really cool animated signs and lots of nods to various companies and the such in the DC Universe. I’m not certain what is and isn’t making the cut, but it’ll be on servers soon. The fidelity of the dungeon is actually rather impressive, even considering DCUO’s age.

The dungeon itself is a dungeon (I’m using the word dungeon for Duo, because it’s just comfortable for me, but it’s a Duo). You start in the subway and climb your way up into the actual museum proper, fighting various ninjas and bosses, collecting loot as you go. It’s rather nice.

Some of the neat things about the dungeon is that it has that creepy voice over that plays when you enter a room from the speakers that talk about it and there is a replica of the cosmic treadmill as well, along with a gift shop.

Some of the things we haven’t looked at, but are coming, is the broker & celestial improvements, Flash as a Legends character, and the standard list of game bug fixes and updates.

This update is live for members on October 7th. Free-to-play players will get to experience all of the game update fixes and purchase access to Flash as a legends character beginning then. The cost for the DLC should be $4, which I personally think between the raid, Duo, and Flash it’s not a bad deal. You can also get the all-access pass which includes everything, plus everything in some other games, for a monthly subscription fee.

You can read more about the update and purchasing the episode for the PC (consoles can purchase content within their console store) on the official website.