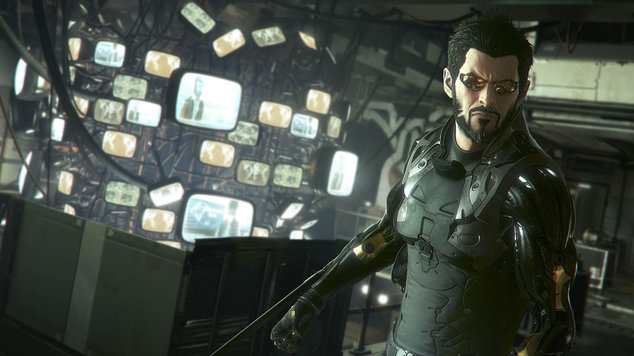 Deus Ex: Mankind Divided - First Impressions
We demo'd Deus Ex: Manking Divided at E3 2015 and have some interesting thoughts to share about the game.

Deus Ex: Mankind Divided place 2 years after the events of Human Revolution, which culminated in a blind massacre at the hands of augmented humans killing against their will. This was a world-changing event, and now there's a great deal of hatred toward the augmented, who are sequestered to aug-ghettos. "If you think of this as Deus Ex meets the themes of District 9", according to Mary DeMarle, Executive Narrative Director for the Deus Ex Franchise, "you'll have a pretty good idea of what we're going for."

Adam Jensen returns as part of a newly formed Interpol task force attempting to stem the resulting terrorism and black market activities, but Jensen has a double agenda: he believes the task force was secretly formed by the Illuminati, his true eternal nemesis. 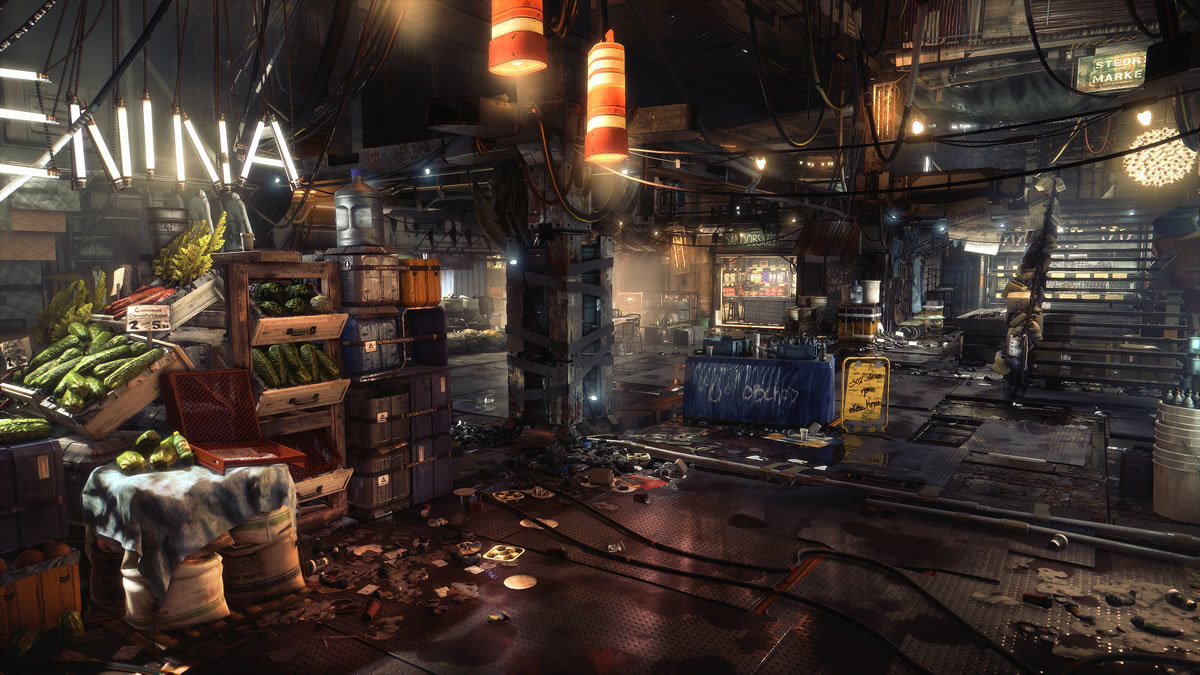 The E3 2015 demo had two parts: an extended story piece reminiscent of Half Life 2's intro, which saw Jensen making a cover contact in a tense Eastern European train station, and a gameplay demo that featured what Eidos Montreal deems the four pillars of Deus Ex gameplay: combat, stealth, hacking, and social gameplay. All four expose options and create deep consequences which change and define how the narrative plays out.

While a little drawn out, the sequence established the thick tension and atmosphere of hopelessness nicely, culminating in a terrorist blast that sets the story in motion. The Augmented Rights Coalition is suspected in the attack, and Jensen is dispatched to an aug-ghetto to retrieve their leader, Talus Rutger.

"When you play Deus Ex, you should always remember that it's a multi-path, multi-solution game, so you want to pay close attention to the environments." As in any Deus Ex games, choosing the path less traveled might lead to more story bits, opportunities to question NPCs, new equipment, and shortcuts past areas that you would otherwise have to shoot your way through. 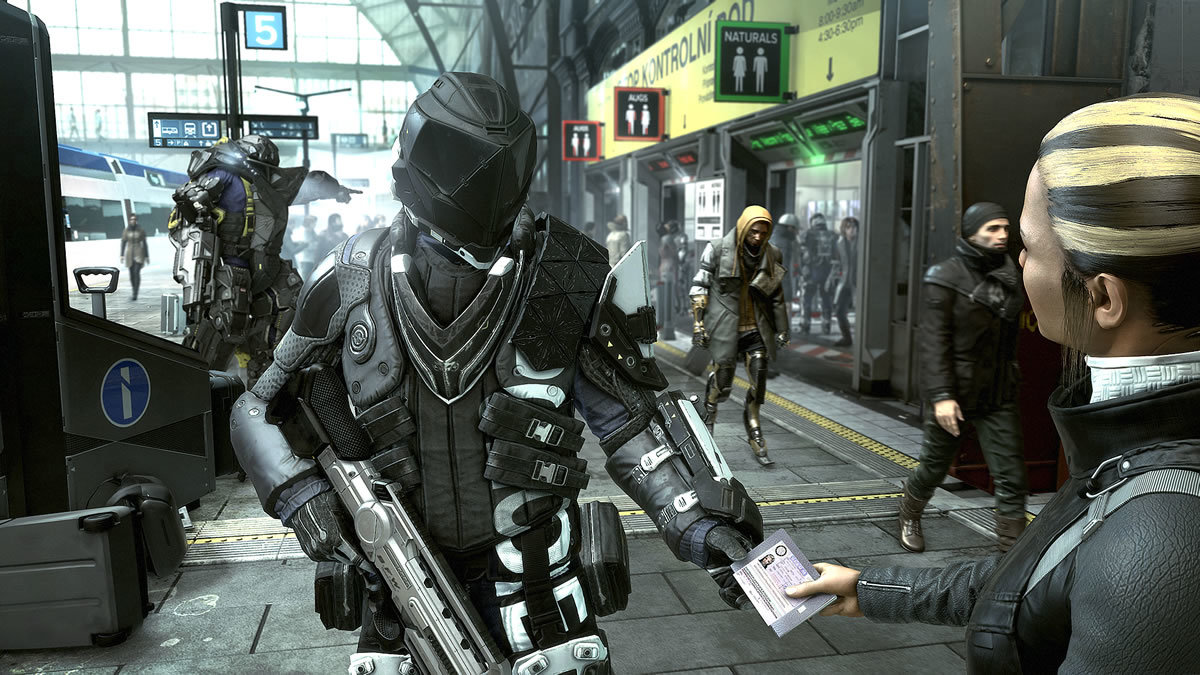 The first part of the map was completed super-stealthily, and I was glad to see that Deus Ex remains one of the few stealth games that doesn't lock players in "watch the guard patrol route" prison. New takedowns allow you to stay in cover and not break stealth as well. Also, Ms. DeMarle noted that you can complete the game without killing anyone, and a number of new abilities and takedowns are provided to help.

The influence of Dishonored was apparent in a new augment, Icarus Dash, which allows the player to quickly move from cover to cover, even across gaps. A variant, Icarus Flight, allows Jensen to take out enemies below him. And when fully engaged in combat, a Titan Shield augment encases Jensen in a dark crystalline shield, making him temporarily invulnerable. Max Payne's bullet time gets a nod as well with the Focus Mode augment, which slows things down and allows Jensen to, say, unload a full shotgun magazine accurately while running down a hallway.

Improvements to Deus Ex's already slick interface were apparent in quick switching ammo between EMP, armor piercing, and standard ammo. Jensen can switch to augment upgrades quickly and easily too. For example, the newly throwable nanoblade can either take out an individual target, or could be thrown into a crowd and detonated remotely. Also, a newly revamped 3D hacking interface now has booby traps, fog of war, and a whole new array of hacking tools. 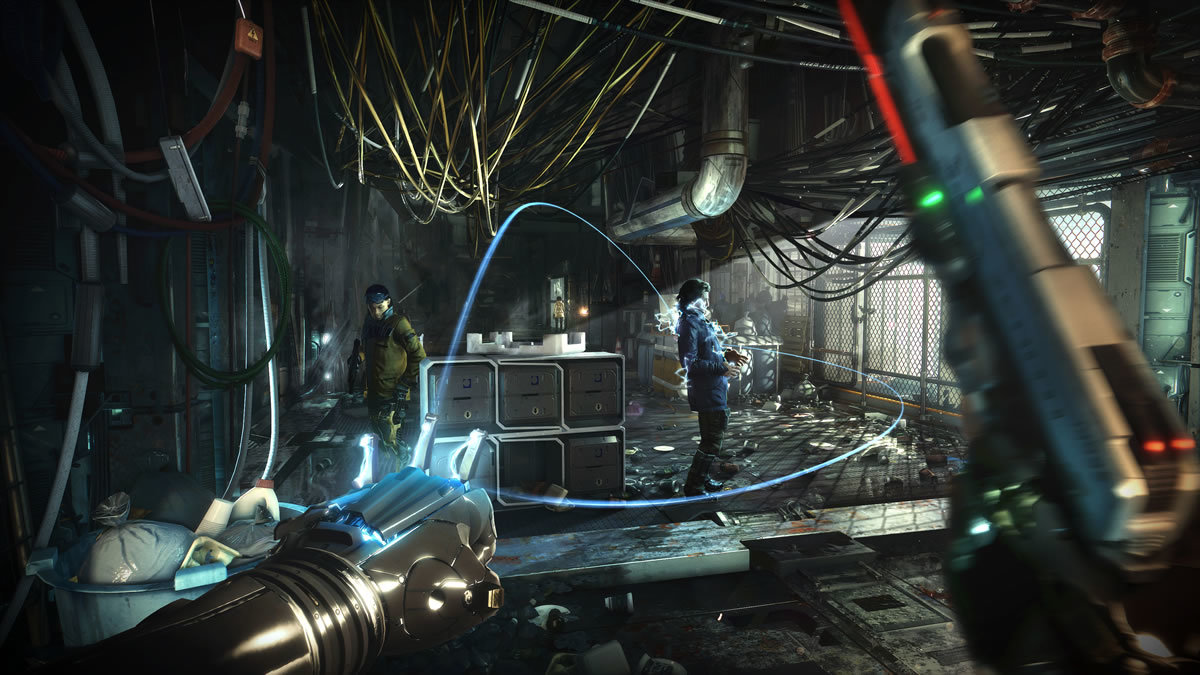 The final encounter with Talus Rutger is what Ms. DeMarle termed a "social boss fight." We spent a lot of time on body and facial animation so that you can really read the character in these debates, and we made the dialogue reactive to what you've done previously in the game." As an example, Talus Rutger began the conversation by asking that Jensen not kill any more of his people. It was a sour note, reinforced later in the conversation, whereas things might have been easier (yet a little less fun)if Jensen had sheathed his merry nanoblade.

Two decision points presented themselves in the course of the conversation and "turn tables" was chosen twice - the wrong combo as it turned out. Rutger sounded the alarm before killing himself. Ms. DeMarle noted that had Jensen won the debate, he would have had time to explore and perhaps even received a key that would help him later in the game.

The demo concluded with Jensen narrowly exfiltrated from the aug-ghetto, and a shiny new release date of 2016 on "all platforms"" (we're assuming this excludes Apple Watch). Despite the me-too augments from other games, Deus Ex: Mankind Divided has all of the grit, pulsing techno music, and sheer dystopian technocratic splendor we've come to know and love from the series. The social boss fights are a welcome addition, as are Eidos doubling down on making consequences even farther reaching and impactful in big and small ways throughout the game. Now the long wait until next year.

To read the latest guides, news, and features you can visit our Deus Ex: Mankind Divided Game Page.