Developer Interview with Revival's Adam Maxwell - Part 2
More from Veluux's interview with Snipehunter, this time talking about some of the intriguing mechanics both in
Editorial
Revival 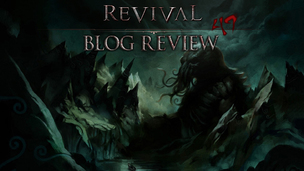 Developer Interview with Revival's Adam Maxwell - Part 3
In this final part of Alex's interview with Adam, the questions dive deeper into what makes this world tick and

[Welcome to the third and final part of a much larger interview with Revival's Lead Systems Designer: Adam Maxwell, a.k.a. Snipehunter from the game's official forums. If you didn't get to read part one of this interview you should definitely do so before continuing on, along with part two as well -since this piece is just the conclusion to those first bits.]

TTH Veluux: I'm excited to see the unique combat Revival offers, but even more exciting to me will be the world it takes place in. Can you talk about some of the environment systems you have planned for Revival - and maybe talk about how those will affect players and even NPCs while playing?

Adam Maxwell:  It may be the Rule of World in overkill mode, but when we set about modeling the world of Theleston mechanically, there were a few things we really wanted to incorporate. Most notable to me I think was the idea of environmental effects. It’s sort of been a pet peeve of Ombwah’s (Chris Holtorf) that the worlds of most MMOs don’t even bother to make things like the cold or the heat matter, even though they take their players to such fantastical locations.

How many times have you stood in a fire, only to have it not burn you, or stood inches from a lake of lava and been totally fine in an MMO? I share Ombwah’s irritation, honestly. In some games it’s outright ridiculous. So, call it a bit of self-indulgence if you want, but to us the world doesn’t feel right when that sort of thing is missing and so we’ve gone sort of whole-hog with it.

In Revival, the ambient temperature of each region's weather plays a part in how your character fairs there. You could literally kill your character if you’re not conscious of the environment. The way to mitigate this in the cold is to dress warmly. In warmer locations you’ll want to make sure to either dress in as little as possible or to at least be smart about what you wear so that you don’t find yourself stifling in the heat. The weather matters in a similar way, as well; when it’s cold and rainy, disease is pretty likely and warming back up will be difficult because you’re wet. Unless you’ve got something like foul weather gear, of course.

TTH Veluux: That sounds pretty powerful. Will you have static, defined weather in areas, or will it change dynamically?

Weather is modeled in two different ways in Revival, one system we have models wind directions and speeds and there is another that tracks the formation and movement of storms and similar phenomena. The two systems work together to model the weather, the results of which feed back into the temperature system to modify how hot or cold an environment is. That temperature also feeds back into the weather systems so that the three drive each other through their constant interaction; we do that sort of thing a lot in our systems design.

All of this affects the way your character moves, how effectively they can fight, and it may apply serious status effects such as heat stroke or hypothermia. Your character's susceptibility to disease may be affected and even determine whether they survive whatever journey they’re on. You can’t expect to trek out into a blizzard alone and survive, in Revival. At least not without a lot of skill and the right equipment.

We actually do a similar thing with magical energy and we also use the same tech again to model ocean currents for sailing. I certainly can’t speak to other MMOs or anything, but for me, Revival is definitely the project in my career that has the most detail put into atmospheric modeling. It’s sort of glorious.

TTH Veluux: Revival is one of the first concepts I've seen that looks like it will hold water as a truly living and dynamic world. I've seen other games talk about a "living world" but most finished products have been superficial at best in that regard. What do you think is the most important aspect of making an MMORPG really come to life?

Adam Maxwell: It’s definitely the Rule of World, for us. If you really adhere to the philosophy the Rule implies; if you really do put the feeling of the world as a place all its own first, then what should fall into lockstep behind that is a series of decisions that results in the project’s efforts being spent on supporting that actual world the players are inhabiting. After saying it, I realize that probably only makes sense in my head, so let me elaborate:

I think what matters most when it comes to building a living world is actually treating it like it’s a living world. Once you do, where to “go deep” and where to “fake it” becomes obvious. I think without that though, you end up making the opposite choices. You instead invest heavily in the aspects of the world that don’t really make it feel real or tangible, but do make it “seem cooler when you talk about it” because at first glance - that’s what seems important.

Lord of the Rings is about wizards and orcs and a big bad evil right? It’s not about a fully realized dwarven culture with generations of history that informs the architecture and layout of Moria, or the lifeways of the elves and their history that dictates the decisions that they make, right? Only that’s not right, is it? Without either of those, Moria is a flat “monster of the moment” dungeon like a daily 5-man raid and the elves are just “the hot blondes with the pointy ears.”

TTH Veluux: Hahaha! Sorry, but that was great. I think you just made Orlando Bloom blush somewhere out there.

Adam Maxwell: For us that’s where the Rule of World comes in. Once you focus on the world as being an actual world, you can understand why it is the way it is and that informs how it needs to behave, which in turns makes it much easier to realize which things you need to simulate and which things you can fake instead. When you’ve done it right, you’ll be able to step back and let it run, watching the world you imagined move on its own in just the way you’d expect it to.

TTH Veluux: What challenges is the team facing in trying to create this living world, and also - what elements of your design make you the most confident that your version of a living world will be successful?

Adam Maxwell: We have a lot of work cut out for us. We have all of these systems planned and none of them are meant to work alone, so we’re committing to this in an all-or-nothing fashion that I think would make a sane producer flee in terror. You can’t stop till it's done or you end up with a half-built clock, or a garage-project muscle car that you still can’t drive after years of tinkering with. However, that’s what it takes to do this right.

Without this sort of holistic approach, the task of making a world live and breathe is basically impossible, I think. It’s certainly more daunting a task than most studios could reasonably account for. We get by because we’re not really making super-convoluted systems. Otherwise we’d be doomed from day one.

TTH Veluux: What do you mean when you say you're not making super-convoluted systems?

We’re not modeling the weather, for example, but we are modeling simpler components that together will present themselves as weather. This way we can get something like weather done in smaller, more easily testable parts and also more quickly since we’re doing less work and also doing that work in a way that lets us build the required systems in parallel. We’re making lots of tiny systems that interact with each other.

That’s the key to pulling off the level of dynamic interaction we’re aiming for and what makes it possible for the world to evolve over time. Ultimately the world of Theleston will be this huge cybernetic meta-system where each of its components feeds back into the rest to produce a result that is much greater than the sum of its parts.

TTH Veluux: It sounds very ambitious and very different than anything I've ever heard of before. Normally I'd be incredibly skeptical, but the process you're describing sound achievable. I suppose I could probably ask you an entire interview's worth of questions about this different approach, process, and deployment you guys are using for Revival - so I won't even begin to dive into that right now.

Thanks for sharing some insight with myself and the readers at TenTonHammer. We really appreciate you sitting down and being so open and candid in your responses!

Adam Maxwell: Thanks for having me.

[That's it for this interview. If you're as intrigued by this concept as I am, you should definitely check out the game's official website - which has tons of great info and the forums are filled with active discussions where the developers are frequently participating. Additionally, myself and a couple of guildies also host a weekly twitch livecast that talks specifically about everything Revival as we watch this development process unfold. You can find replays of that livecast at our official YouTube channel where we keep an archive of all of our past episodes. Thanks for reading and be sure to comment below with your own thoughts and opinions!]