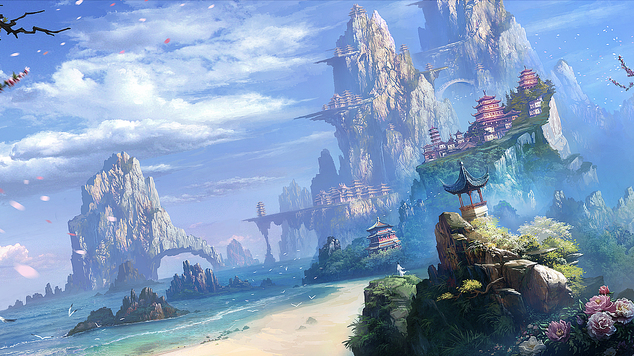 There is nothing better in this world than wuxia type martial arts movies (like The Swordsman trilogy and Fong Sai Yuk). Except for things that are better than that, like coffee in the morning, but that doesn't mean it's not good. Swordsman is kind of like a Jet-li movie, in an MMORPG, with <flash>triple jump</flash> and very fluid combat. We got the chance to get hands-on with this game and, without spoiling things, I'm slightly impressed.

First and foremost, our experience so far is limited to a single high level dungeon. The game is currently in closed beta, but this is with higher level characters in an actual dungeon with actual people, which is awesome. I played as a uh, Wu-tang I think, I could be wrong. Nevertheless, it was a girl with a huge sword. Like any wuxia based games, there is a lot of complicated story mixed in, but with 80 million Chinese players it is safe to assume that is a good thing.

You're given three different combat styles that you can switch from. I had two that used my giant sword and one that was fisticuffs only. You've got the standard modern skillbar with a limited number of action skills, the ability to triple jump (double in a dungeon), and some of the most fluid combat I've played in a long time.

For the skills, they were just, I don't know, had a very fast and tactile feel to them. I enjoyed how easy it was for me to move around and fight - but that comes as a consequence to the difficulty of the dungeon bosses. Dungeons have a different difficulty modes and can be ran as a group or solo, which is awesome for those who don't want to get all kung-fu in a group, but it's also important to note the difficulty. Even on the easy mode we played, with higher level characters, it was still a challenge in the dungeon. Not specifically a risky challenge, as we were over-leveled, but I could easily see how a lower level player would have to utilize the fluid combat in order to dodge and avoid events and access the mini-quasi-kind of quicktime events to recover from knockdowns. 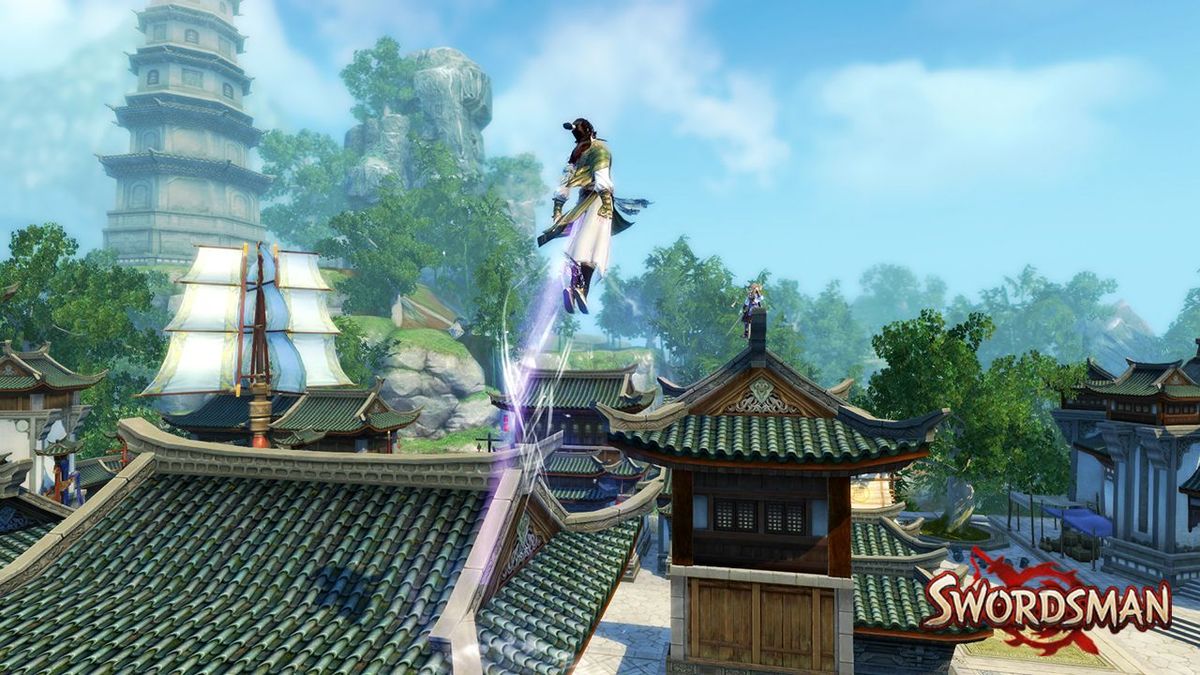 Outside of me gushing over the combat, the game includes all the Wuxia things you love, including being based on the novels by Louis Cha (penname Jin Yong) with the super fun unrealistic martial arts, different schools that focus on different weapons, and gender restrictions placed on schools (i.e. only males or females can join some specific schools).

One of the kind of neat (or not so neat kind of things) is the fact that the entire game is voiced in its original Mandarin with localized subtitles. According to Perfect World, this is by player request, but at the same time I'm not specifically sure if it was a money saving thing or if maybe Wuxia fans just love the original language. I'm not an expert, so I'll leave that judgment call to you. Then again, it makes future updates a snap as they only have to translate the subtitles, so there is that.

Tanks in Swordsman aren't all about aggro, but more so about control. Bosses and monsters have a mind of their own and just yelling at them isn't going to make them kung-fu you. You'll need to slow, stun, and mesmerize your foes as a tank to help keep them off your allies. DPS have a lot of mobility, to move in and get strikes off at the right time, and healers have many AOE heals focused around themselves so they can move and keep up with the combat healing everyone.

As a DPS, I did find that I had almost too much mobility. Not being acquainted with my skills, I found my character jumping around more than Neo in The Matrix. I'm sure after learning the abilities I would have more of a hold on what to do, but I can definitely say the mobility is there.

To go off-topic a second, one thing I do love is the destructible environment and optional bosses in the dungeons. I found a boss sitting behind some trees that you can cut down and apparently you have the option of hunting optional bosses and forgoing the time challenge or completing the dungeon within the time challenge for an extra reward (or doing both if you're good enough). 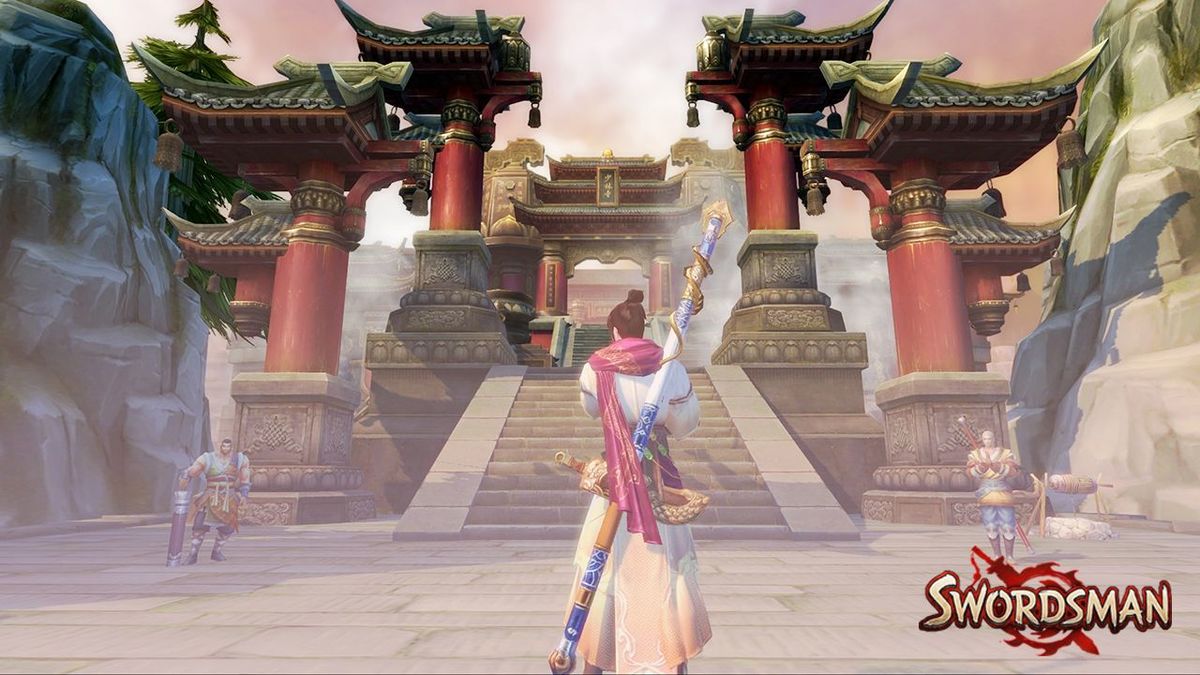 Story is a big focus in Swordsman, we got a good glimpse of the opening story along with the story that unfolds during the dungeon. There is a long running story from start to finish that you can follow, with cutscenes that pull your character into it. Speaking of characters…

Swordsman has a really cool fully featured character creator, so you can make your kung-fu hero any way that you want, from handsome and gorgeous, to looking like a forest troll. However you want to roll is fine with the game engine, as it has an almost infinite amount of sliders to toy with your character. That's awesome.

Some of the things that I didn't like was how confusing the game is. The classes are schools and there is a lot to absorb and a lot of text, like anything Wuxia, and unlike the movies you can't just turn your brain off and watch Jet-li punch things while cuddling up with someone on the couch Office Space style. There is a lot to learn, but apparently the newbie area takes a fine job of easing you into it.

The open beta is ongoing now and if you're interested in a really cool action MMORPG, then give this a try for sure. I was rather impressed by it at E3 and left the demo station craving more (which is why the client is downloading as we speak).

To read the latest guides, news, and features you can visit our Swordsman Online Game Page.