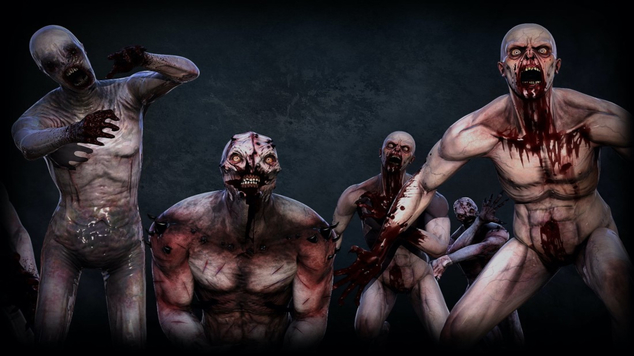 Killing Floor 2: Three Years After Release
Even though Killing Floor never secured the top spots in the lists of best cooperative games, it clinched an ar

Even though Killing Floor never secured the top spots in the lists of best cooperative games, it clinched an army of loyal fans and a score of 75 on Metacritic. It’s a perfect title for zombie games aficionados and lovers of not-so-hardcore shooters in terms of gunplay physics. Killing Floor 2 has incorporated the best of the original part and introduced new game mechanics, especially in the latest updates.

Speaking of the latest updates: today, we’re going to look back at the initial release of Killing Floor 2 and compare it to what the game has become. There were no drastic changes to the gameplay — it’s still a zombie-killing coop with tons of blood, gore, and ghoulish creatures. Yet, now the game features manifold more stuff than on its very start.

In the beginning, we had a little over 10 maps, 30 weapons, and 2 bosses. Tripwire fired just two updates with a few maps and weapons during 2016, and the game started gaining momentum only in 2017 when seasonal events and weekly outbreaks were introduced during the first Summer Sideshow update. That’s Killing Floor 2 as we know it for most of its time, let’s see what has changed next.

The major goal of each KF2 game is to clear out all the zeds at the location and beat the boss. However, some of the updates introduced new modes, where you have other objectives to complete to win the game (in the end, it still comes down to more killing, though).

Twisted Christmas 2018 update added Santa’s Workshop map, where you have to keep the Santa’s cart up and running, or else you’ll be unable to finish the round. Back & Kicked Brass brought back the whole objective mode from the 1st Killing Floor, in which you had to complete a series of tasks assigned to you by an NPC.

Aside from the regular level-up system, the game now also has prestige ranks that first appeared in Treacherous Skies update. Any player who reached level 25 of the perk can reset it back to level 0, gaining a modified perk icon, 2,000,000 Vosh money, and experience boosts for leveling up in the future.

The deadly squad of our old friends was expanded by adding rioters, which have a chance to spawn only on suicidal and hell-on-earth difficulties. Next, we were introduced to E.D.A.R robots, which are again uncommon enemies, yet can spawn on any level of difficulty.

As for bosses, there were many more updates than for zeds. At the start, we had only two bosses that spawned randomly in the last round of the game. Nowadays, we match our strength with five of them: along with familiar Dr. Hans Volter and Patriarch, we’ve got King Fleshpound, Abomination, and Matriarch.

Characters haven’t changed much in the base game. Only D.A.R and Oisten Jägerhorn can be counted as new playable heroes added into the base game since it’s the final release. To get the others, you must own other game titles or purchase DLC or Deluxe editions of the game.

Almost every major update features at least one map. Thus, developers have enriched the game with 14 maps since the first Summer Sideshow. Most of them were initially made by community members, not by Tripwire. The latest ones — holdout-adapted Biolapse, sinister Sanitarium, and mystery Ashwood Asylum — are all designed by independent content creators.

You can never have enough weapons. Every fan of shooters knows it. That’s why Tripwire regularly reconsiders the weapon collection of KF2 and adds new and new items with every update. 30 weapons in the base game? It’s kind of ironic.

In 3 years, the number of weapons has doubled. Now it’s hard to imagine the game without the M32 grenade launcher, road redeemer, husk cannon, and the rest of the amazing rifles.

Along with lots of stuff that evolved into a better version of themselves, some of the features have remained unchanged. Let’s review them, too.

Bugs, Especially During the Game Launch

Killing Floor 2 is notorious for taking forever to launch. Even with a mid-range gaming PC, you must stare at the screen for at least 5 minutes until you will see the game menu. No good for impatient people who’d rather launch another game than spend their precious time on nothing. After that, the game runs smoothly, but a century-long load window is quite annoying.

Another bug is related to the dosh vault crate, which never shows up outright when you purchase it. Tripwire even added a small notification that the crate may not appear until you restart the game. This happens all the time and it’s hard to justify the fact why Tripwire still hasn’t fixed this bug.

Another thing that hasn’t changed in KF2 is the loot system. We’re not sure it’s for good: there were many complaints on the Steam community that KF2 loot boxes often contain items not relevant to the user’s perks and playing style.

And indeed: now the game features a totally random loot system, where each player gets one drop in 12 hours, but only if their game session lasts more than 30 minutes. During most events, the drop rate increases by 3x. Seasonal events also increase the chance of “ticket” drop. Players must collect 5 tickets to collect a seasonal item.

The problem with this system is that it doesn’t feel like a “reward” for a skillful game, but more like gambling. Something similar to simple games of chance like slot machines, but without a spin button and with time restrictions. Damian Collins, a member of the British Parliament, actually classified it as gambling, considering that retrieved items can be sold for real money thereafter, sometimes for thousands of dollars. This applies, however, not only to KF, but to any game that features a similar loot system.

Daily objectives along with weekly outbreaks remained in place and turned into routine activities in KF2. This is the major way to earn dosh vault money as well as pump your skill faster: all games that are played as part of a weekly outbreak always have a suicidal difficulty, let alone specific game mechanics as a considerably complicating factor.

After Neon Nightmares, released in March 2020, Tripwire plans something for summer. And when winter and autumn updates are inseparably associated with Christmas and Halloween, summer updates were always authentic.

The name of the next community-made map has already leaked: Desolation. It will likely be an objective mode compatible map with a greater depth of game mechanics than an average KF2 map.

The minor changes will also affect weapons. For example, Seeker Six will get a slight damage increase, while Mac 10 will drop in price. In the latest announcement, Tripwire also added two free weapons and two additional items will be purchasable after the summer update. What kind of an update did they prepare this time? We’re left to wonder.

To read the latest guides, news, and features you can visit our Killing Floor 2 Game Page.