Mobile RTS Roundup - Beasts vs Bots and Dominations update
We recently had the opportunity to preview a pair of mobile RTS titles and found them worth a closer look. If s

Ten Ton Hammer hasn't traditionally shown mobile games much love. In our defense, mobile games haven't traditionally shown hardcore gamers much either.  Typically shallow gaming experiences and sporting vampiric revenue models, a handful of mobile titles are starting to deliver a deeper multiplayer experience just as the strategy gaming scene on PCs has gone from hallmark titles like Starcraft and Command and Conquer to a bevy of 4X titles to a big hazy question mark. Lately, two tablet-friendly RTS titles seek to show that tablets can be to strategy games what a gamepad is to a platformer.

Brains, money, and mobile-saavy: imagine John Schappert, a former SNES programmer and co-founder (and seller to EA) of Tiburon Entertainment (who made more than a decade of Maddens, NBA Lives, NHL Lives, and a couple NCAA and Arena Footballs for good measure) went into the Zynga executive blender with mobile tech guru John Osvald and came out ready to build their own studio. That's Shiver Entertainment in a nutshell, and their first project, Beasts vs Bots, was unveiled at E3 2015.

The premise of Beasts vs Bots is simple enough - robotic enemies are attacking earth, awakening beasts, the earth's protectors. As for us, humans and their cities are just in the way as the two rivals battle it out. As the beasts and bots harvest cities for steel in the style of the old Rampage arcade classic, the one resource needed to build more units, the human military will respond, ultimately calling a halt to the action after about 5 minutes of gameplay with a nuclear strike.

Within that five minute time period, players have to find and mount an attack on the enemy base. Dispensing with base building altogether, each level within the city offers a different and more difficult to dislodge enemy base position. Steel allows you to instantly build one of five units of ever greater power. Starting with cheap, plentiful units to harvest and scout (preferably harvesting around your enemy's scouted position),  players progress toward powerful units needed to confront enemy forces and destroy their base. 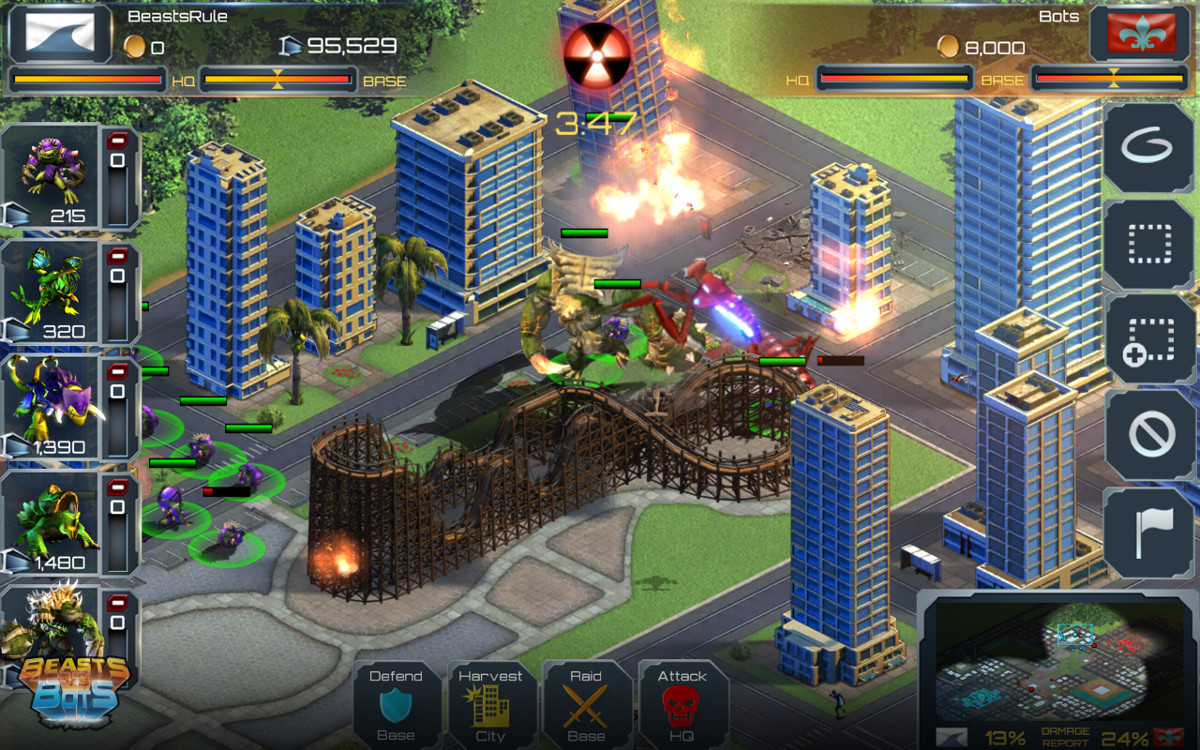 Given such a limited time scale, unit selection and management has to be streamlined, and it is. Individual units can be controlled individually, but a lasso tool allows you to select units within a finger-drawn circle around a group of units, and one of four command buttons allow you to command these units to defend the base, guard an area, harvest the city, or attack the enemy base (once it's found). The game seems to hinge on when the player decides to make the inevitable all-in attack - should you wear down the enemy's army first, or attempt an early base assault? Units have their own progression as well - over many matches players can develop units through 10 levels of advancement to compliment their play style.

Shiver is starting with east coast cities like Miami and Orlando (Shiver's hometown) and working their way up the US eastern seaboard before progressing to the west coast and then on to international cities, but there's no word yet on what cities will be included at launch. Expect to see Beast vs Bots on all mobile platforms later in 2015.

Big Huge Games' Tim Train has a host of impressive strategy titles under his belt dating back to the original Civilization, Age of Empires. and Rise of Nations, and his stated goal for DomiNations is to create the "Age of Empires for this generation." With 7.1 million installs, 210 million battles fought, and 272,000 alliances formed to date, it seems like he's done just that.

DomiNations at present has progressed up through the Age of Enlightenment, and the next step as revealed at E3 is the Industrial Age. New units include tanks, machine guns, and air units like the zeppelin and biplane that can attack individual targets for the first time ever in the game. Another new unit, the guerilla, is invisible to opposition buildings and can sabotage structures, further increasing the tactical options available to skilled players.

The next update will also include four new wonders - the Statue of Liberty, the Kremlin, the Brandenburg Gate, and the Eiffel Tower. Each provides interesting options and capabilities to the player who builds it. One of the Kremlin's features, for example, is that every destroyed farm produces partisan fighters, potentially slowing down an invading force. Look for these and more features to come into the game later in 2015 as well.

To read the latest guides, news, and features you can visit our Beasts vs. Bots Game Page.