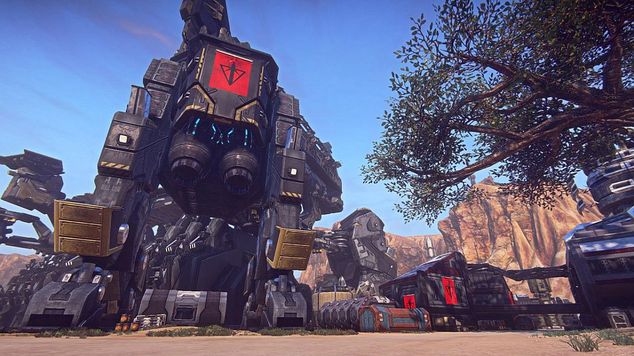 Planetside 2 for Playstation 4 Preview Interview
We had a chance to talk with Chris Bishop, 3D artist, and Bill Yeatts, the Art Director, on the PS4 with Planet

Planetside 2 is coming to Playstation 4 soon, June 23rd by my last check on the date, and it's time to get excited for one of the more fun FPS shooters to make its way console side. We recently spoke with Chris Bishop, 3D artist, and Bill Yeatts, the Art Director who gave us an overview of what's changing from PC to PS4 (not a lot, which is a good thing in this case) and got to check out some of differences in a recent preview interview (preinterview I call 'em).

First of all, I want to go over the biggest change. The island of Koltyr which I believe is half the size of the other island continents, is a newbie starting zone and will be exclusive, at least at the start, to the PS4 version. Koltyr, from what I have seen so far, is a really good thing for Planetside 2 because PS2 is sort of a complex game and it's hard, even with the instant action button, to get your feet wet around a variety of seasoned veterans. The good thing about Koltyr is that it's smaller (still a massive landmass) and has fewer spaces for players to question where to go over and, in addition, is BattleRank locked to BR 15, meaning that only serious newbies can play around on the map. You can leave to other areas, if you wish, and at 15 you'll get a respec to respend your certs and the such, so when its time to leave, you can take all of that knowledge with you.

The only other major change is the interface. For instance, in the loadout screen you move class page to class page, instead of having all of the information on one page as you attempt to navigate it with your controller. They've worked to make it very, very console friendly and players shouldn't honestly be too worried about trying to move through it. Unlike Defiance, which shares its console UI on both console and PC, they are making sure that the UIs remain seperate for two different input schemas.

Outside of that, there isn't much different. Daybreak will be working to make sure both versions mirror each other. To note, this won't happen at the start, there will be a few things that may or may not make it in, but utlimately they'll both be the same. The only thing that will be different are minor things like the UI, the shop to a small degree (you'll purchase things through the PSN shop with your PS Plus discount!), and the island of Koltyr.

I'm pretty excited to get in and try it. I just got beta access and hopefully will give the beta a go and bring back some first-hand impressions. Planetside 2 is currently free-to-play and the best way to hop in, in my honest opinion, is through Steam.

Terran Republic Soldier Character Model Revealed for Planetside Next
<p>Planetside Universe has gotten their hands on another image from <em><a href="http://www.tentonhammer.com/t