Rousey Goes To The Mat For Video Game Play

Ronda Rousey is a living legend in the octagon. Rousey was voted the best female athlete of all-time in a 2015 ESPN fan poll. Fox Sports described her as "one of the defining athletes of the 21st century.”

She was a pioneer for women in mixed martial arts (MMA), opening the doors to the widespread growth in the sport among women. Without Rousey’s impact, we wouldn’t be seeing women’s matches such as the upcoming UFC 251 bout between Jessica Andrade and Rose Namajunas as a headliner on the main event card.

Rousey is also an avid gamer. And she has been for many years.

While she was dominating the octagon, former UFC bantamweight world champion Rousey also sought to crush opponents while playing her favorite video games. Rousey remains a huge fan of Pokémon. She’s also dabbled in Jak & Daxter, Taichi Panda and The Legend of Zelda: Ocarina of Time.

As well, Rousey holds a fondness for Mortal Kombat and World of Warcraft.

"Gaming has always been a huge part of my life,” Rousey told Business Insider.

Rousey offered her opinion on what makes for a good video game.

“Games have to be fun and entertaining,” Rousey said. “To me, games are like movies. I get emotionally involved. I also love how games get creative on different levels.

“I love role playing games like Jak & Daxter and The Legend of Zelda. Repetitive and boring games drive me insane.”

Since leaving UFC for the WWE in 2018, WWE Raw champion Rousey has found more free time to dive into her gaming hobby. In February, she joined Facebook Gaming. Rousey regularly live streams on the social media site playing her favorite video games.

“Game streaming is one of the rawest and most authentic mediums, and the time is right for me to jump into the stream exclusively on Facebook Gaming with the #RowdyOnes,” Rousey said in announcing her move to Facebook via her Instagram feed.

"As many of you know, I have been an avid gamer most of my life and if you don't know, now you know. I'm super excited for us to geek out together.

"Through my streams, people can hang out with the real me, not the 'character' version of myself they're used to seeing, though the 'Rowdy One' can't always be contained!”

She went right to the well of her personal favorite to launch her live streaming gaming career. Rousey opted to play Pokémon Sword and Shield during her first appearance on Facebook Gaming.

Pokemon Player From Way Back

Long before she gained fame as “Rowdy” Ronda Rousey, the ex-UFC title belt holder was obsessed with Pokémon. Nintendo’s iconic pocket monsters have always held a place dear to her heart.

At the age of 16, Rousey served as a moderator for a Pokémon forum on GameTalk.com. A 2008 Olympic silver medal-winning judoka for the USA, her screen name was Judospiff.

"One Mew-sized Mewtwo, 'cuz everyone knows that even though Mewtwo has better stats than Mew, 100 Mews totally overcome that," Rousey explained.

However, the Pokémon she would select to fight against among all possibilities would be perhaps not surprisingly considering her background, the judo-inspired Throh.

“He's the Judo Pokémon and would challenge me the most,” Rousey suggested.

Not A Fight Fan 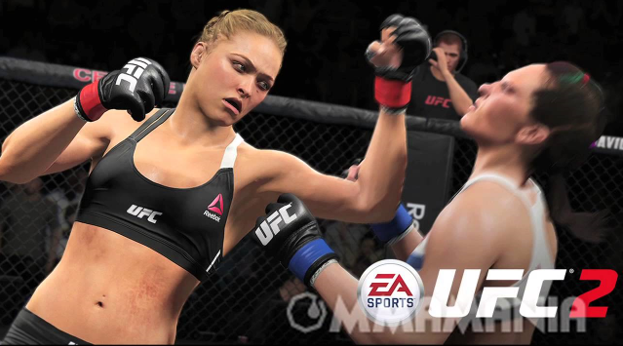 Though she was featured on the cover of EA Sports UFC 2, Rousey insists she isn’t a fan of video games that involve fighting.

Despite her background in judo, MMA and wrestling, when Rousey throws the switch to turn on her video game player, she would rather not fight.

The only fighting game that really appears to hold any appeal to her is Mortal Kombat. She lists Princess Kitana as her favorite character in that game.

“I would always play as Princess Katana 'cuz in the Sega version you could press down and punch up vs the computer and get to the fifth guy from the top with all flawless victories, because the computer wouldn't learn to throw you from the floor until it was almost the end,” Rousey said.

Rousey provided her voice to the character Sonya Blade in Mortal Kombat 11.

“I like a fighting game once in a while,” Rousey explained. “I can’t stand games that are super serious slash slash ‘em blood and guts games.”

Rousey plays as a Night Elf Hunter in WoW. However, she said she’s also working at leveling a Blood Elf Rogue.

In Taichi Panda, she mains a mage named Randa.

Rousey seemed to be of two minds when it came to naming her favorite Dragon Ball character.

“Vegeta for sure,” she said. “Goku is such a goody goody that he'd be fun to be friends with but I'd get annoyed hanging out with him after two weeks, let alone after a whole year.

“I'd imagine that Vegeta and I would have many an interesting debate. Probably not about politics but maybe like societal stuff.”

Video game inspired slots
If you can´t get enough of your favorite game, it is nowadays easy to continue playing even outside your home o
Feature
Other

Should You Try to Become a Professional Slots Player?
Can you imagine turning online slots gaming into a profession?