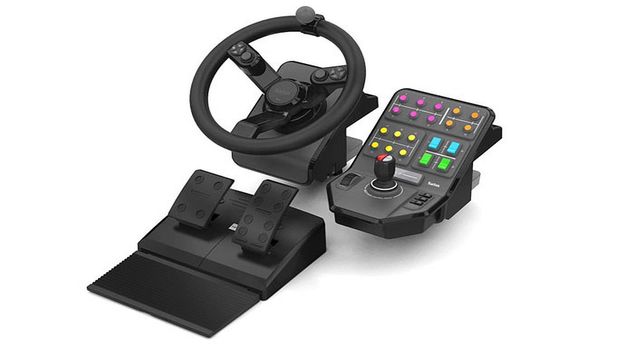 The Saitek Heavy Equipment Precision Control System for PC, is a three piece set compromising of a steering wheel, pedals, and a side panel with around 30 additional buttons to expand functionality in games like Farming Simulator and to help create a simulated and immersive experience in controlling various farm equipment in the game.

One of the things I’d like to say right out of the gate – the game has a lot of buttons to press, and the “bumper crop” load of buttons that this set has is designed to help offset the need for the plethora of buttons needed, plus control things like the wood harvester or any other crane machinery.

As for long term durability of any components, I’d like to make a quick comment that while I haven’t had the set for more than a week, it has held together rather well, but a Saitek gamepad I bought 15 years ago still works and functions perfectly, even though it’s cheap plastic, and was already in the budget bin back then (I still remember the price, $9.99).

The steering wheel and pedal are an impressive feat of tractor simulation engineer. The wheel itself has no dead-zone, tested in a variety of applications, although in something like Euro Truck Simulator if you move it just a cm over, the wheel might not specifically move in accordance graphically, but the game will register and your tractor trailer truck will move just a bit.

On the wheel are two thumbsticks, a d-pad, and a similar d-pad with four buttons. Two buttons on the back of the wheel, and a turn-knob. Oh, plus don’t forget the horn. As someone who grew up on a farm and drove a few tractors in my time, I can say that their claims about it being an authentic experience are rather true. 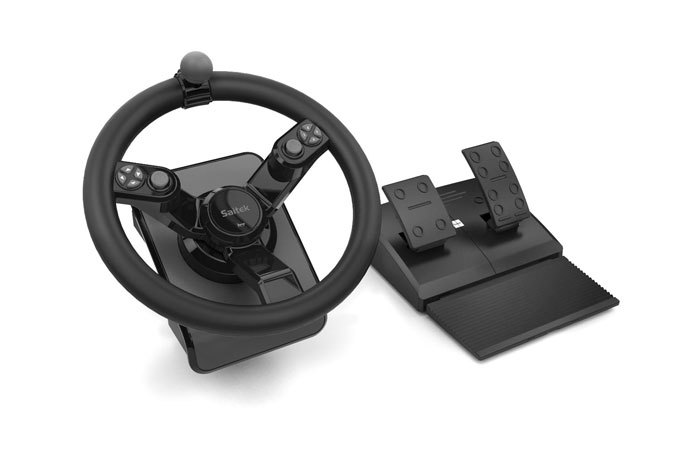 The pedals don’t have a clutch, but they do have gas and brakes, and operate sufficiently well, although they’re completely plastic (no metal). One tractor I drove IRL had wooden blocks for the gas and brakes, so I mean, for something like this it’s not a huge deal they’re no metal. They stuck to the carpet and didn't shake around and I didn't notice any issues. If you want to use them for racing, while you don't have a clutch, the side panel's loader stick works wonderfully as a shifter.

This isn’t a racing wheel, this is a professional tractor driving wheel, but that’s also not to say you can’t use it for doing some racing as well, which we’ll go into in a bit.

The wheel is center sprung which is really important, for many reasons, and functions really well. It’ll return to 0” rather quickly, and is impressive that it’s capable of doing so.

The buttons work well and for some games, like Euro Truck Simulator, the thumbsticks work super well for moving your head around while driving to look our your mirrors or in Farming Simulator for walking around outside in the open world.

The steering function, as stated, had no dead zone for me. Turning it felt amazing and the turn knob felt so very natural, especially for doing things like using the keyboard, or attaching the steering wheel to the side of my table so that I can make minor adjustments with my right hand.

Build quality is great, although it is pure plastic. The clamp has a rubber backing to help protect your table, and it’s not too heavy

This is where the money is in this package, and for many players of games like Elite Dangerous or any other flight sim, it’s pretty much one of the neatest, coolest, and most applicable things you could use. With around 25 buttons you could program to do whatever you want in a game, plus the loader stick which can double as just a regular joystick or for POV or whatever you want it to be, it’s really awesome. 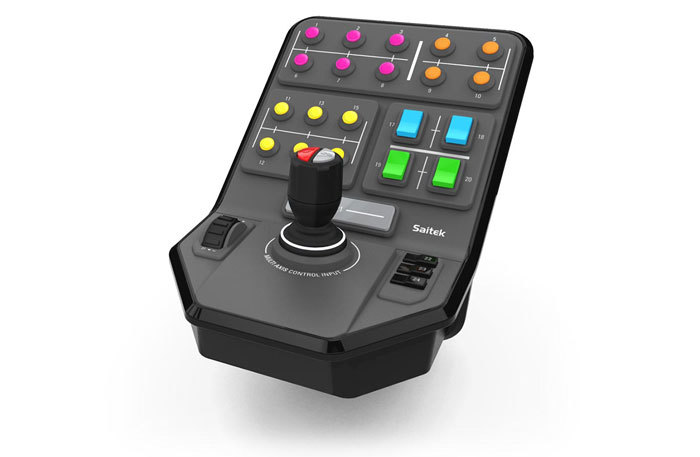 In Farming Simulator, it’s really good for woodcutting. You can control the crane by moving the thumbstick on the wheel, while adjusting the crane itself to get it to that perfect spot to saw wood. The loader stick has lots of uses, in a variety of means from adjusting loader spouts to fine tuning where the chainsaw is supposed to go (especially considering you can twist it for even more functionality).

Actually, farming wood becomes so much fun with this, because you’ve got so much going on at once that you’re controlling and it all comes together rather beautifully into one immersive wood farming experience. Meanwhile, the various buttons and other controls do the same.

The side panel also has a variety of uses in a few other games, which we’ll go into, and isn’t just purely for Farming Simulator (although it works beautifully out of the box for such).

In Farming Simulator, the combination works flawlessly to create an immersive tractorin’ experience. I was already rather a fan of Farming Simulator to begin with, but this actually made it even more fun considering you’re steering the tractor around while controlling the various other bits on the side. It gives you more to do and creates a really fun experience.

While there is probably an overkill assortment of buttons, that’s not a bad thing. You can rebind all of the keys and assign even more to it. So while you may only need 5 or 10 keys per machine, you can easily add additional functionality, plus there are buttons for settings, adjusting the map, etc.

The thumbsticks really help the on ground movement, so that you don’t have to pull out your keyboard and mouse to walk around. If I had to say the wheel had one defining feature, it would be that it’s perfect for any game which has both driving and FPS capabilities. I’m halfway sure you could probably enjoy playing Grand Theft Auto 5 on the wheel itself, although I haven’t tested it yet.

This set actually works wonderfully for ETS2. Mind you, while I drive mostly automatic, you can use the bumpers on the back of the wheel for gear changing. The thumbsticks work very well for moving your head around to get the perfect look out of one of your side view mirrors.

I took the set on a spin across Europe in ETS2 and had loads of fun. As a huge fan of ETS, it’s not unreasonable for me to already be having fun in the process, but there was something really cool about adjusting the GPS and various light settings and wind shields all on a side control panel and not having to use the mouse.

While obviously the wheel itself isn’t of much use, the side panel is actually super nifty and is a lot of fun to use in the game. Elite has a lot of buttons that need pressing, and after getting comfortable with the side panel, it actually was a rather fun and useful boon for launching hard points or opening up communications with someone else.

While I don’t have a VR headset available, I’d imagine the console would be kind of cool, if you can remember where the buttons are, but I didn’t test it.

That’s not to say it’s necessary and you must go out and buy it now, but if you had a joystick then this would make a great companion for your other hand.

If you love Farming Simulator or Euro Truck Simulator, then the full bundle is a worthwhile investment. The system functions to specification, everything is made rather well (I swear nothing from Saitek has broken on me yet), it’s all solid materials. While it’s all plastic, you don’t really get leather handles in most tractors, so I don’t really see much of an issue with that. The side control panel, which is sold separately, works well for a wide assortment of any kind of game that has lots of buttons to press (Flight Simulator, XPlane, Elite Dangerous, etc.)

Highlights include a large number of buttons, solid clamps (that have rubber on the heavier steering wheel to help protect your desk), no deadzone on the wheel, thumb joysticks for moving around on foot, and a rather immersive and fun experience, once you’ve learned which buttons do what (by default, they remain thematically similar in Farming Simulator).

Nitpicks, I would say, is that the pedals are just alright. There isn’t anything special and you don’t have a clutch, which makes them “useless” for racing sims (unless you drive automatic, then it’s perfectly fine) and this isn’t a racing sim bundle, so it’s not even worth to bring up much. The loader stick is a bit sticky, but that’s because it’s mostly for four directional movement, opposed to being just a joystick.

The bundle retails for $299.99 but you can buy each piece separately, or $149.99 each for the pedals/wheel and the side control deck. It works out of the box for Farming Simulator 2015 and is programmable for any other game you wish.

Disclosure: We received a review unit from Saitek.

To read the latest guides, news, and features you can visit our Farming Simulator 15 Game Page.