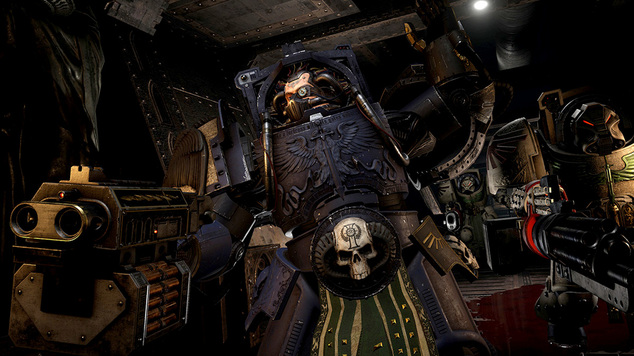 Few Games Workshop properties lend themselves better to a co-op FPS envisioning than the Space Hulk boardgame dating from the late eighties. So good a prospect is Space Hulk, in fact, that four other PC titles spanning three decades, one mobile game, and one card game have attempted to capture the tension of the original table top game, and found mixed success. Space Hulk Deathwing revisions Full Control APS' previous formula by shifting the perspective from isometric and tile-based to first person and real time, a change that reveals the real glory and horror of the characters and environments in a three dimensional space for the first time.

For those unfamiliar with Space Hulk, the premise is that the player is part of an elite Space Marine team sent to reclaim a derelict ship swarming with Tyranid Genestealers. Other threats found in the board game (including nightmarish Chaos gods, transient orks, and Warp Demons) were not in evidence during our recent demo, nor did we see anything indicating players can play as the genestealer side. That said, anything seems possible given the modular, programmatically created basis of the game.

Streum On Studios' take on Space Hulk adds an interesting mix of puzzle game and mechwarrior adaptation to the realtime space horror Rainbow Six-inspired squad-based mashup. On the puzzler side, players have to decide which doors to kick down and permanently lock as they work their way through the ship, preventing enemies from attacking (or allowing attacks) from already cleared parts of the ship, but also depriving players of escape routes and backtracking. On the mech side, limbs have their own set of hitpoints. Loss of an arm deprives players of a weapon or shield hardpoint, loss of a leg slows the player considerably. Lose it all and, you guessed it, you're dead. 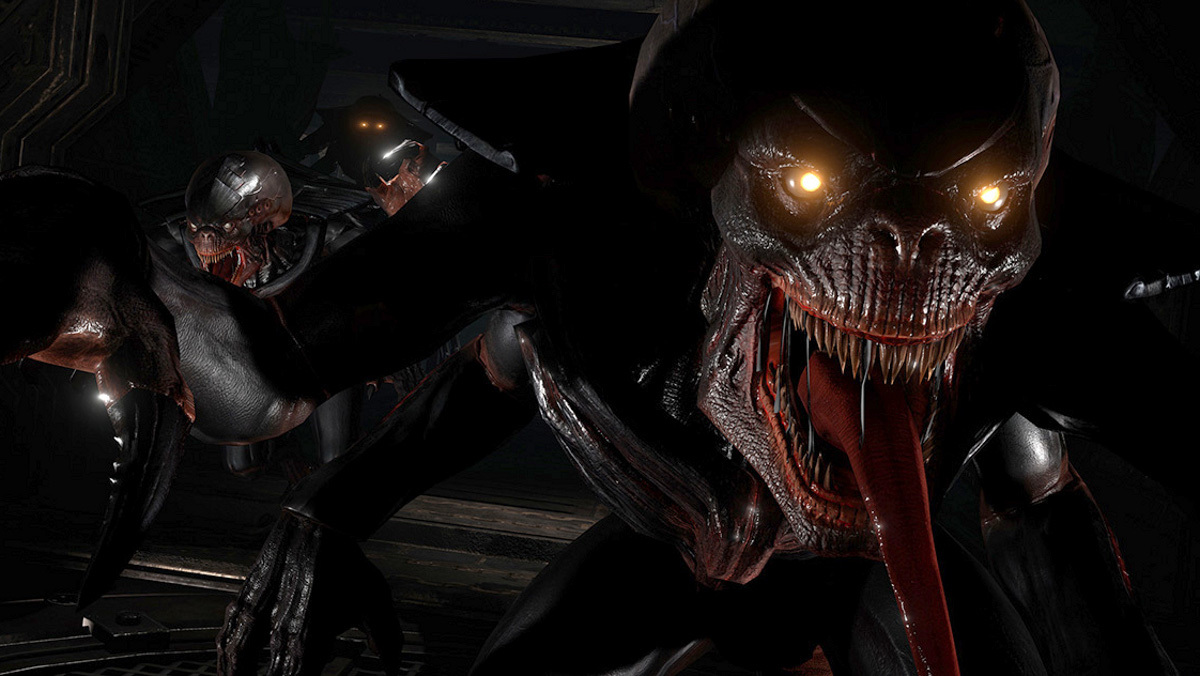 AI squadmates can be quickly assigned to guard a path or part of a room - something which seemed to come in handy in ring battles where enemies spawn in quantity from multiple locations at once. Realtime assignments make for some interesting tactical options. You might equip one squadmate with claws or a shield and hammer, and station him to protect another squadmate with a flamer - a wicked ranged AoE damage weapon that spreads flame perhaps 20 feet ahead that didn't seem to dissipate at all - or a bolter, an outsized take on a machine gun. Or another teammate with low health might be sacrificed to create a chokepoint in a wide and troublesome corridor.

And everything in Space Hulk: Deathwing is outsized, not to mention deliciously gothic and romanesque in keeping with the space marine mythos. Gameplay aside, since we can't fully judge how the game handles without a playtest, it's clearly the visuals that set this game apart. I'm not versed well enough in Warhammer 40k to offer specifics, except to say that the game looks and sounds more like a Warhammer 40k game than any other I've played. The space marines have heft, their suits are painstakingly ornamented and exquisitely detailed, the voiceovers lofty and platitudinous. While a significant part of each melee battle is spent with ludicrous genestealer gibs fully filling the screen, ranged combat and the interfaces for squad orders and equipment management seemed slick and intuitive.

Previous complaints about Space Hulk adaptations, namely those regarding short and unfulfilling single player campaigns, may or may not be addressed, as we didn't hear anything about the campaign mode. But for Space Hulk fans in particular and Warhammer 40k fans in general, Space Hulk Deathwing may well fuse tactical depth with worthy visuals at long last. Look for it later in 2015.

To read the latest guides, news, and features you can visit our Space Hulk Deathwing Game Page.