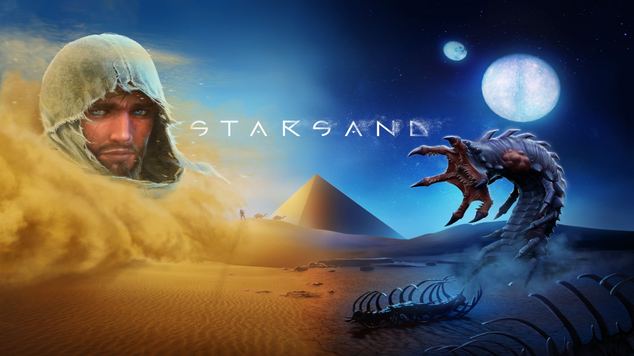 October 25th, 2021 - Starsand Demo is available now on Steam! Get your adventure started and find out more about the question: Where do you want to die?

Starsand will release on November 4th into Early Access. Developed by Tunnel Vision Studio and published by Toplitz Productions, Starsand is inspired by a real tragedy during a desert marathon in the 90s and classic sci-fi works like Another World, John Carter and Stargate, and tells the story of a stranger in an even stranger land.

The first-person survival adventure sees players wake under unfamiliar stars after seeking shelter from a sandstorm during a desert marathon. Stirring under the light of two moons gleaming in the sky, with strange yet familiar pyramids far on the horizon, survival is just the beginning. To return home, the mysteries of the planet must be unraveled.

Set against a harsh arcane desert, Starsand invites players to construct weapons and defenses,build up shelters, fight strange creatures and explore a vast and hostile environment in their quest to return to Earth. With unpredictable weather, an impactful day and night cycle, as well as deep crafting mechanics, Starsand offers players the freedom to explore a huge landscape filled with strange creatures and artefacts.

Starsand can be wishlisted now on Steam and is set to launch into Early Access on November 4th, 2021.