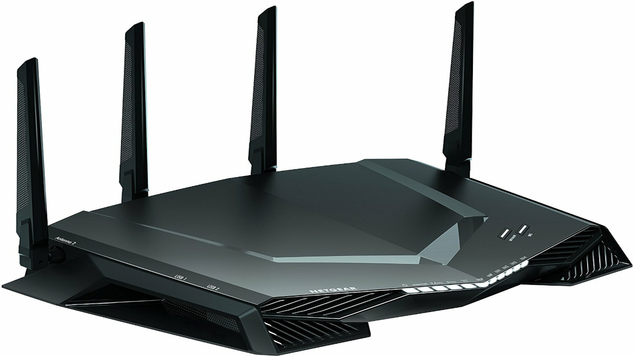 Usually we recommend a wired connection for your gaming machines, but the latest wireless kit doesn't just match wired connections for speed and latency, but for reliability too. A wired connection might have a slight edge, because many gaming PCs don't come with wireless networking as standard, though this has improved with the latest CPUs and motherboards. Plus, you can easily add Wi-Fi support to your PC with a USB Wi-Fi adapter.

If you're playing on one of the best gaming laptops it's unlikely to omit wireless compatibility, though for some laptops wireless will be your only option. Getting your network up to speed is paramount for a modern smart home, to boost the connection to your Smart TV, consoles, tablets, smartphones, and everything else that needs a decent internet connection these days. And if you live in a sprawling home, then a Wi-Fi range extender may help too.

We've tested a host of gaming routers over the years from the likes of Asus, Netgear, TP-Link, Linksys, D-Link, and more. The following are the ones that stand out to us as the best routers for gaming specifically, but that's not the only feather in their cap.

The best gaming router of 2021

The Asus RT-AX88U is the best choice for a high-end router. It features next-generation Wi-Fi 6 (802.11ax) technology and an impressive eight Gigabit Ethernet ports, supporting link aggregation. Backing this up is the usual excellent AsusWRT interface, which allows granular control of every imaginable setting. There is also class-leading Adaptive QoS, along with Trend Micro antivirus and the WTFast GPN—all with subscriptions included for the lifetime of the router—which are standouts among competing routers.

While the 2.4 GHz speeds are adequate, the 5 GHz speeds are where the RT-AX88U shines. Furthermore, for gaming in a congested environment, this router outdistances the competition. Sure, next-generation 'super router' performance comes in at a shocking $346, but given these benchmarks, at least it's justifiable.

The latest Nighthawk is a superb gaming router

-There are Wi-Fi 6 routers for way less

The Netgear Nighthawk Pro Gaming XR700 is a strong follow-up to the XR500, which impressed us last year as it was the fastest router we had tested to date. Both are part of the company's 'Nighthawk Pro Gaming' networking line of products—but the XR700 is even faster than its predecessor.

The XR700 has plenty of the right ingredients, with one WAN and six LAN ports for enough wired connections, support for link aggregation, and even a 10 Gigabit LAN SFP+ port for ridiculous Ethernet bandwidth. Let's get it out of the way. With all the attention on the wireless market heading to 802.11ax/Wi-Fi 6, this XR700 uses a combination of the last generation 802.11ac/Wi-Fi 5 wireless and 802.11ad technology (that's the 60 GHz frequency one), which unfortunately has not gone mainstream. It also supports Beamforming via four active antennas.

Another highlight of the XR700 is the gaming-centric Duma OS, which boasts Geo-Filter tech to connect to the closest server when gaming. The XR700 has granular control of the bandwidth, prioritizes throughput by each device for both the upload and download separately, and assigns a specific percentage for each device to balance the load, thereby preventing any single device from becoming a bandwidth hog.

The XR700 is a strong all-around performer in our tests, starting with the 2.4 GHz frequency with some of the fastest scores to date of 284 Mbps at close range and 225 Mbps on our far test. This continued on our 5 GHz testing with strong 325 Mbps and 332 Mbps scores at close and far ranges, respectively.

The Asus ROG Rapture GT-AX11000 is designed to be the class-leading, 'best of the best' gaming router, and looking at the hardware specs, it delivers—big time. Building on the prior routers of this series, the Asus ROG Rapture GT-AC5300, and adding in Wi-Fi 6 technology, it promises a lot. This router uses a dedicated 2.5G Base-T port for higher wired bandwidth and four Gigabit LAN ports, although we prefer the eight ports that other Asus routers offer.

On the wireless side of things, this is a Wi-Fi 6 tri-band solution offering more than 10 Gigabits of wireless bandwidth, along with DFS bands to avoid interference. Additional gaming-centric features include integrated WTFast, VPN Fusion to segregate gaming traffic from VPN for maximum throughput, Dynamic QoS to prioritize gaming traffic, Games Radar (no, not that one) to check the ping times to different game servers to minimize latency, and for those that prefer a more colorful surrounding, Aura RGB.

Running the Asus ROG Rapture GT-AX11000 through our testing left us seriously impressed. While the 2.4 GHz speeds are decent 171 Mbps on the far test, the 5 GHz speeds are exceptional, with one of the fastest throughput speeds of any router so far at 334 Mbps. Oh, and we don't even have an 802.11ax USB Wi-Fi adapter yet, so this is using 802.11ac gear on the client-side. Yes, this router is really that good.

The easiest gaming router to set up and manage

TP-Link's latest high-end gaming router is a significant improvement over previous models and now ranks among the best gaming routers around—especially when it comes to the 5GHz range, at which it excels. Our review of the TP-Link Archer C5400X saw us awarding it near-top marks. We love how easy the C5400X is to set up and use while still offering strong features: the ability to manage QoS easily, the inclusion of network security (via Trend Micro), and options to not only blacklist but also allow certain devices.

In terms of the throughput speeds, our tests clocked the following for the Archer C5400X: at 2.4GHz, it delivers 117 Mbps near and 112 Mbps far, which is somewhat middling, while at 5GHz, it performs extremely well, clocking 344 Mbps near and 347 Mbps far. From this perspective, it's market-leading.

What disappoints, if anything, is the lack of specific tech to decrease latency, which you see in competing models of the same price, like the Netgear XR500. In terms of ports and antennae, it's near-identical to the superb Asus ROG Rapture GT-AC5300 but doesn't quite offer the same performance. It is, however, a cheaper alternative and a highly recommended gaming router that's pleasingly easy to set up and manage.

Wi-Fi 6 is spreading across product lineups, and the Nighthawk AX4 is an excellent example of what this spec can accomplish, even on a more budget router. The Nighthawk AX4 does not have flashy colored stripes and LEDs of high-end gear. Rather it has a horizontal orientation, with two external antennas, four Gigabit LAN ports, a single USB port, and a row of green indicator LEDs.

The Nighthawk app handles the interface, although it can also be used via a web portal, this is also more generic, as you won’t find the DumaOS here, but the more familiar Netgear one. There is also QoS (which is a simple toggle on or off) for gaming. Still, there is no granular control to better balance gaming needs and video streaming across multiple connected devices to optimize the experience better.

Why would I particularly want a 'gaming' router?

Gaming routers can prioritize traffic to your gaming PC and consoles—they're built to be greedy. The best gaming router reduces lag during your online game sessions, even if other devices in your household are streaming or downloading. If you've had the same router for years, it might be the right time to consider an upgrade if you want to get the most of your internet.

Given the potential for Wi-Fi connections to have hiccups, we would always suggest, where possible, to have your gaming PC wired into your router directly. Failing that, by a Powerline connection. Wireless connections are getting more effective, and Wi-Fi 6 is good enough that wireless VR streaming is actually now possible. And if latency creeps in there, that's when you throw up.

The best gaming routers have multiple LAN ports for wired connections—which are preferred—but most differ from ISP-provided gear through the use of the latest Wi-Fi standards, such as 802.11ax, aka Wi-Fi 6. This means faster and more efficient wireless data throughput for a greater number of devices. That last bit is key to rock-solid wireless performance in an age of smart devices and appliances.

Can I use any gaming router with my provider?

Before you splash out on a new router, you will need to make sure that it is compatible with your current ISP. Some ISP-provided cable modems, for example, don't offer pass-through connectivity to allow a high-performance router to be paired with it. So it's important to make sure you're not wasting your money.