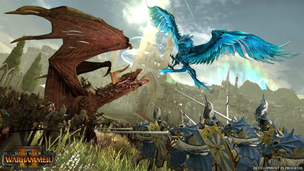 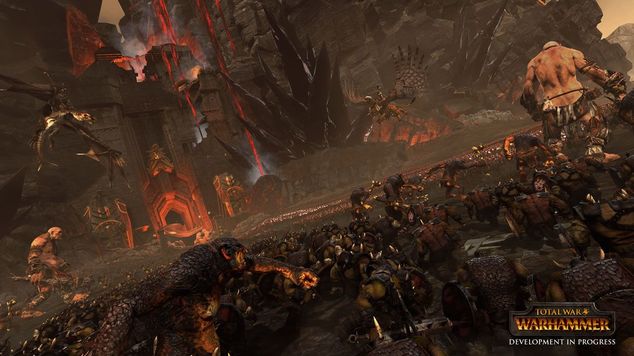 Total Waaagh! - Total War: Warhammer Revealed at E3 2015
Total War is coming to a sci-fi universe near you, specifically the Warhammer universe, and we have the details

Creative Assembly shocked Total War grognards and thrilled Warhammer fans with their April announcement of Total War: Warhammer, a radical departure from their historical grand strategy lineage. Things became a little more real at E3 2015 when we were among the first to see the Battle of Black Fire Pass - an Emperor Karl Franz era re-creation of the borderlands clash between the Empire and the Greenskin hordes deeply ingrained in Warhammer lore. Since filming wasn't permitted, we'll do our best to walk you through our first experience of Total War: Warhammer.

Thousands of units industriously and individually fighting it out on a macro-to-micro scale is exactly what makes Total War games unique, and Total War: Warhammer looks to have this in spades. Yet, apart from the obvious departure from real human history and the trappings of the Warhammer universe, several things will make this game distinct from other titles in the storied Total War franchise. 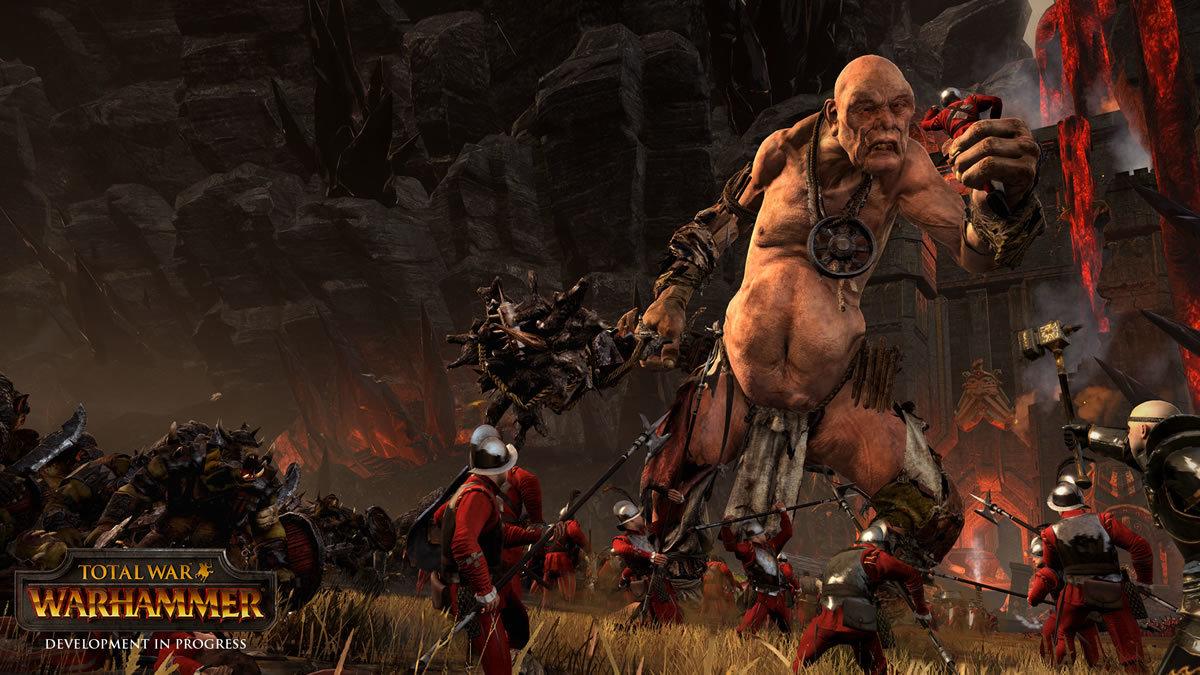 The most obvious feature that sets Total War: Warhammer apart from the other TW games is the sheer scale of the units, both in terms of actual size of the units and the outsized impact of certain single (yet incredibly powerful) units. Giants, complete with creepily undulating flacid post-partem belly, occupies at least as much screen real estate as perhaps any man-made object that you've ever seen in a Total War game, even on the order of castle keeps.

But big things also come in small packages. One goblin shaman, casting Curse of Da Bad Moon, flattened half of a regiment of Outriders with a floating moon object oozing green stink streamers. When it comes to trade-offs between vulnerability and damage-dealing potential - with balancing the hitpoints of a few heavy hitters with a hordes of Goblin Spearmen, Empire Halbardiers, and other relative cannon fodder - Creative Assembly will have their work cut out for them like they had in no other Total War game. 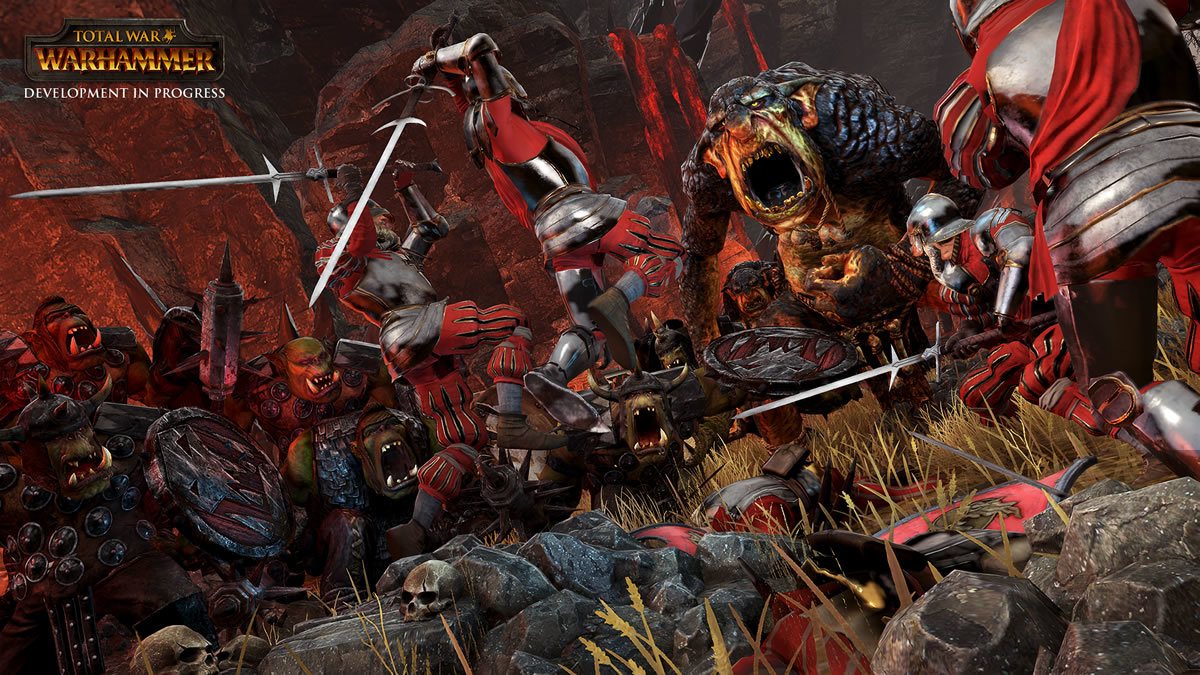 For those of you keeping score at home, we saw a couple other AoE units: an Orc Shaman (casting "Foot of Gork", a massive ghostly green deity creating a shockwave with a stomp), loads of Empire siege units such as a Helstorm Rocket Battery, a Helblaster volley gun, a Great Cannon, a Steam Tank, and a magical cannon called the Luminark of Hysh. The Empire side was all very conquistador-y and posh, but you couldn't help feeling a little sorry for our human counterparts in light of the sheer scale and wicked hilarity of the Greenskins and their abilities.

Another unique feature of Total War: Warhammer is that flying units will take the field for the first time ever. This was at the forefront of the demo - the Empire leader, Empire Karl Franz, did some speechifying while riding into battle astride Deathclaw, the mightiest of the Imperial Griffons. A bit later, after victimizing an enemy Orc Warboss riding a Wyvern, the Franz landed and did some claw-flashing pirouttes on a regiment of greenskins, sending. These flying units can fight in the air and on the ground, but it wasn't clear if they could attack air to ground or take damage from the ground while in the air. 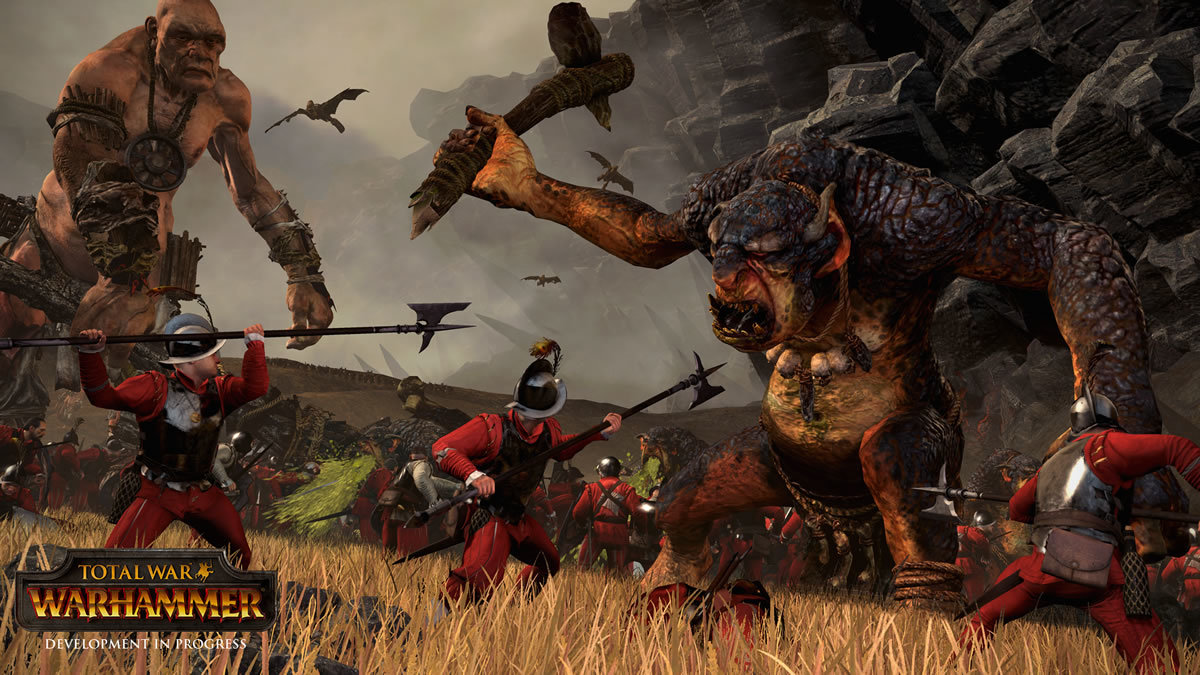 Creative Assembly also highlighted the unprecedented control players will take of individual units, and this will apparently go beyond casting hero abilities. For example, Goblin Doom Divers can apparently be flown - i.e. directed while in flight - into ranks of enemy soldiers to deal maximum damage.

For those of us hoping that a Total War treatment of the American Civil War or [insert twentieth century conflict here] would be next, seeing magic, massiveness, and comedic mayhem feels just plain wrong. But for Warhammer devotees who spent long evenings around tables fighting miniature battles much like these, your game seems to be in good hands. We'll never know whether or not Sigmar's Empire-founding victory was relived in LACC Meeting Room 318 - the demo came to a close with a Celestial Wizard casting a Comet of Casandora in the middle of the fray. What is clear is that Creative Assembly is having fun with this one and uncharacteristically taking some chances.