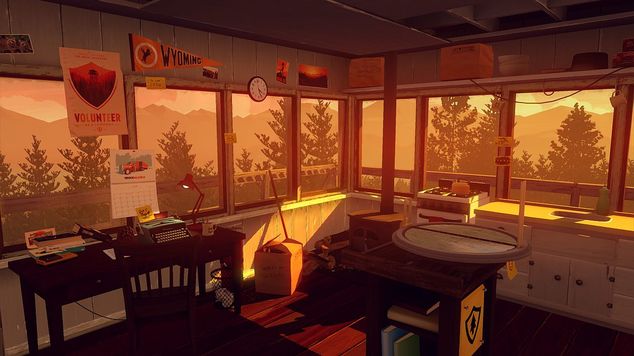 A Simple Spoiler-filled Review and Synposis of Firewatch
David tears Firewatch apart, giving it his simple review, full of spoilers.

Firewatch is a game about humanity, ultimately, a story about being Human, and it’s both a very good and very bad game. I can’t honestly review it, because to do so, I would need to spoil it to properly describe what is and isn’t wrong. Using buzz words to skip over plot points paints way too rosy of a picture of a game that I feel is both a massive failure and success, which is why I’m going to first give a quick general synopsis of the plot, and then follow it up with my opinions on it.

Your character, Henry, is a middle aged man whose wife had early onset dementia. After you choose your various origin story problems, you decided to run away from your problems by being a summer park ranger, and basically living in a fire lookout post in the middle of the forest in order to just get away from your problems for a while. You meet Delilah, your boss, who keeps you company for the rest of the game through the radio.

Early in your new career, you run across two teenage girls firing fireworks, who later go missing. You then do some menial tasks like reporting a phone line down and some other chores, at which point you’ll be at the lake fishing, where the game’s one jump scare occurs, you find a clipboard with radio transcripts between you and Delilah, along with a radio that can listen in on yours, you’re then hit in the head with a rock. At this point, you find out there is a fenced off campsite that you can’t access. After retrieving an axe to break-in, you do so, discovering logs of your conversations and reports, at which point you leave and it burns down.

At this point in time, you and Dalilah argue back and forth about if you’ll be blamed for the fire that happened at the walled off campsite, the missing girls, etc. After using the locator tool you found in the campsite, you discover a backpack with the key to a cave you seen at the start of the game. A little bit of exploring, you find Ned’s (a previous park lookout’s) son’s hangout area and some pitons (posts used to climb walls) and a note from the child about him hiding them from his dad. Then, in rummaging through the cave, you find the depressing end to their story.

You return back to your lookout tower, do a few more things, find Ned’s campsite and a tape where Ned argues that his son died in an accident, while being left to morally deal with if he was or wasn’t guilty with yourself. At this point, the wildfire going on is too much and you’re told to evacuate. You can ask Delilah to wait for you or not, but no matter what, she doesn’t. In the end, she goes her own way, you go your own, and nothing is therefore concluded.

The game, as a game, and on its merits as a game is bad. There is a lot of pointless walking through scenery that goes from gorgeous to bland and back around again. The game is linear and your choices only really impact various dialog bits as you trudge through a world often washed out in brown. The game is short, I took about three hours while taking notes for our guide, without a walkthrough.

The game elements are really bad and the story isn’t much better. Most of the dialog is trite and just idle conversation. The game will interrupt a conversation that you really want to finish with some new observation, or you’ll have to stand by a tree and wait for your conversation to wrap up to bring up some new element. Outside of a few moments, it’s often trite, and the pacing is either way too slow or way too fast.

Yet, at the same time, the game shines through on the fact that being human sucks sometimes, and being in the 80s with only a two-way radio to talk to your supervisor probably wasn’t fun. There probably was a lot of standing around doing nothing and being spooked by every noise in the silence of the forest. That is where this game does come together, it’s a right proper humanity simulator, and it simulates humanity better than many other games before it.

The mystical story of Henry fighting some major government conspiracy just turns into some weird pseudo-mystery involving a deranged hermit who lost his son. The game tries to throw lots of red herrings your way, like a weird conversation with Delilah that was never touched on again with my play through and Henry’s weird Julia dream that never was touched on again (outside of being mentioned).

Where the game shines though, is the fact it gets something that Her Story could, in my opinion, never get right: it feels human and it feels real and it feels authentic, in that it correctly simulates and creates the appropriate emotions not only for the era, but the situation. At no point does the game give you artificial anything – the dialog is boring and trite, because it’s two depressed adults working a very boring job in the 80s. The weird situation, the disappointing ending, the fact that Henry is told to return to his wife, and a plethora of other things make the game… Human… which is astounding.

I never felt more satisfied that I played a game that represented humanity in its truest… ever!?

That, the game succeeded at in spades. There was no doubt in my mind that these were authentically two people, having a real conversation, and their story was told basically like a novel. Sort of like a visual novel, with just a small smidge more interactivity and the lack of describing scenery.

Yet, pulling it back to the fact it’s a game, it fails at the role of entertaining. Walking around endlessly doing chores that may or may not move the story forward, as you’re glad handed the puzzles throughout the game, isn’t exciting. The walkie talkie conversations that get interrupted are, yeah, that would probably happen, but often times you want to hear more of what people have to say. The animations are meh, but sometimes the game is pretty. Sometimes it’s not.

Part of me says Firewatch is perfect as it is – a game where you can be human, feel human, and discover human things, another part of me says no, that’s not fair. It’s a bad game, and as a game it could do so much more. Evidence gathering, finding clues, better puzzles, more research, a longer game, more depth, etc. As a visual novel, I would find it to be really successful, but as a game, not so much.

Was it fun for me?

Was it worth the money?

Could it have been better?

For my simple review I’ll simply say this:

If you love Gone Home, buy it now. It’s a similar experience, and you may even say its better.

If you hated Gone Home because of the short gameplay or the gameplay itself, yeah, probably watch a good bit on YouTube fore your commit.

Otherwise, half off sale puts this right at the best pricepoint.

To read the latest guides, news, and features you can visit our Firewatch Game Page.