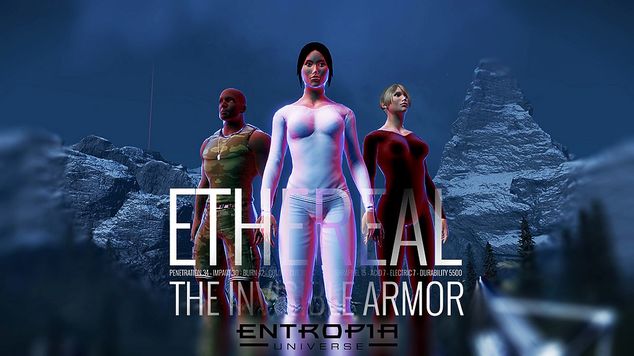 Oh my goodness, you wouldn't believe what's happening. I hope you're as excited as I am, as Entropia Universe, a game that shouldn't exist within any time or space that is known to man, but does anyway, is selling a set of armor for $5k. This setup is interesting, because Entropia Universe is one of the biggest "weird" games out there that gets almost no attention and no one ever talks about it. There isn't a lot to talk about, as the game's content is similar to Second Life, except that Second Life and EU have two very big distinctions. The first is that SL uses the Linden, which has its own currency exchange, and EU's ingame currency the PED is a 1:10 (USD:PED) transfer system, so $1 gets you $10 PED. The second being that Second Life is a sandbox simulator, whereas EU is at its very core a game.

The thing is that Entropia Universe is basically a weird version of the virtual reality that exists in Ready Player One, where a variety of planets exist within a virtual sphere. The "game" exists as a primative shooter, in which you can go out and hunt mobs throughout the world, but the real systems in place are about buying and trading various assets with the in-game currency. You can buy right now the $5,000 armor that they're offering, and then I assume be able to resell it at a later point, much like the various property in the game that has been bought and sold in droves, making headlines about someone making tons of profit (millions as they say) selling virtual real estate.

The comparisons to Second Life are historically notable, because EU, SL, and a third called There (which is in some weird way reborn) all focused on real life money in exchange for online goods. In EU, the real life money was used to buy items other players had farmed, made, or owned, or through an in-game store. SL money was exchanged for 100% player created objects without any restrictions, if it existed, you could buy it. In There, money went towards items that were a curation of both in-house stuff (hoverboards, etc.) or community items, but all content was moderated. This created some big distinctions between the two (There closed down, and has reopened as more of a fan project).

First, Second Life took the main stage, as with freedom (from scripting, to creation, to even important 3d objects), comes drama, in the form of trolling and displays of naughty bits when people least expected it, whereas There quietly rode off into the sunset, and EU sat on the back burner, making a few announcements about people cashing out hard in the game, and then existing in what we all are to assume some void of the Internet where people really desire using real life cash for WoW gold, assumed to be played by people with a lot of real life cash sitting around or people chasing a dream of cashing out, even though one can assume it'd take years of working in the game to get to that point.

Anyway, to bring this all back, you can buy a set of armor in the game for $5,000 USD. Being the person that I am, I feel like there is something wrong with this. There isn't anything that seems reasonable or normal to me. I tried to see if the stats were legendary, but that information isn't easy to come by, so I assume it's the skin itself. I imagine these are done as investments, that someone would like to own it in the future, considering 25 go for $5k, and then 1 special edition is being auctioned off starting at $5k (I can't figure out how to tell what the auction is at right now).

I have no clue how that makes sense or how EU is still relevant, or who would be interested in such an item. I can't find proof anyone has purchased one, but if I do I'm sure they're either going to hide it in some secret underground vault next to their beanie babies or immediatly launch it into the wide world of eBay. I have avoided making comparisons to Star Citizen, because I mean, at the end of the day you kind of know for sure what you're getting for your $5k, and would need to make this purchase as a grown adult - which who knows, maybe it is a good idea. I just don't see it.

To read the latest guides, news, and features you can visit our Entropia Universe Game Page.