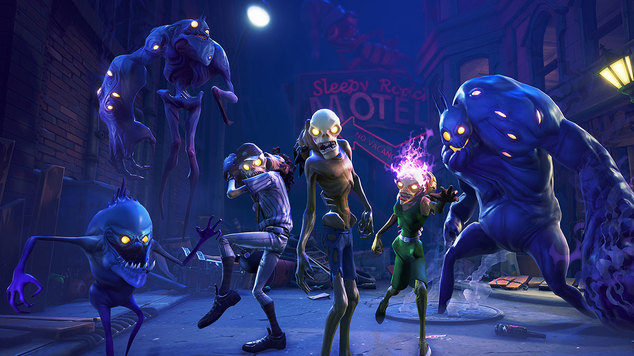 Fortnite vs. Landmark - The Battle of the Builders
Fortnite hits alpha and we take a look at which of these games you should be excited about most.

Oh boy, what everyone loves, games that have you build things. First, I'm HYPER excited about Fortnite, because it's pretty much like game of the year already to me, but ya know, when I finally get to play it I'll probably hate it. These are the two things that Landmark and Fortnite have in common. There is something they don't have in common - a purpose. At least yet.

Let me explain a bit how Fortnite works. You build a fort using your run of the mill builder tools and enemies spawn and try to come kill you. As such, your fort acts as a defense against their attacks, and the entire point of the game is to build something to defend yourself against the oncoming waves of "husks." This is essentially by the same studio that brought up Warframe and you know Unreal Tournament and the Unreal Engine, so you know it's going to be good. For Landmark, right now, you login and farm resources in order to farm more resources in order to farm more resources to return to your plot of land and build something pretty, then much like a fine plate of microgreens and parsnip puree, you take a picture and slap that up on the Internet, maybe add some filters, and go look at me I'm a master builder.

That's not to take away from some player's creativeness, but the problem with games like Landmark in their current form is that they lack purpose, the same also can be said of Trove as well, but something like Fortnite can get you excited because even if you suck at building, it dumbs all the tools down for you and just simply says "build forts." You build the fort and then fight in it, each game you can build a new fort type and work through on how to build the best forts with your friends. Then it offers so many options, explore, build more forts, build small forts, big forts, whatever. It's a fort building game and the monsters and the building interact with each other. In Landmark, as it is, you sort of either build the world's prettiest most awesome thing ever to instagram or fiddle around with what is essentially a visson for a better Minecraft without the potential to mod and run your own servers.

Landmark needs the ability I believe to either find itself and give itself purpose. SOE has, on many occasions, said they're dedicated to making it pretty much, to sum it all up, kick ass. Which is great and my full faith is behind SOE to do so. However, as it is right now, I'm super excited about Fortnite and my Landmark client remains silent, my creative itch being scratched by freaking Roller Coaster Tycoon, Euro Truck Simulator, and Kerbal Space Program depending on my attention span in a day. Landmark is great, don't get me wrong, but Fortnite - that sounds like a game.

I don't know what's up with the dudes at Unreal. Why can't they piss me off? Seriously, Digital Extremes which is the other half of Unreal Tournament (the game) can't piss me off. Unreal can't piss me off. I don't know, then again they are the power behind so many games out there, it's hard to understand why they wouldn't make good games (Bulletstorm was great). Anyway I'm off topic.

I feel that Landmark needs to find itself. It needs a real vision for what it's going to be when it grows up. Sadly for Landmark, that vision is for Everquest Next, a much beefier and more awesome game thatn Fortnite would ever be (not that Fortnite is aiming to be that). That's when the building and the virtual world combine. Until then, it limps along as a bad comparison to Minecraft and other virtual builders, while Fortnite will I think for sure surpass Landmark's fame and Trove will remain delegated to the odd corner of the Internet that an 8bit super cool fun random virtual Minecraft clone would sit.

At the end of the day I'd say the difference is they're similar and if you want what I believe to be the best building game online right now go try Second Life, if you want it to be fantasy themed, give Landmark a go. If you want some battle and purpose added to the mix, I think Fortnite is the way to go. That's just the way I see it, though.

Are you excited about Fortnite? Let me know in the comments... below!