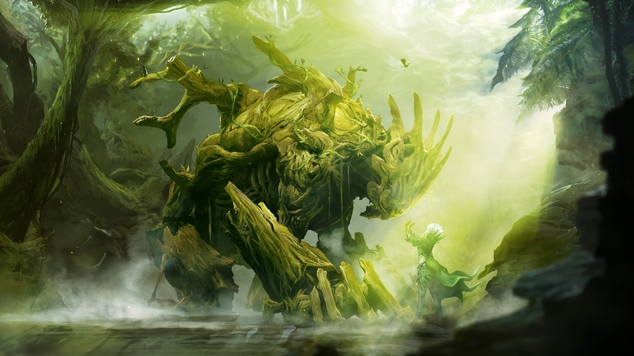 It’s fun to speculate and like most Guild Wars 2 players, I’ve spent a great deal of time lately thinking about what niches the existing professions and their Specializations could fulfil. So far we only know about the Druid which leaves 8 other professions (including the Revenant). its probably been difficult for ArenaNet to come up with 9 Specializations because most of the classes and roles already bleed into one another but despite that, I do think there’s a few that instantly spring to mind: Thief (Marksman), Necromancer (Reaper), Mesmer (Chronomancer) and Engineer (Tinkerer). As for Warrior and Guardian, I’m really not sure at this point. As a Ranger player, there’s only one Specialization I’m interested in at the moment and that’s the Druid.

At the moment, Ranger’s arguably rely on their pets only a small amount and frustratingly they have no control over their skill use. You can predict some skills (such as when you swap a new pet in, you know it’ll do a specific attack) but for the most part, pets largely act as a glorified damage over time skill due to the poor animation speed and pathing. They have some utility, help a little in Player versus Enemy encounters but are negligible and often a liability in all PvE boss encounters. In addition, the pet based Shouts (4 of them) are almost all terrible. Lastly, outside of Spirit use the Ranger provides very little in the way of group utility, especially in comparison to likes of a staff Elementalist. That leaves Rangers in a weird position because their damage is very high (certainly as Longbow and Greatsword) but it isn’t as high as a Mesmer or Thief and if they pursue such a power build, they lack a whole host of uses that those classes bring.

Where Conditions are concerned, Rangers are actually incredibly powerful but they’re also slow and again, have almost no utility in comparison to an Engineer. Where a Condition Ranger can comfortably burn players down very quickly, surviving anything more than a 1 on 1 is incredibly challenging (especially if you aren’t using a Sword - which is a power based weapon) and escaping is near impossible. In contrast, an Engineer has so many methods of survival (Tool Kit, Elixir S, Slick Shoes, Shield) that the Ranger really isn’t comparable. They need mobility.

With all that in mind, I suspect the Druid will not only fulfil a group based role through its staff skills, but they’ll have much greater emphasis on utilising their pet and providing area condition damage from range. Skills such as Entangle and Muddy Terrain are the sort of existing skills that a typical Druid might use and I believe we’ll see an evolution of those. If anything, I also suspect that some of the Druid skills will be the opposite of a Rangers traps, such as Poison Spores and Healing Seeds that cloud an area and attach onto players (ally or foe).

Outside of Signet of Stone, that all Rangers rely on, I’d like to see a greater ability to mitigate damage outside of dodging and some evasion. Protection is difficult for a Ranger to obtain, so a skill such as Barkskin, that acts similarly to Arcane Shield, would be welcome. Where the Pets are concerned, I’d also hope that there’s a greater synergy between the skills you use on your weapons and the impact it has on your pet. At the moment only a couple of skills cause an effect on your pet: I’d like to see that change with the Druid. My preference would be that every staff skill you use would provide a specific buff to you, your pet and your allies.

Similarly to an Engineer’s turrets, I’d like to see pets have some sort of aura that provides a boost to allies, with pets having specific aura’s based on their species. For example, Birds could provide power and precision while bears could provide toughness and vitality. It would also be welcome to see Druids having the ability to customise their pets skills and if possible, have shouts be replaced or significantly improved. At the moment, the ability to command your pet to do anything outside of attacking rarely happens because shout skills are so poor: I don’t feel I’m ever commanding my pet to do my bidding, it’s sort of tagging along.

Most importantly, the Druid has to somehow make the pet matter. At the moment, the pet swapping mechanic feels like a plaster for the fact they die so quickly and even the huge health pools they now have still leaves them as cannon fodder. What I’d prefer more than anything is to see the pet swapping removed on Druid and have it so the the pet can be reliably cared for during battle.

What Specilization are you looking forward to? Does the Druid appeal to you or do you play another class? Let me know!