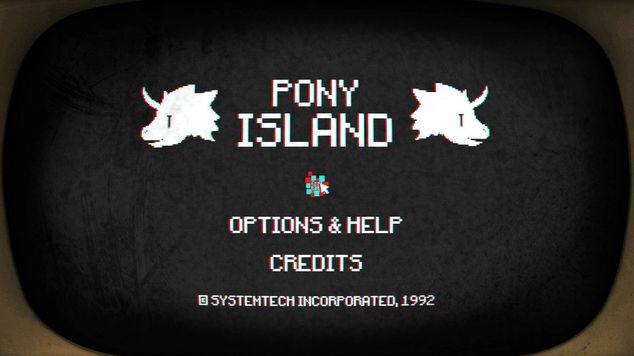 I rarely, if ever talk about bad games because I choose simply to never play them. I'm big on researching every purchase I make, from what coupons are available, to if a product is going to be worth my money, and I will often avoid purchasing anything that doesn't fit into my spectrum of "what's good for me." Pony Island, however, performed a massive troll on my wallet, by effectively stealing five dollars, and then laughing at me the entire time as it was literally nothing as advertised. The glowing reviews of Pony Island must come from the fact that people, so upset that it's literally nothing like it was advertised as, that they would join in on this epic troll and try to make a convincing argument as to why you should buy this game.

For once I'm almost ready to just outright spoil a game, but there is almost nothing to spoil. Everything that the game is, is in the trailer. You're someone, at an arcade machine, playing to escape. That's it, but unlike the really good Tron or some of the better episodes of Are You Afraid of the Dark?, there isn't anything more than a side scroller with no depth or skill required, a puzzle game that doesn't even touch many flash style code based puzzle games, and then some menu navigation that literally tells you where to click. The ticket collection system probably has the most depth, but you're more than likely to stumple upon most of them if you want to engage with the game that much.

The game is advertised as something that can out think you, but sitting down and beating it in one sitting rarely ever having to repeat a level, much less the puzzle maps which literally give you instructions on what to do, and where to go. The game doesn't offer any creative challenges to anyone who has ever played the first episode of a Phoenix Wright game, much less the vast majority of games out there. It doesn't out think you, unless it already knowing the answer and providing giant clues on how to get it is it knowing more than you, which okay is fair but doesn't really engage me.

Undertale is a game that out thinks you. Undertale is a game that takes your emotions and toys with them in this beautiful dance of characters who have depth and a world that I feel is probably the most rearl game world I've ever seen. Pony Island is like the flash games on Kongregate or Newgrounds, like Time Cfuk, but not as good? Actually, Time Cfuk is a classic, developed by the same mind behind Binding of Isaac and Super Meat Boy. So really, comparing it to those is a waste.

I don't want to be mean to the developer, I think the game is well programmed, and they're over in the steam forums being helpful, which is neat! I don't think it's a badly developed game, but I think it's a game with far too much hype, and that just isn't good. It could be okay, it was bad to me, but I imagine if you never played Misadventure or Time Kfuc then the idea would be novel. However, it's not a 91 as PC Gamer gave it, which basically says that what is a flash game that's nowhere near as creative as Eversion, which could very well trick you into thinking it's something that it's not, which Pony Island is so not subtle about.

Again - I think the developer did a good job with the game, it's not priced unfairly, but it's not creative, new, or interesting. I could personally easily miss it and go on with life not ever really regreting not playing it. It didn't out think me, it told me a simple story, that you couldn't really ever fail at. I wouldn't say don't buy it, but I wouldn't have wanted to buy it, much less would I have wanted to play it for as long as I ended up, seeing if there was something remarkable, and that didn't come until the very end.

If you want a game that can out think you, look deeper in the genre. This creepypasta isn't it.

To read the latest guides, news, and features you can visit our Pony Island Game Page.