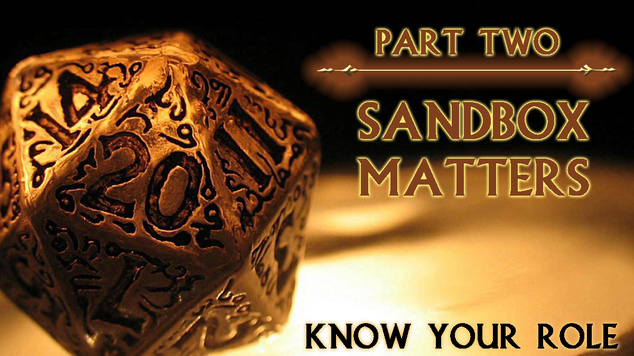 Know Your Role - Part 2: Sandbox Matters
Alex elaborates on the debate between sandbox and themepark and illustrates how those meta-schemes impact the i

[Prior to diving into this latest edition of a growing series of articles, you should check out the backstory behind this mini-series with the intial concept primer and its first installment that you can find links to below.]

Know Your Role: The Primer
Part One: Respecting the Past

Before I really dive into the nuances to how a player's role effects their entire MMORPG experience, I think it's important to establish a greater context to the different games I'll be breaking down during this run of articles. There are lots of small and specific roles that games ask players to play - but a larger and more important role is usually defined very early on; as developers design games around a specific flow of meta gameplay.

You may hear the terms "sandbox" and "themepark" thrown around flippantly these days; and I tend to believe that people say them and use them often without putting some serious thought and analysis into the games they're labeling. Even more alarming is how one game descriptor will lead a commentator or player to make other assumptions about a game - and usually, one they have never played.

I was having a hard time deciding on whether I wanted to examine Ultima Online or EverQuest first in this series, as both titles are two of the oldest and most memorable games in the genre. However, once I thought about the whole themepark vs. sandbox argument, the choice was much easier. The scope and intended playstyle of a game at large is hugely important and has to be at the top of my list when it comes to examining and understanding the roles undertaken by the players participating.

When it comes to the original EverQuest there is an interesting plot twist involved, especially if you've only played the game recently (or perhaps not at all).

You see, when it comes to EQ, I think most everyone would agree that EverQuest is the oldest themepark MMORPG currently still breathing - including me. Some would probably even contest that EverQuest laid the foundational framework for almost every massively multiplayer themepark online game today, including World of Warcraft. And to both of those points I wouldn't disagree. Interestingly enough though, EverQuest actually didn't begin as a themepark-styled game.

It was all the additional expansions and the continued development of that title that turned it into the true linear themepark MMO we know it as today.

Before all that, EverQuest was a sandbox. Even with all its power creep, vertical-progression and level-based accumulation of influence the game was far more sandbox than many games today that proclaim themselves as one. You didn't really log in to vanilla EverQuest with the expectation of being on a set of rails and getting hand-guided through content (even though the game today very much embodies that type of approach).

Why EverQuest Was a Sandbox

Right out of the character creation gate, players make their first sandbox choice in selecting their starting race and class. In most games today, that may seem trivial and the total opposite to sandbox-styled gameplay, but back then it did change everything. Not only would you be starting in a completely different location, but this wasn't a temporary thing. Leveling in EverQuest took a long time and a lot of effort - which meant that unless you were willing to make a long and arduous trip across a very massive-feeling world - you would be stuck there for a while. Even if you did make the dangerous journey of traveling elsewhere to level with friends you typically had to make a lot of sacrifices to the efficiency of the process. Faction and language were huge barriers to friendly market prices and finding your way around a new location.

Additionally, even the leveling process itself was very un-guided and free. There were plenty of areas around the world to find creatures and quests in your level range (with quests being a rare addition to your experience increase and not the staple it is today). Not only that, but aside from the newbie areas directly outside of NPC cities, there were plenty of high-level roaming mobs populating lower and mid-range zones. Nowhere was truly safe, and there were multiple opportunities to (and reasons for) higher level characters to be present and active in each and every zone in the game.

When it came to the classes themselves, the melee classes had such simple utilities that they were generally useful in just about every circumstance and environment. Casters were equally valuable and the wide range of spells and abilities allowed players to diversify themselves and custom-tailor their abilities for each adventure and encounter. That was even before Aleterante Advancement points were introduced, which to me is still probably the most sandbox-like element of end-game progression I have seen an MMO ever introduce.

Compared to the more sandbox-oriented game of Ultima Online, EverQuest probably felt like the more linear and guided experience of its day. That's probably the reason that the most themepark-styled linear MMORPGs today drew more from EQ mechanics than they did from UO mechanics; but that still doesn't justify the concept that EverQuest, the grandfather of themepark MMOs, was a themepark-style game itself.

After all the expansions and streamlining and other features and content added over the years, it certainly has become one; but I am firmly entrenched in the belief that it didn't begin that way. I definitely never felt like it was a guided experience when I first played it over fifteen years ago, and it pains me to see others that view it as an ancient themepark that is in need of serious renovation.

To me personally, I feel more as though the original product I fell in love with as been drowned beneath the waves of change as so many more linear and guided elements have shifted everything about that game into a much more directed experience that retains few (if any) of its original sandbox elements. The combination of all the mechanics created a real freedom of choice within that game, that sadly doesn't really exist today. Not there, and not anywhere really.

The EverQuest of old as faded away, and the sandbox pioneering it was doing when it first released has been almost entirely forgotten. 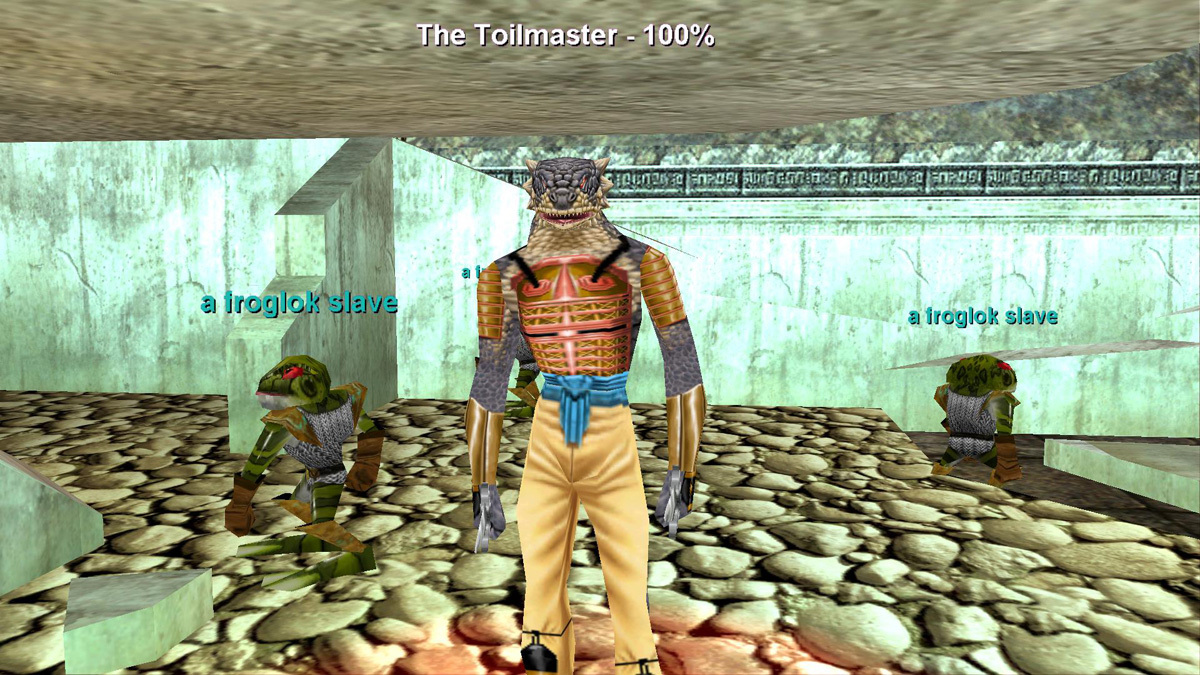 I recently installed Project 1999 at the behest of my brothers (whom used to play the original EQ with me back on the first rendition of the Rallos Zek PvP server); needless to say we're running around as a pack of deadly Iksar in the project's Red server and are eager to wreak havoc anew. While the graphics are severely dated, I actually don't believe the gameplay is. Lacking many of the modern-day features and amenities, classic EverQuest still feels very similar to the sandbox version that I remember from way back when.

It's thrown me for a bit of a loop honestly. I don't have an in-game map. I don't have a compass. I've got to actually pay attention to my surroundings and make smart choices. The environment around me is dangerous and filled with perils and there is no "safe" place to gather experience. Dungeon crawling is particularly dangerous as the aggro ranges, respawn rates, and line-of-sight in tight quarters always leads to something unexpected.

More relevantly though is that the game really forces you to consider your actions, and the role you play in any given situation is magnified by the consequences of failure. Which, of course, makes the rewards of success all the more sweet. It's not the kind of love-hate torture that I would recommend for everyone, but for anyone that believe the original EverQuest was more themepark than sandbox I wish I could force you to play it for a few days.

If you did, you'd realize how free and open-ended that game truly was.

The reality is, back then in those particular circumstances, most players were far to immersed in their immediate surroundings and hierarchy of needs to be bothered with following a designed linear trail of progression. There was so much more that mattered back then than simply leveling up and gearing-out. Your friends mattered and strangers did too. The world was so dangerous and unpredictable that having a good reputation among your peers was both important and rewarding. You never knew when you might need someone's help, and you never knew when you would be called to action by the distress of someone else.

It was a dynamic experience that was less about players trying to find things to do and more about content emerging for players to participate in. The sum of all the game mechanics created that kind of environment and everyone had a role to play. Sure, there was a much more limited array of options back then, but at least there were options and no individual path felt more efficient than another. You simply played the game the way you wanted to and enjoyed it for what it was.

There wasn't really a massive competition for achievements, bragging, and all that other nonsense. People just played the game to enjoy being immersed in a strange new massive world with tons of people from around the globe joining them in the same place. Most importantly, the game required players to actually need each other - and that made a huge impact on kindness, courtesy (and even villainy).

It's totally different now, but back then - it was something special, and everyone who participated in it felt special too no matter what role they ended up playing in.

[Thanks for reading, and if you enjoyed this column be sure to check out my author page here on TenTonHammer and follow me on Twitter for live-notifications the moment I publish new content. And please, please consider supporting my writing here by contributing to our Patreon page. Its those contributions that help us keep this site independent and as ad-free as possible! Also, don't forget to comment below with your own thoughts, opinions, and experiences - as my own are purely singular and by no means a consensus on the topic being presented.]