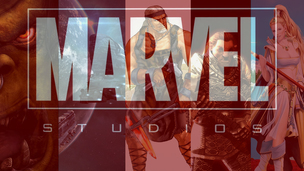 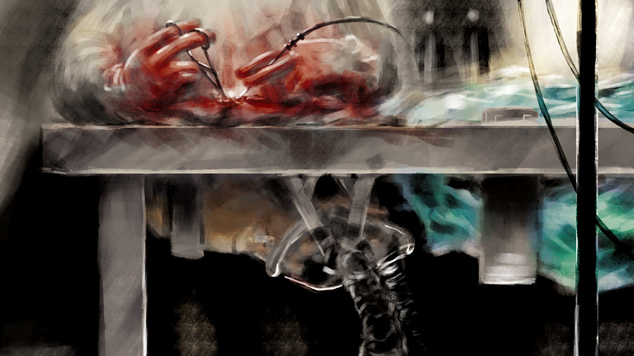 "MMORPG"s Are Dead, Here's The Autopsy
Alex believes that what we consider an "MMORPG" today no longer holds any redeemable value - at least not when

The one thing that drives me absolutely mad about today's writhing mass of "MMORPG"s calling themselves role-playing games... is the complete and utter lack of contextual, quality storytelling. You might think you've heard this rant before - but no, the scalpel goes deeper this time.

Instead of just making incisions in the latest revulsion, I'm going to turn on a more positive surgical light and dissect an upcoming online multiplayer game that isn't simply changing the way things are done but turning it totally on its head and stomping down with brutal, crushing force. First though, I do have to expose the heart of the matter.

A Recipe For Failure

You see, today's "MMORPG"s rarely deviate from the following recipe:

2) Player's character quickly finds themselves immersed in a compelling story where all feedback suggests that the fate of the entire multiplayer world rests on their personal actions, and those actions only. (For those of even moderate intelligence, the illusion is probably already shattered right here. Occasionally better writers provide the perspective that they are one of many "heroes", likely hoping to hold up the veil for just a while longer.)

3) Player's character ascends through a steep vertical climb of power gains until they arrive at "late game" where everything the game has been telling them about what they can do "comes true" a.k.a - turns out to be a lie - and nearly every scrap of storytelling they've experienced thus far suddenly rings completely hollow.

Because the reality is, your character doesn't really have any impact on these worlds. You really aren't the hero, and much worse, you aren't even one of many collective heroes - whom together can actually influence the world in any meaningful way. The whole thing is a sham, but you've invested so much time and effort already, you might as well enjoy all the new kinds of content that were previously gated by a long and arduous grind.

When it comes to storytelling, that's absolute filth.

It's Not You, It's My Level of Self-Awareness

I'm not knocking any MMORPG writers out there (whom I am personally acquainted with several - who I know to be talented and creative individuals). It's not that the story isn't of fine quality, full of interesting characters, or laced with enough intriguing plot twists and details. The problem is that none of the premise is true. Everything these stories are trying to sell us (or maybe they aren't even trying anymore these days) doesn't ultimately ring true. It's just the flavor of the grind, and nothing any NPC ever informs you about your character's ability to impact the world is really possible.

It's the worst magic show in the world; and sadly, the majority of people are eating it up. To those who are awakened to this sad reality, this gruel gets almost unbearable to eat. For me, I've had my fill and I just can't stand it anymore. When I play an MMORPG, it's purely to examine other mechanics and elements of the gameplay (combat, crafting, social systems, etc).

I don't play to experience a story. Not anymore. They just don't exist. They're all hollow, and usually not even worth reading anymore. Again, no knock on the people writing quest text (it's usually quite awesome actually!) - but the fact that I know it's all a ruse makes it disgusting to consume.

Turning It Upside Down

As I mentioned earlier, there is a game that's taking this recipe, wrenching it upside down, and drop-kicking it into oblivion. This game's plan for story should shock any MMORPG player's senses back into reality and out of the dull and poorly machinated dream worlds we've been living in for over a decade (most of us consciously aware of the tragedies around us).

Instead of attempting to paint your future character as its hero (or heroine), instead it's going to make you just another nobody... and through that, actually make you somebody that matters. Not following me? Then let the dissection commence!

A New Recipe For Immersion

Rather than feed you the same old hollow lines and meaningless drivel you've been choking down for years, it's time to feast on a new recipe of meaningful story that will finally inform you of how you can actually change and impact the massive multiplayer world around you.

1) Your character gets thrust into another new world, full of the same seemingly limitless possibilities and potential.

2) Now though, you're given an open-world to explore and interact with. A world where each decision and action you make will literally tag you with influence that will change the way every NPC (and even other players) interact with you. Occasionally, it might even attract eyes with plans on a much wider scale.

3) Finally, your character will progress through your own personal track of growth and development while your accumulated tags push and pull the world around you - sometimes even with real-time game masters using your character as a catalyst for dramatic change. Your presence might become a blessing and the salvation of the people you encounter (NPCs and other players alike), or perhaps you will end up a fateful harbinger of doom, a curse to those you encounter - often greeted with hostility. Adored or abhorred... you will matter, your presence will be noticed, and it won't be artificially fed to you in unison with all the rest of the happy-little-sheep.

The game whose recipe I have described above is Revival: 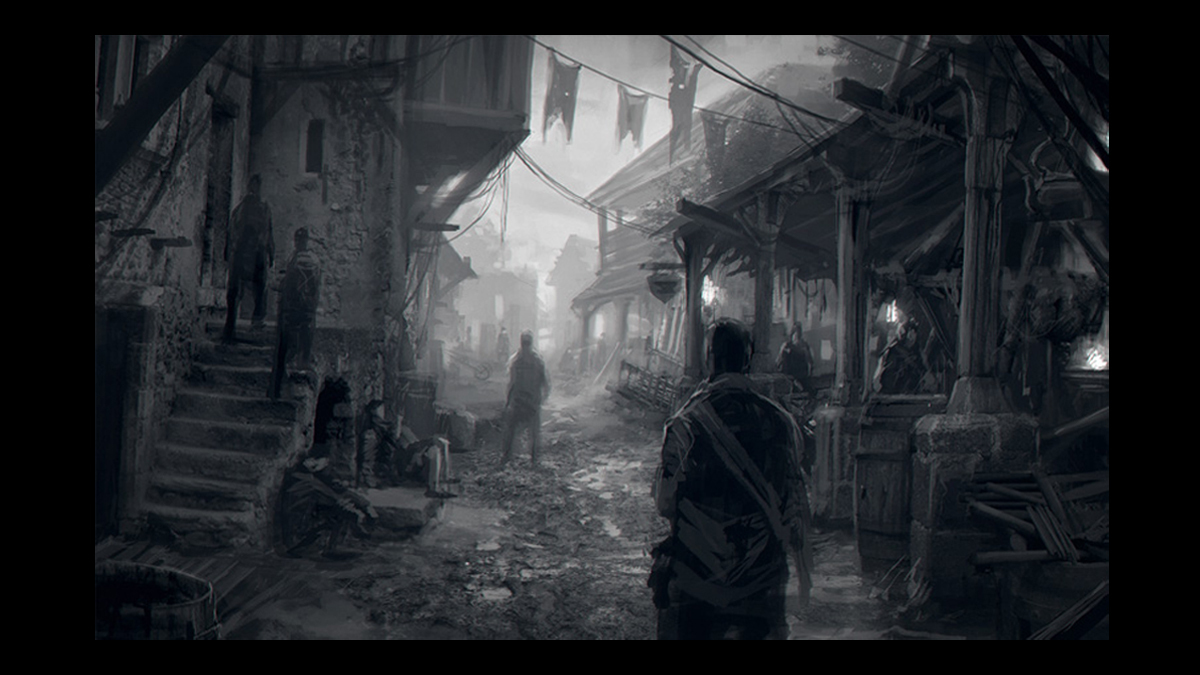 Welcome to the Real World, Neo

The decisions that you make, the places that you go, and the people whom you choose to interact with will literally "paint" your character with invisible tags of information. Tags that grant (or potentially restrict) access to certain information and alter the way the game-world perceives you. Taking that a step further, how that game-world perceives you will then affect how other players treat you, determining who you become in the world of Revival.

You, and those with whom you affiliate yourself will define what you become - not some cliché story that an underpaid and undervalued writer was forced to modify several times to fit the traditional model of "MMORPG"s.

You will make the choices.

You will be in control; and you will be able  to alter, influence, and impact the future of that digital realm.

I know that sounds good, but before you get too excited...

The world will also be guided by real-time game-masters; live-storytellers that are watching the world, watching the NPCs, and watching you - just waiting to flip a couple of switches and spin the world (and its compelling story) into a brand new direction.

These "agents" of the system will not always be on your side. Like Neo in the Matrix, you will be traversing this epic alter-reality, and these agents can appear anywhere, take control of any NPC, and even bend the rules of the system to accomplish their greater goals.

But What Does It All Mean?

If you're anything like me, it's both exciting and unsettling - being enveloped in such an unpredictable experience. Yet somehow, there is a wonder about it. There is a deep curious desire that compels me to dive in and find out who I can become, what I can accomplish, and what hopes or doom I bring upon the lands. In the end will I become a hero? A villain? Perhaps neither? Maybe I just find my niche somewhere between a greater moral battle and thrive in the obscurity of the grey with friends and enemies on either side.

I find it extremely difficult to imagine a massively multiplayer role-playing experience that doesn't offer this potential as a staple element of gameplay. The intrigue of diplomacy, the magnetic influence of player-personalities pushing each other around in an immersive real-time experience. And somehow, all pawns and pieces of a much grander game being played at a level perhaps beyond our control...

Or perhaps it isn't.

That is what truly piques my interest, by far. Will the world of Revival finally provide the social fantasy gaming experience I've unknowingly been craving since the my first few days roaming the original Norrath of EverQuest? Will everything I do (good or bad) finally matter, even slightly, as I and those around me spin the web of a much more incredible tale... a story much bigger than ourselves?

I believe it is.

I believe that the technology has existed for some time now, but the courage to pursue a different algorithm of human interaction was never tested.

For years, developers have been doing it all wrong.

Players don't come to "MMORPG"s simply to be the hero. Not at all. They can get that from just about any single-player RPG.

Players come to MMORPGs to experience a grand adventure side-by-side with others - be they strangers or friends. It isn't merely about who we become, but who we become in the context of the world and what we mean to the other players around us.

They aren't about a story that matters, and they aren't about your interaction with other people - so how can they be multiplayer or role-playing in any sense of either term? Who knows, maybe they are - maybe the term MMORPG is fully devoid of value. Maybe that's why Revival is calling itself an Multiplayer Evolving Online World?

Are you ready for something dramatically different?

Are you ready for your characters to actually grow and change and the world to truly evolve around you?

Are you ready for an MMORPG Revival?

I'm actually worried it won't arrive quickly enough. A game with these intentions and this magnitude of player agency is long overdue in this genre, for this audience specifically. We've deserved an MMORPG that is actually multiplayer and actually tells a story we're a real part of. After all, we're paying them to build it, right? Anything without those elements is not satisifactory. Anything less is just a shadow of what it should be.

Anything less is a cruel joke.

(Special shout-out to TheMuteRobot for the cover art for this article. Too perfect. Go check out their DeviantArt page for more wickedly awesome goodness!)