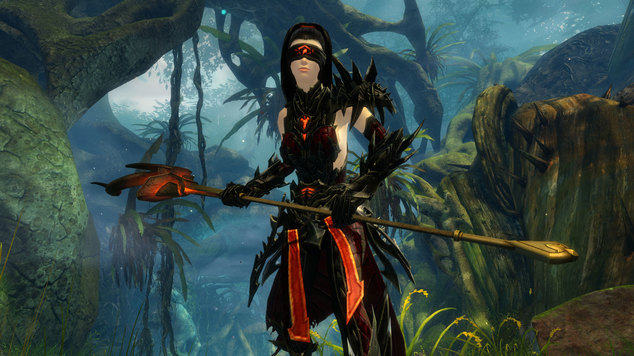 Persistent Worlds: How Can We Improve The Revenant?
In this daily outlet, Lewis chooses one topic for discussion from Guild Wars 2. Today's: The Revenant hasn't be

Over the weekend Guild Wars 2 players who had purchased Heart Of Thorns were able to test the revenant, including the new Ventari Legend. Alongside his new weapon (staff) everything was open for testing: dungeons, fractals, world bosses. Thanks to some pretty incredible technology, ArenaNet have managed to allow mirror player accounts in order to Beta test the Revenant, on the live server, without it impacting on your actual possessions. In my case, I could make a revenant, equip him with full ascended heavy items from my guardian and if I deleted him, I'd still have the items (but could play with all my friends on Gandara). Crazy.

Anyway, my reaction to the revenant on a live environment has been pretty mixed. I still love the animations, concept and styling but it's incredibly lacklustre right now and I think it hinges on a few key things.

1. Its damage is woefully low to the point where I think it would rank as the lowest out of all the professions. Even fully ascended with berserker items I really couldn't squeeze any viable amount of damage out of the profession. It hits like a wet noodle - across all its weapon sets and Legends. Admitedly its still missing its highest damage Legend (Shiro) but that's only going to go so far. Inevitably, Legends don't stop the profession and its weapon sets hitting for so little, unless of course the revenant wielding a sword or dagger miraculously boosts its damage by 200%.

2. The fact that the Revenant has no weapon swap is incredibly limiting to the point where it could, potentially, cripple it entirely. Having additional skills when you swap legends is fine, but it doesn't make up for the fact the profession is so rigid in its play style. Unlike the Elementalist that has both melee and ranged weapon options, you never feel as though you're limited in your options thanks to four attunements (and thus 16 weapon set skills, excluding utility skills). Even if you pursue a Dagger/Dagger build, you can quickly reach opponents through a variety of skills. The Revenant seems to lack this flexibility and as such, you feel incredibly pigeon holed in your role. If I were to take the Ventari and Staff, I'm able to do little else but support where as an Elementalist taking staff is capable of huge amounts of support and damage. Even something as simple as chasing someone down is impossible with most weapon sets because you've so little scope to adapt your playstyle.

3. I've tried and tried to squeeze something good out of the revenant trait lines and I just can't. None of them are particularly exciting and none of them feel powerful or valuable. Unlike the other professions that (for the most part) have a strong set of Master traits that cause the player a difficult decision, I honestly feel no sense that I'm challenged in what to pick when it comes to the revenant. At least two of the three from each line are poor and even then, the third is so-so.

As to how we can improve the revenant? It's pretty simple. Buff its weapon damage (across all weapon sets) as well as implement a weapon swap. If neccesary, increase the weapon swap cooldown to make up for the fact the skillbar when utilising a Legend can change. More than anything, I think at this point people also need to know exactly what niche the revenant is trying to fill. It isn't quite a warrior or guardian and isn't up to the standard of either. Its traits appear highly defensive and yet I can't help but fear that a guardian will always do a better job.

What are your thoughts on the revenant and if you have concerns, how would you improve it?