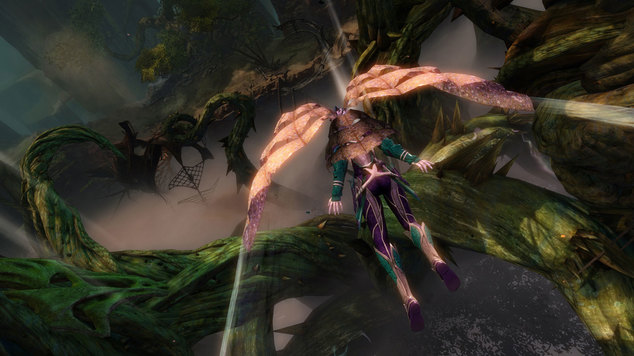 I was talking to a friend over the weekend about Guild Wars 2 and we got onto the discussion of how there was once a planned app for the game that would feed players information such as who from your guild was online, what they were up to as well as providing a variety of other information. It was an awesome idea but one seemingly shelved by ArenaNet. Baring that in mind, here’s my list of Guild Wars 2 ideas that were lost, abandoned or put on the back burner during development.

Elite skills were once mooted as being an ace up the sleeve of players. They were supposed to offer a huge amount of damage, utility or a mixture of both in order to turn the tide of a battle. Combat between players was also going to be heavily based on the use of elite skills in the sense that it would be a psychological battle to see who used their elite first and whether or not this would be an advantage or disadvantage over the course of a fight. Sadly this never came to fruition and most of the elite skills in Guild Wars 2 are lacklustre or unused. Some certainly fill a certain niche (Plague Form being one example) but with the exception of Rampage, I never look at an opposing player and think “Holy shit, they’ve used their elite!”. Would it really be so bad to have a skill that was truly powerful?

There was a time where many players were hoping that choosing their race would make a difference to not only their personal story but also open up the possibility of additional skills that were unique and potent. Although racial skills weren’t technically “abandoned” and are very much in the game, they were neutered based on a variety of factors. Predominantly it was a perceived need for “fairness” across all races reasons being the primary reason. As it currently stands, I don’t have a single friend or guild mate who uses a racial skill. I think that’s a real shame as racial skills had huge potential to allow for a much more personal skill bar.

Originally designed as a tool to support your play while you were away, The Extended Experience was supposed to be a mobile app that allowed you to chat to your guild mates, view the world map and see what your friends were up to while you weren’t online. Although it sounds a bit stalker-ish, I think the app had potential, especially if ArenaNet somehow allowed players using the app to interact with the world in some way. I’ve never found an answer as to why it was abandoned, but I suppose it boils down to resources, the fact they release their API for players to use and whether or not they wanted to cost and continued expense.

Dauntless - How to Create A Guild & Add Players

When Guild Wars 2 first launched (or not long after), it was the first MMO I had ever played MMO’s where content was delivered quicker than I could complete it. At times, it was actually exhausting trying to keep up with what ArenaNet were offering. Where quality was concerned, some of what was delivered was suspect, but for the most part it certainly kept players entertained. The shift to a more protected development of content in support of the Living World has undoubtedly improved what players are presented with, but the time it takes to complete new content combined with the gap in delivery time doesn’t quite seem to scratch the same itch. I’ve never really had a direct answer from ArenaNet as to why they changed approach but I can only assume it wasn’t financially viable.

Back when Guild Wars 2 was in early development I wrote an article over on Tap-Repeatedly that spoke about the poor lip syncing. From that, Bobby Stein got in touch to discuss what was coming and sure enough, ArenaNet delivered amazing lip syncing technology that worked wonderfully in the cutscenes. Unfortunately this is rarely if ever used any longer and instead, we have cutscenes shot only in game (as opposed to this). For speed the in-game cutscenes are undoubtedly quicker to recreate, it’s just such a shame to see this technology go to waste as it was so much more engrossing.

[Edit] ArenaNet's Bobby Stein informs me Lip Syncing is present during Living World cutscenes but is difficult to see unless the camera pans very close to characters.

Perhaps it was 99% marketing, but Dynamic Events were supposed to offer an ever changing series of challenges for players to participate in. The impact of them would cause a ripple effect across a zone so that players were encouraged to participate in them. One particular example that was often wheeled out was how Centaurs could attack a town, take it over and it would be down to players to rescue and protect those affected. The reality, more often than not, was a very small chain of events that was strictly scripted and largely ignorable. A far cry from the below:

In the Guild Wars 2 dynamic event system, an event will kick off in the world and players will see things in their environment – like smoke from a burning caravan - and hear NPCs shouting about what is happening. You’ll never have to read a big chunk of quest text to find out what’s going on; you’ll actively see and hear about it. Based on what happens in that event, the world will change and the event will chain out into other events that cascade across the map, creating a truly dynamic and ever-changing world.

Even with recent Dynamic Events, their reach and effect on the world is limited although they have improved somewhat.