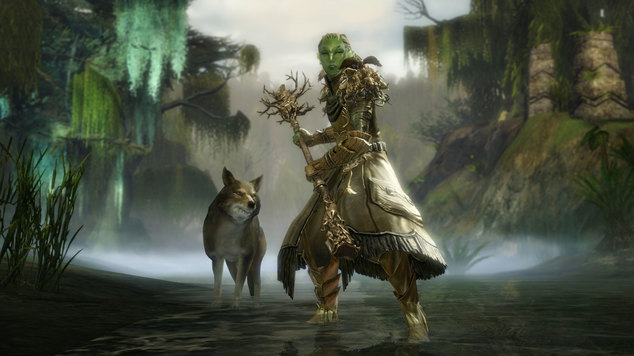 Persistent Worlds: Thoughts On Dungeon Reward Changes
Over the last few days I've been thinking about the dungeon reward changes ArenaNet are making. Here are my tho

In a blog post made earlier this week on the official Guild Wars 2 website, John Smith, ArenaNet’s economist, detailed a variety of changes that players can come to expect when its first expansion pack, Heart of Thorns, arrives. For the most part the blog post detailed little that players weren’t already expecting however, one paragraph titled Dungeon Rewards has caused quite a stir in the community. The entry, stated the following:

Over the last couple of years, dungeons have been a major part of the game’s economy; between unique armor and liquid rewards, they’re often farmed. In the expansion, we’ll move away from this paradigm. As the game progressed, we shifted focus from dungeons to fractals and raids, and we firmly believe that fractals and raids are the content that we want to continue to support. As a part of that process, we’ll shift some rewards away from dungeons and into other pieces of content. While dungeons will remain cool experiences that’ll reward players with unique items, their liquid rewards will be reduced and other content will become more rewarding. The shift in rewards is a direct representation of our focus on raids and fractals and our commitment to make them the best they can be.

The major concern that we’re sure to face is the specific intent of dungeons as a gold-generating activity.

There’s a heavy dollop of PR coating in this paragraph and I can understand why ArenaNet chose to word it as they did. What they’re effectively saying, in not so many words, is that they no longer wish to support dungeons as a means of allowing players to farm money. As a result of that, gold gain will be shifted directly from dungeons to Fractals and raids. We don’t yet know as to what degree this will be, but it’s highly unlikely that players will earn the same as they do now. In fact, there’s every chance that in terms of time versus wealth gain, it’ll no longer be worthwhile.

I can fully understand why this has frustrated some of the playerbase but I also think it’s important that we provide ArenaNet with the benefit of the doubt. As it currently stands, many dungeon paths are unbalanced to the point where some take minutes and others significantly longer.

Having dungeons farmable in this way, across many thousands of players, no doubt generates a great deal of gold . The Silverwastes, combined with the multitude of continuous events in Verdant Brink is already looking like a farming paradise. If you added that to dungeon dailies, as well as a raid run, there’s every potential that players could soon be swimming in gold (or so ArenaNet fear).

To digress for just a moment, in all the years I’ve played MMOs Guild Wars 2 is undoubtedly one of the most difficult games to earn gold in. Many of the systems ArenaNet have in place either directly limit gold earning potential or ensure that there’s little or no money to be made in the first place. Crafting is barely profitable, you cannot reliably farm one item or ingredient from a specific creature like other games in the genre (trolls, for example, don’t reliably drop X material) and world boss rewards are largely very small. Even harvesting nodes offers only small amounts of income, requiring you to farm huge volumes to make any sizable income. When a Legendary weapon costs thousands of gold, it’s not entirely surprising to see people resorting to any means they can to earn money. At present, that’s the following:

You might consider that this gives a variety of ways to earn gold but the vast majority are entirely luck based rather, than allowing players to reliably obtain it through their own efforts. I remember fondly making eye watering amounts of money in World of Warcraft by spending my time flying around zones harvesting planets, to then turn into potions and sell on the auction house for considerable profit. Unfortunately, play of this nature simply isn’t possible in Guild Wars 2. Combined with the Gem store, ArenaNet need to ensure that the vast majority of players don’t obtain too much gold otherwise it totally undermines their ability to monetize the game. Even minor changes such as throttling Black Lion Key gain or reducing the number of Transmutation Charges you obtain in structured PvP all go towards gently pushing players onto the store.

Back to my original point as to why ArenaNet are really reducing dungeon rewards, I think it’s fairly simple. They have to keep gold gain at a steady level (whatever that may be internally) but they’re also likely to balance out the dungeon loss of income through Map Rewards.

Map rewards are specific, tangible rewards you receive from playing on a map. They allow players to balance overpriced items as well as seek specific materials for their personal goals without constant uncertainty. Map rewards are pretty great but are a constant enemy of scarcity. Map-reward materials can no longer be overpriced for any extended period of time because players now have the power to push the supply when needed. This shifts the power from the supplier of a rare good to the buyer, because the buyer now has the option to refrain from buying and still achieve goals, which is what we wanted.

With this including Tier 6 materials and Legendary weapons now consistency of new materials, there’s every chance that players will not only earn more than they do now, but have a greater ability to acquire resources that were once incredibly expensive. The one catch in all of this is that by adding new Legendary materials, it could all be replacing one problem for another.

Either way, I'm looking forward to seeing how all this plays out because if players find they are in fact losing a significant amount of money, despite new content, there could be riots...