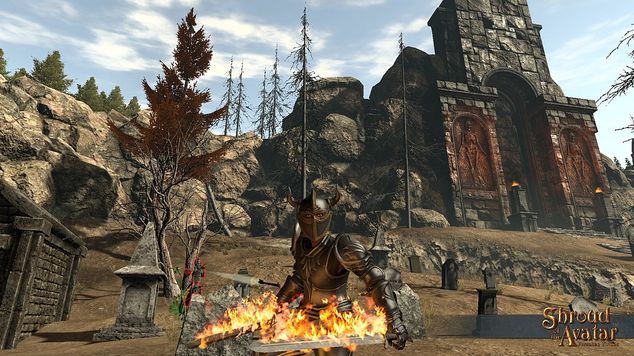 Shroud of the Avatar is the Way to Build a "True" MMO
Richard Garriott may not be the best game developer in the world, but his SotA is one of the best examples of m

This originally was going to be a news post about the recent Update the Avatar, but I honestly just wanted to take a step back and talk a bit about how Richard Garriot has done crowdfunding and even MMO development right. One of the interesting aspects of Shroud of the Avatar is that Richard Garriott opened the servers up when the game wasn't even really a game and has kept players involved in the entire development from start to finish.

To break down how a game works, it went on Kickstarter on March 8th, 2013. It was funded quickly and the pre-alpha server was turned on in December of 2013. Since then, the game has run live for the entire time and at every stage of the development player's feedback has been obtained. Richard Garriott goes so far as to hang out in the game, with Starr Long and a legion of other devs working on the game to solicit feedback and talk with players to see how they're enjoying the development of the game so far. The game is made for those who support it, instead of being made for an audience they hope will support it.

The interesting thing about SotA is that it isn't made for the mass market, it's made for fans of a specific genre of MMO that over time, have grown to be a very small percentage of the MMO community. Back when fast Internet wasn't easily accessible and you had to live within x number of miles from some technological wizard that would deliver speeds up to 50kb/s to your house; there wasn't much interest in the genre or a big audience for it. Technology was limited making it hard to create an MMO that was easily accessible and people were forced to conform to mechanics that would otherwise be considered heresy in the modern world. We can all agree that the difficulty of legacy MMOs wasn't just the grind, it was dealing with the UI, the buggy systems, the constant need for GMs to fix the game, etc.

Now, MMOs can have FPS combat, they can have action combat, and the entire system can be ran in anyway possible. Much like older cars though, players still remember the "good 'ol days" of legacy MMOs and crave the experience, even if you had to sit on a coca-cola crate and shift with a wrench, it was "good." It's hard to build a game for a group with very refined taste and specific desires that might not make good mechanical sense, but makes great gameplay sense - especially for the way they like it.

Another issue with MMOs is that they become giant platforms built out without any feedback by the people who are going to pay and play it. They're launched and it has two chances to be good, assuming it takes a subscription. It's either good at launch and maintains a crowd or it's good when it goes free-to-play after essentially the same process that SotA has gone through - vetting by the community.

WildStar is a great allegory or example of this idea, because WildStar launched and fans in general weren't upset that the game wasn't good, it just wasn't complete and as such, left a lot of players wanting. It'll get a second life when it launches free-to-play where, after I think about a year of continued development and a lot of player response, it'll get a second life as the game the community wants, not the game the community doesn't need.

At the end of the day, to build a good MMO you need a lot of feedback and you need more than a couple of tasters in the kitchen with the cooks to provide feedback. The interesting and almost (I think, but I can't quote the idea here) unique idea to slowly build the MMO alongside players is intelligent and the proper way to get work done. In the same respect, hopefully future early access MMOs like Star Citizen PU and Crowfall will iterate on the process with their users and pay attention to the charming way SotA has played out.

Anyway, if you want to read about SotA's update, it's here - I'm sure if you're a fan this was probably the first thing you checked today and once again big kudos to Richard Garriott for making a game for his audience in a style that works really well.