Loading... October 7th, 2010 - Dark Horses
We still have a few months to go before the end of the year when gaming sites traditionally begin rolling out t
Column
DUST 514 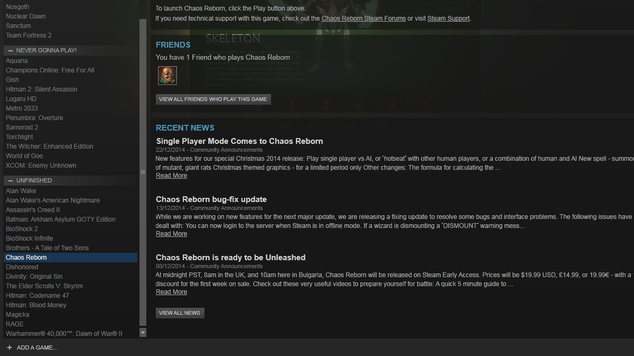 The Curse Of The Steam Library
Steam libraries can be daunting. For 2015 Lewis Burnell has decided to clear his.

Unlike many people my Steam catalogue of games is probably pretty small. I’ve around 60 in total and due to my addiction to massively multiplayer titles have only completed a fraction of them. In fact and having categorised my Steam list, I’ve only finished 8 of those games. The rest I’ve broken down into various sub headings:

It’s a simple enough system that has seen my Unfinished and Never Gonna Play! list grow massively. Even games such as Bioshock: Infinite, Metro, Torchlight II and the Witcher series have been thrown into my Never Gonna Play! pile. It’s not because they aren’t good games (critically, anyway) but instead because in some way or another they annoyed me a great deal. If we take Bioshock: Infinite as a perfect example and as a huge lover of Bioshock, I was well and truly looking forward to this game. Within the first hour of play however, I’d stopped playing. Seeing NPC’s all look identical alongside the constant habit of openly stealing or looting from irrelevant locations just became a frustration. Even at the very start I stole from a Hot Dog vendor while she stared directly at me. You might think these two things are minor and in the grand scheme of things they are. Sadly they frustrated me to the point where I just couldn’t proceed. When I’m playing a game that’s attempting to immerse me, being faced with such obvious flaws puts me off immediately. If hundreds of millions of dollars are being spent on a videogame and they can’t even be bothered to add a reaction to NPC’s when you steal something under their nose or different faces to the NPC’s around, I can’t be bothered to continue playing it.

Due to the fact I’m easily annoyed at such small things in videogames I find that I’m quick to throw them away without truly delving deep into what they offer. It’s difficult for me to look past such glaring flaws when playing a AAA games: I’m much more forgiving on indie titles. Having said all that and with 2015 right around the corner, I’m going to tackle my Steam library head on.

Regardless of whether I dislike Bioshock: Infinite or the dozens of other games soiling my Steam account, I’ve chosen to play through every single game to completion the moment the 1st January 2015 arrives. Having recently picked up a couple of extra games thanks to the Steam Sale (Alan Wake, Divinity: Original Sin and Brothers - A Tale of Two Sons) now is as gooder time as any to work my way down the list. I fully expect that through many of the games I own to be played with gritted teeth while others (Penumbra) will likely be with brown pants.

Some of the games on my list I checked this morning and it turns out I’m pretty far into the likes of Dishonored, The Witcher and Metro. I suspect part of the reason why I abandoned games that I’d put significant amount of time into is because of MMO’s. It’s fair to say that MMO’s aren’t perfect, their dialogue and narrative is often terrible and for fear of being contradictory offer little in the way of immersion. What they do offer me however cannot be replaced in a single player environment. I love social interaction while playing games, I love competitiveness and I love the feeling of progression. This never really seems to come about in offline games and even the likes of Torchlight or Diablo III never seem to quite scratch my itch. It’ll certainly take some dedication to blast down my games list but I also think it’ll be worth doing. There’s a lot of money tied up in these 60 games and all of them, critically, are well received. Often being the odd one out, I suspect out of those 60 I’ll dislike a great deal of them - I never seem to share the same views as my peers. I'll let you know how I get on.

Have you got a Steam list that’s too daunting to clear? How do you deal with your Steam catalogue? Let me know!

To read the latest guides, news, and features you can visit our DUST 514 Game Page.

Loading... October 7th, 2010 - Dark Horses
We still have a few months to go before the end of the year when gaming sites traditionally begin rolling out t
Column
DUST 514