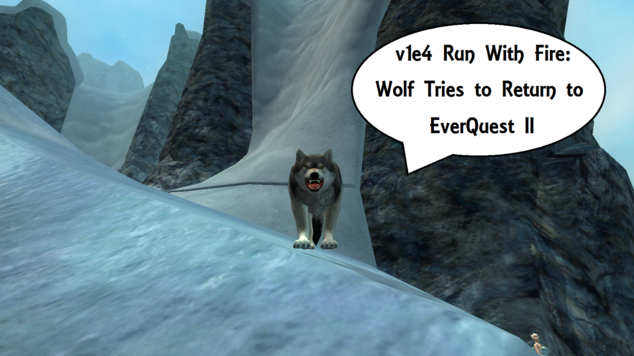 Wolf Tries to Return to EQII
In Volume 1, Episode 4, Wolf takes a trip down that nostalgic memory lane in a return trip to EverQuest II, whi

In Volume 1, Episode 4, Wolf takes a trip down that nostalgic memory lane in a return trip to EverQuest II, which is kind of akin to repeatedly ramming a brick wall. Wait, what? EverQuest II has become my double-edged sword; that game that I love to hate and hate to love. I was seriously excited about the new expansion and hopping back into the game. I'm a little bit behind on the level curve, with three level 90s. I started getting back into EverQuest II earlier in the year, and really wanted to get back into the game right around the time that I was boarding that SOE Live hype train at full force. At that time, I was having a hard time sticking with a game, so I was exploring revisiting games that I knew I loved already. I had some fun in EQII, and I started toying with the idea of getting the current expansion to level some more, but I knew a new expansion would be announced at SOE Live and out before the end of the year. Besides, I was enjoying my revisit to Velious - my favorite expansion in the original EverQuest.

I didn't have much in the way of expectations for Velious, but that nostalgia bug of both experiencing two games I had loved, both at the same time, was a pretty great feeling. I didn't have a mount, let alone a flying mount, so exploring The Great Divide once again on foot was rather breathtaking. Like my Bard in EverQuest, my Warden in EverQuest II is ridiculously fast on foot and (thanks to her Speedy Bard's Cloak) can float all over the place without worry for injury. One thing I really missed was how zippy my tiny Warden was. I shifted into melee spec, threw on my Thex Mallet and went to go have some fun. 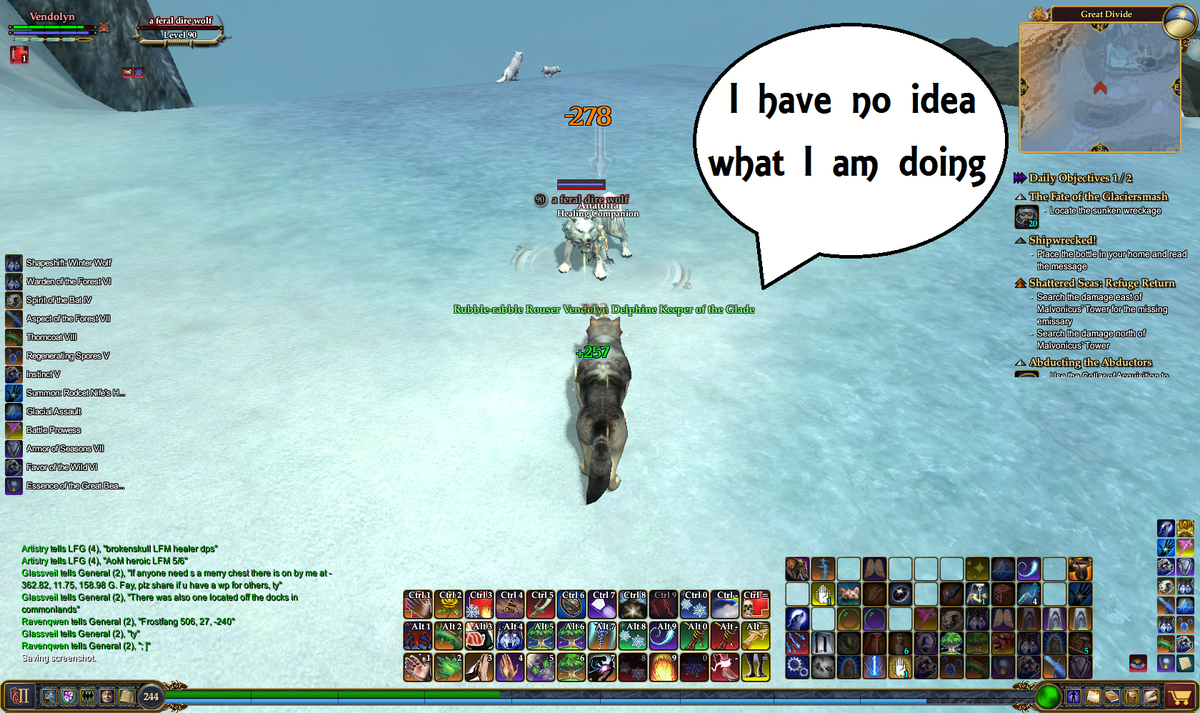 Once I entered combat, my experience completely changed. Earlier, when I was thinking about how hard it has been to get back into EQII, I was wondering if I was just used to combat in World of Warcraft and that was to blame, but then I started surveying games I've been playing or have tried lately. Combat in EverQuest II is slower paced than World of Warcraft - like it or not, since these two games released within two weeks of each other, they will always be worthy comparisons in my mind - but WoW is now more of a "medium" level setting, and newer games only get twitchier from there. I think the most painful thing for me, though, is how long it takes me to kill something. I remember when I initially went with the melee spec for my Warden, how much fun it was steamrolling through content, couple that with completing the Thex Mallet Heritage Quest, and the fun only increased. Fighting things in Great Divide, however, is just boring. 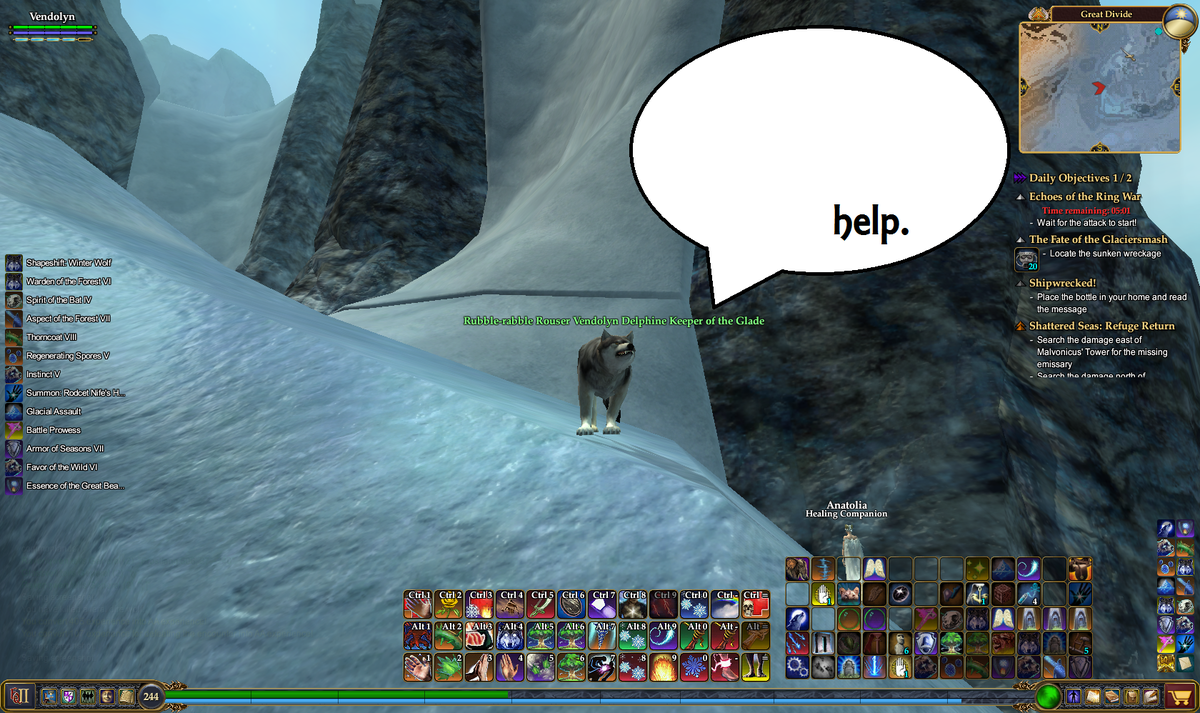 Getting into the combat doesn't even include the struggle it is dealing with the giant pile of abilities thrown at you. Coming back to the game after taking time off makes this task ridiculously overwhelming, and it's a task you need to overcome if you want to get back to leveling. The problem games face when they reach their decade milestone, is that if they don't adjust to the changing market, they are likely to frustrate a casual off/on playerbase, which is what I would say I belong in for games like EverQuest II (and even EverQuest, although I load it up less these days). Having multiple tiers of every spell is daunting, and that doesn't even begin to address how many abilities you have to relearn when you haven't regularly played your level 90 character in quite some time. I love how adaptable the EverQuest II UI is out of the box, but taking the time to redo that initial setup is a lesson in patience, but I know it's worth it, once you get there. However, what I'm left with is about ten different hotkey banks, all of which are almost completely full, all filled with different things I need on hand at all times.

Now that I've set up my UI again (thankfully, the game remembered what abilities went where already), gained access to new abilities and upgraded abilities (the new ones I forget to use sometimes and the old ones...well, I think I have the proper tier slotted in my hotkey banks), and I've gone through remembering how to use my character, so now what? As much as I was enjoying The Great Divide, there is that new super shiny expansion (WITH DINOSAURS) just waiting for me. I went out there a few times in beta to look around and I couldn't find any quests. I thought that was because I used the NPC guy to auto-level me to 100, so I wouldn't know who to talk to without talking to everyone. I pretty much just ran around and looked for shinies for the duration of my beta access. 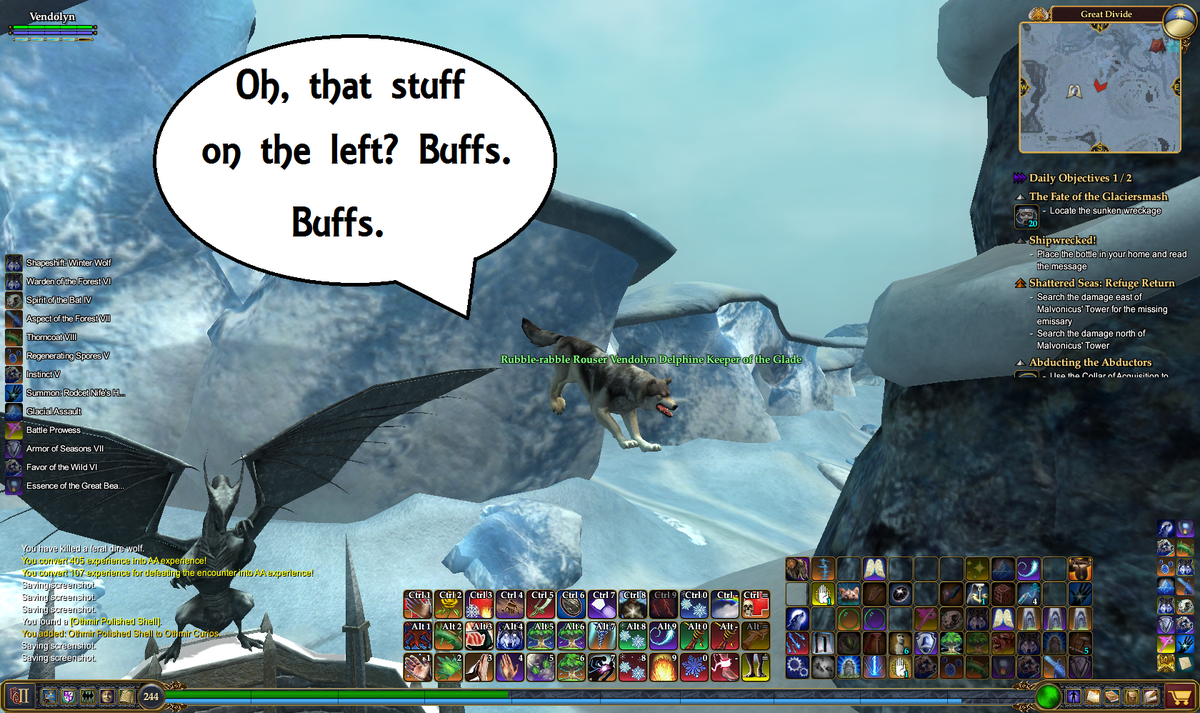 Recently, however, I thought I'd go back out. I figured out how to get there in the production environment, which wasn't as easy as it was in beta, but still pretty easy. I kind of forgot that I'm under the level I should be to go out there, so I had a bunch of orange-con mobs staring me down (EverQuest II has a level between yellow and red, which would suggest that I could get lucky and take them down, but it would be pretty damn difficult to do solo). With a deep sigh, I ported back over to The Great Divide and decided to work on that leveling up thing, which I couldn't do before my account was flagged for Altar of Malice, the latest expansion. Before I could start working on earning that sweet ass XP again, I had to readjust my Alternative Advancement bar. When you hit max level, which I previously was, your AA bar automatically sets itself to 100%, so all of your earned XP now goes towards AAs. AAs are a pretty smart system; once you get to max level, you can still progress your character beyond the gear treadmill. Honestly, I wish more games would put in AAs, although maybe not quite like the original system in the first EverQuest. 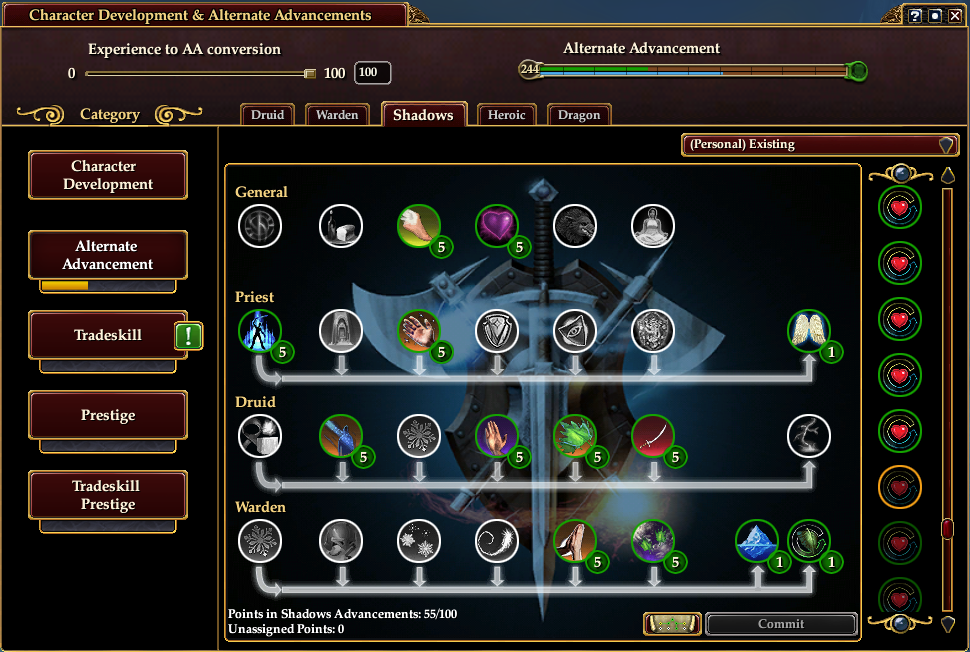 I found myself unable to move my bar. I did all sorts of things, like log out and back in. Do some googling. Try to set my search to within the past year, because I didn't want to read up about someone from 2008 who couldn't change their AA slider bar. Frustrated and not finding what I needed, I started to wonder if my character was broken. Did I have the new expansion? I pulled up my /claim window, which is where I can select any entitlements I have on my account, such as yearly Veteran Rewards, items from Legends of Norrath loot cards, and anything else my I can get for my characters. Out of ideas, I pulled up the petition window to see if my character was broken or not. I hate petitioning or dealing with support, even when I know I'll have a good experience, like SOE has proven to me time and time again since they decided to bring CS back stateside. What I found out made me feel pretty dumb for not knowing, and pretty frustrated that it's there in the first place. The whole reason I can't advance in levels is because I need more AAs first. So, try as I might, I can't go do that whole have fun in the new expansion yet. 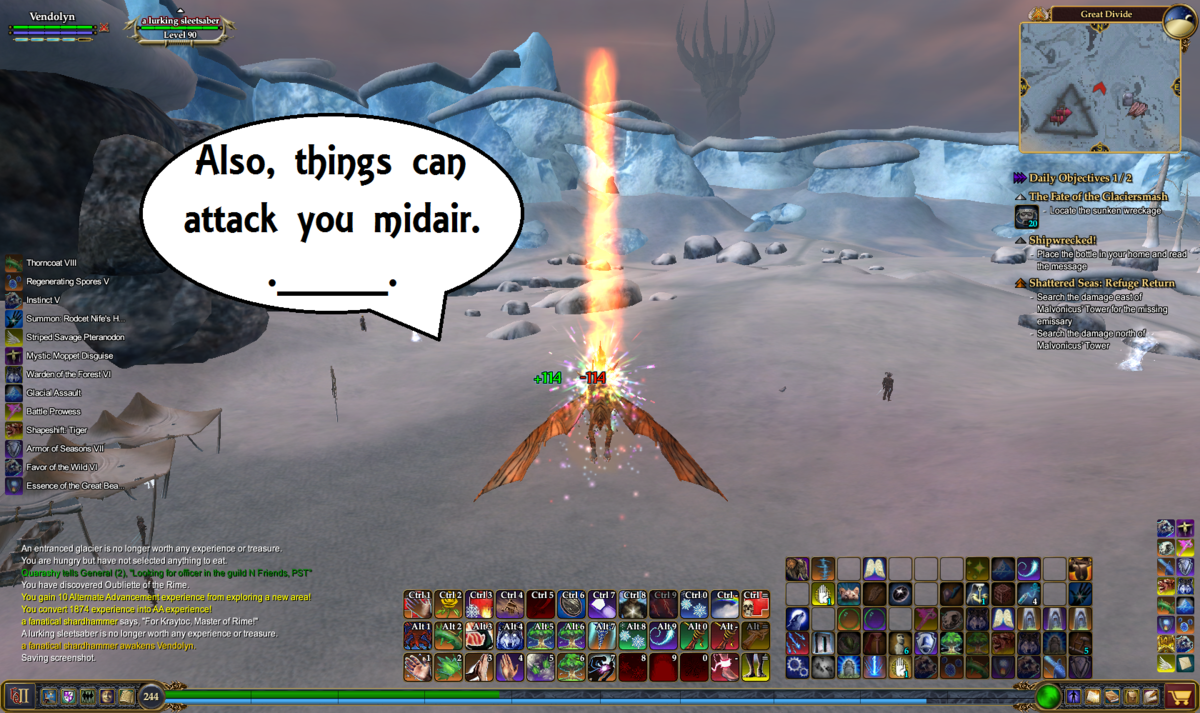 Here I am, a frustrated wolf trying to hop back into a game that I've been playing off and on since alpha. I'm almost to my goal of 250 AAs, so I can start leveling again. It's just that the issue that I need to reach an AA threshhold (which I do understand why it's there in the long run), coupled with the way combat feels and how cluttered the sheer number of abilities are, it's been a difficult journey that makes me feel like I'm repeatedly ramming my head into a wall. That's not fun. I don't want games to feel like work. That's not to say I don't like my games difficult – I do, and I love challenges. I'm just caught up in all of these frustrated bits that leave me waffling too long over whether or not I should keep logging in. I know I'll eventually get the hang of everything, I'll get better gear that will make combat fun again, combat fun again will lead to things not taking so long to die, and I'll get to the new max level. What I'm wondering, what I think my real point here is, why hasn't EverQuest II received overhauls and updates to keep it feeling more modern? I hate to keep comparing this game to that other game that came out two weeks later, but Blizzard has managed to keep World of Warcraft relevant. The learning curve for some fights has been difficult, but not to the point where you want to rage quit life. Spell tiers were removed long ago, and with the Warlords of Draenor pre-patch, abilities were retooled, which resulted in some removed (RIP Renew for Disc Priests). There's a reason why that game continues to be the monolith that it is. While I certainly am sick to death/bored to tears/other cliches of WoW-clones, I do think some games could stand to borrow from it, just like it has borrowed from other games. I want to love you again, EverQuest II, but damn if you're not making this hard on me.