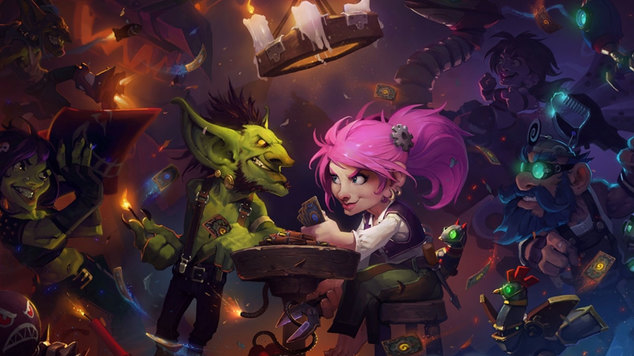 Deck of the Week 22 - GvG Tempo Druid Deck
A guide to a traditionally strong deck type for moving up the Hearthstone ladder, the Tempo Druid deck. This g

This week I look at a very strong and reliable Druid deck that is based on the deck I looked at back in the Deck of the Week #16.  Back then it was for the Curse of Naxxramas meta game, and while the game has changed since then, the deck still works with just a few key card changes and some slight tactical changes.

As a testament of how strong the deck type has remained and how steady it is, from Naxx to Goblins vs Gnomes, roughly 2/3rds of the deck remain unchanged!  In addition, this deck type is still one of the favourite deck types used to reach legendary rank since it is so strong (or at least capable and resilient) against everything out there.

Tempo or Ramp decks aim to hit your opponent early and often and keep up the pressure.  This is true of this deck as well, however Druids have the advantage of being able to put out bigger than average minions earlier than most other classes. Typical of Druid decks it can keep a constant stream of big minions with taunt on the board to deal with everything your opponent can through at you.

Almost every card in this deck is a key card as there are no weak minions. However some of the cards that are more important than others in the deck.

Innervate and Wild Growth – Two great cards in almost any Druid deck.  They offer up the ability to get more mana earlier in a game than any other class in the game.  This really helps you start out strong.

Sludge Belcher – A really good defensive minion that has becoming a standard card in many decks. He usually offers strong defence for at least two turns or more.

The Black Knight and Sylvanas Windrunner – Two late game cards that provide options on dealing with your opponent’s late game cards.  They either destroy them allowing you a way through taunts, or steal minions on death, neither of which is a bad thing!

Cenarius – An extremely powerful minion that boosts all of your already in-play minions.  Because of this he teams up well with many of your other minions, especially those with taunt.

Foe Reaper 4000 – This card is severely underrated by most players and shouldn’t be.  It is one of the best cards in the Goblins vs Gnomes sets that rarely sees use.  He is key to the way this deck plays in the late game, so will be discussed more in the strategy section below.

Dr. Boom – This is one of the other best cards from the Goblins vs Gnomes set and fits in extremely well in this deck.  For 7 mana you get a 7/7 minion as well as 2 1/1 minions that go boom upon death.  He is a great way to remove threats and to deal damage.

This deck has many strong opening card options especially due to your Innervate and Wild Growth cards.  Therefore they become the cards you look for in your hand and if they are there before you mulligan they can change what you are looking for.

If you do not have either Wild Growth or Innervate in your hand, then you need to mulligan everything to try and get one of them.

If you start with either card in your hand then you should be looking to get Shade of Naxxramas, Piloted Shredder, or Keeper of the Grove so that you can apply early pressure.

For specific matchups there are some other cards to look for.  If you are playing against a class that could be a rush deck then Swipe is also a great option to keep so that you can clear the board on turn 3 or 4.  If you are playing against another big minion class like Druid or Warlock that could be a handlock deck then keeping Big Game Hunter is also a strong opening hand option to prevent any early game surprises.

Your overall strategy with this deck is to weather the first few turns as best as you can, and then start putting out bigger minions to stomp your opponent into the ground.  Once you get to the mid and late game portion of a match, there are few other decks that can put out as many big minions as this one can.

To start each game you want to keep control of the board as much as you can, which can be tough since there are very few low cost cards in the deck.  The trick is to make use of your Wild Growth, Innervate, and the Coin if you are going second, to bring out your big minions sooner that most other decks can.  Against rush decks you will have to suck it up for a few turns, but then your big taunt minions and your swipe cards can turn the game back in your favour.

The mid-game is where you can start to really setup some defence and some aggression.  Here you can start to get some attacks going from your minions.  Many of your minions also offer a lot of defence as you have 4 minions with taunt to help protect you. Many of the minions that don’t have taunt have abilities that help counter attacks, such as Black Knight killing a minion with taunt, Syvannas stealing a minion upon death, the piloted Shredder spawning another minion, and many others.

Once you are into the late game, you have a few ways to win the game.  There are the traditional ways that this deck has won in the past, meaning the Savage Roar and Force of Nature combo, or just by persistence and beating the opponent down over time.  However, sometimes the opponent gets a few big taunt minions out, or a minion that you want to kill but just can’t do so easily, that is were the Foe Reaper 4000 comes in.

He is severely underrated by most players, and I don’t get why.  His strength is that he is able to hit up to 3 different minions all at once while only taking damage from one of them. He can deal with many different minions that you would not normally be able to without trading off a minion.  For example you can hit a minion with taunt that is beside another minion that you would rather kill, and still kill them both.  If there are several minions out to attack, but one of them would severally hurt you, attack the minion beside it instead, potentially taking only a single point of damage instead.  At 6/9 he can take out most minions with a single hit, and with a Savage Roar played he could potentially hit and kill 3 giants in 1 attack!  Although realistically, 2 giants are far more realistic.

Loatheb – This card has become a staple in many decks since it offers a good 5/5 minion as well as shutting down your opponents spells for a turn.  I do go back and forth on this card in the deck, and it can be usefull once you are at rank 5 or higher where you encounter more control decks, however while climbing the ladder I skip it.  If you want him in, replace either Cenarius or the Foe Reaper 4000.

Faceless Manipulator – I really like this card in this deck, but can just never find another card that I am happy giving up for it.  The idea of having a second Foe Reaper 4000 show up in a fight can be truly frightening to your opponent.

Harvest Golem – One thing this deck is missing, is a lot of early game cards.  Adding in the Harvest Golem can resolve that issue, and it still works extremely well late game thanks to Kel’Thuzad.

Sen’ji Shieldmasta – An old card, but a great fill in card if you are facing a lot of fast aggressive decks.  At 4 mana for a 3/5 minion with taunt, this minion can hold off the opponent for a while longer and starts doing so earlier than your other minions with taunt.

Azure Drake or Sunwalker – Two more original set cards, but ones that can be substituted in if you do not have some of the mid-game legendaries that form this deck.  If you are missing either Black Knight or Sylvannas, heck even Cenarius or Dr. Boom, then these can fill in until you get them.

Playing against this deck is the same as it has always been, it is all about dealing with the big taunt minions.  Silence cards and non-removal removal cards (like hex and polymorph) are strong against this deck.  Make sure you save them for the minions that you really need to remove though.

Mages are really strong against this deck, especially if they have many secrets in their deck.  The ability to either delay this decks minions or better yet copy them, is really powerful. Add in a few Faceless Manipulators and the Druid can find themselves facing off against their own minions, and they don’t have that many options for removing them.

It is imperative that you keep in mind that potentially from turn 7 on, this deck can deal 14 damage in 1 turn.  This means keeping a minion with taunt active, or a secret that will protect you up, as soon as you are nearing that health range.

This deck type continues to exist in game and continues to be a very strong deck, simply because it can deal with almost anything out there.

This version is a little less combo based than versions from the past, but still has the deck defining savage roar / force of nature combo that wins so many of its games.  The deck is still a little slow at the beginning of the game, but can put out so many different attacks in the late game that it wins despite being slow at the start.