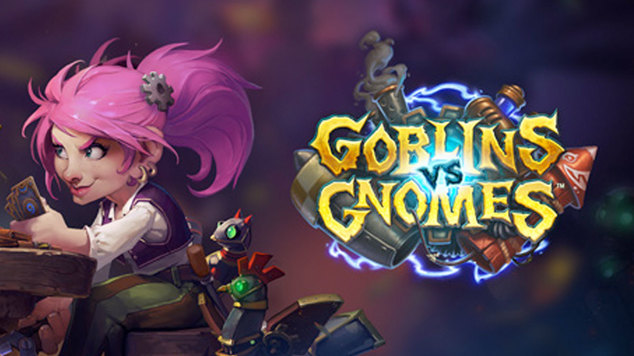 Deck of the Week 23 – Mech Mage Deck
A look at a brand new deck type, made possible by the multitude of mech cards in the Goblins vs Gnomes expansio

This week I look at a flexible Mage deck that I have seen many variations of while climbing the ladder this month.  The deck is focused on the many different mech minions that are available thanks to the Goblins vs Gnomes expansion.

The deck is a very inexpensive deck to make since so many of the cards are standard cards.  There are only 4 Rare and 3 Legendary cards in the whole deck, which makes it fairly easy to collect.  Better yet, it has no real weaknesses, being a decent deck against almost any opponent.  That makes it great for climbing the ladder as you will not be completely outclassed by any specific deck.

This deck works by combining several cards abilities together to generate more power than they normally would grant.  Here are just a few of the key cards that do this.

Mechwarper – With so many different mechs in the deck, this minion makes them all much easier to summon.  A really good opening play is to use the coin, get him on turn one, and then bring in a Tinkertown Technician turn 2 and a Piloted Shredder on turn 3.

Spare Parts, Sorcerer’s Apprentice, and Archmage Antonidas – Spare parts count as spells and are only 1 mana, which the Sorcerer’s Apprentice then makes cost 0 man.  If you can save up several spare parts, then summon the apprentice and the archmage in one turn, you can generate a huge amount of Fireball spells to blast away with over the next few turns.

Azure Drake – This 4/4 minion provides both a card and a boost to spell damage, making it great for almost any deck.  With the various spells in this deck though it becomes a really powerful minion.  It boosts Flamecannon, Frostbolt, and the numerous Fireballs that you will be casting.

Goblin Blastmage – This minion helps you keep the board clear once you arrive at the mid-game, ensuring that you can focus your direct damage on your opponent and not their minions.

Mechs, Tinkertown Technician – Any mech on the board allows you to summon the technician for 3 mana and get a 4/4 minion plus a spare part which helps in other ways.

Dr. Boom – This is one of the other best cards from the Goblins vs Gnomes set and fits in extremely well in this deck.  For 7 mana you get a 7/7 minion as well as 2 1/1 minions that go boom upon death.  He is a great way to remove threats and to deal damage.

This deck works best when it can get off to a strong start. It has several ways to get a good start so what you mulligan for depends on what you start with.  Ideally you are looking for either a Mechwarper of a Manawyrm in your first draw.

If you have neither of those cards in your first draw then you should look to keep anything cheap and re-draw the rest.  A good keep option is an Annoy-o-Tron since it offers a lot of protection in the early game.

Your overall strategy with this deck is based on starting strong early on and then keeping that strength going throughout the match.  The deck does however have enough power to be able to come back at any point that it gets behind though.

Strong starts are discussed above in the ideal opening hand section, and you can build off of those.  The mid game is where a lot of the other cards come into play. Most of the mid game cards are actually stalling cards though to keep the board clear, or attack the opponent if possible, however they really are just to delay until late game.

Once you are in the late game, this is where you can put out big pressure.  The key combo is the Spare Parts, Sorcerer’s Apprentice, and Archmage Antonidas combo.  With this you setup multiple fireball cards that can hammer your opponent into submission over the next few turns.  If your opponent has managed to get a few big minions out then that is where your Dr. Boom can come into play.

There really is no one correct way to play the deck though, as the cards present so many different options to you along the way.

Foe Reaper 4000 – This card is severely underrated by most players and shouldn’t be.  It is one of the best cards in the Goblins vs Gnomes set, and yet rarely sees use.  If you are seeing a lot of control decks then finding a way to fit him in can really help out.  The ability to hit a minion with taunt and kill both minions beside it is amazing and lets everything else that you have go through the opponents defences.  The only reason it is not in the core deck is that I have found Loatheb and Dr. Boom more useful lately, however I go back and forth on this one.

Harvest Golem – If you are missing any of the mech cards listed above, then the good old Harvest Golem is a good option for filling in any holes.  It provides you with another mech and another minion that is resilient to removal.

Mechanical Yeti – I have seen this card in several versions of this deck while playing, and it has a lot of up side to it.  For 4 mana you get a 4/5 minion that provides additional spare parts on death. The only issue is that it gives a spare part to your opponent as well, which I don’t like.  Also, I have not seen a need for another mid-game minion, but your experience may be different.

Toshley – Another great card if you happen to have it, but not one that I would go out of my way to add.  However, if you are facing several large minion decks time after time, then this legendary grants some more mid-game power as well as an additional few spare parts for the late game.

Echo of Medivh – Potentially a great card for this deck due to the number of cheap minions and the bonuses that they each have.  The only issue that I have is what to cut from the deck to add this one in.  Potentially dropping a Piloted Shredder is an options.

This deck type is fairly new as it is based off of several brand new Goblins vs Gnomes cards and their mechanics.  While the overall deck type is new, it is almost an updated zoo style deck, since it focuses on many high return on investment cards.  It happens to also have a few end game cards which many zoo decks do not, which really helps if you get behind in a game.