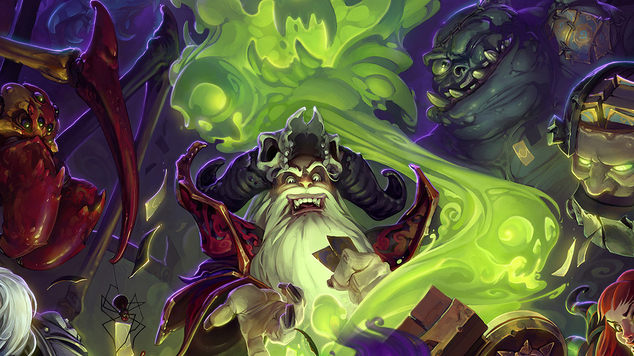 The essence of a Control deck is about controlling the pace of the game early on, until you get to a point where you can stomp on your opponent in the late game. They generally focus on mass removal and control spells that either kill of your opponents minions, slow them down, transform them, or take control of them. They also look for minions with taunt to slow the enemy from being able to damage you personally.

This guide looks at two typical Control Decks and how to play with them and against them.  Each of these decks can help you make your way to the top of the ladder if played correctly.

Mages make a very popular choice for control decks since they have so many different ways to control the flow of the game.  Contrary to many popular Mage control decks this one focuses on a lot of direct damage rather than heavy use of the freeze mechanic.  Before looking at how to play with or against the deck, let’s look at the list of cards that make it up.

This deck is all about controlling the pace of the game with cheap effective minions, and ideally those with taunt or the ability to grant taunt.  Therefore you want to get them into play as quickly as possible and keep them alive as long as you can.

Your goal is to lower the opponent’s health to 10 by turn 10 so that you can finish them off with a Pyroblast.  Your health at that point does not matter, as long as you get to that point with 1 health left, you win.

How to Play Against – Mage Control

There are several things to keep in mind when playing against this deck.

One of the most important points is to make sure you do not stack up too many minions in play at one time.  This is important so that you do not allow super effective use of Flamestrike.  Make the Mage use it against single or double minions instead of being able to use it against three or more.

Since this deck focuses on delaying enemy attacks with direct damage and taunt mechanics, try to damage the opponent as soon as possible and as often as possible.  Clearing taunt minions quickly without losing your own is key.

Stay above 10 health as long as possible, ideally until at least turn 11 or 12.  With 2 Pyroblasts in this Mage deck, the odds are that they will have one in hand on turn 10 and therefore be able to kill you off if they have lowered you to 10 health.  Do your best to be able to survive that first Pyroblast.  The deck does not have a huge number of large threats, they are all small in nature other than the Pyroblast.

This deck works by taking control and stopping direct attacks against you right from the start.  Therefore you should be looking to have at least an Arcane Missile or Mirror Image card in your hard, and ideally both.  In addition you are looking for other low cost high effect minions like: Mana Wyrm, Novice Engineer, Bloodmage Thalnos, or Harvest Golem.

Any other cards that you get you should replace in an effort to get these cards.  In addition you do not really need more than 1 of any of them so you could replace duplicates as well.  They are your solid early game cards though, so it is up to you if you would like to keep or replace.

While the above deck works very well as it stands, there are always options available that could make it suit your play-style better.

One of the cards to look at swapping in would be another heavy hitter like Ragnaros in place of the Bloodmage Thalnos.  It does shift the mana curve up a bit, but adds some heavy late game pressure.

Some players also find that swapping in a Polymorph for removing big threats helps, or adding in a few freeze cards such as Blizzard or Cone of Cold for even more mid game control.  Be cautious though as while good cards, this deck already has very few big threat cards and these can dilute the decks finishing power even more.

This is another popular list that allows you to control the board early in the game and then hit them with several big hitters later in the game.  It plays very well against a lot of the Rush style decks out there due to the various large minions that it can summon with taunt.   Before looking at how to play the deck in more detail, let’s look at the cards that make it up.

This deck has a lot of big defense style creatures most notably the minions that provide taunt and the minions with large health pools.  Your goal is to get these minions out with taunt as early as possible to stop or at least slowdown / control all of the rush decks out there.  It can usually get enough minions with taunt out to slow down the rush decks enough that they run out of steam before they can kill you off.  The first few turns tend to be not playing anything other than drawing cards with your power.  Then by turn 4 or 5 you can drop a huge minion and then give it taunt on the next turn.

To help keep the enemy minions in check you have access to several direct damage spells that will either remove minions or damage the opponent.  It can be hard to judge when to use these cards when facing a rush deck though.  Basically if you feel you can survive an opponent’s rush until after you can summon something big then hold off.  If not, then use the direct damage to kill what you can, then go back to getting cards for big minions.  Your priority though should be keeping the board clear of enemy minions so that your big hitters can stay alive dealing damage for longer.

Also to keep minions in check, any time the enemy has several minions out your can use either Hellfire or Shadowflame to kill them all off.

Once you get to the late game, this deck is all about the big minions and direct damage spells to stomp your opponent with.  Remember though with no real heal spells and using your ability a lot early, you will likely be low on health, so keep up clearing the board and keeping minions with taunt up.

How to Play Against – Warlock Control

There are several great cards and card types that can shut this deck down.  The biggest card type against this deck is silence.  There is nothing worse than finally getting a big giant or drake out and putting taunt on it, only to have the taunt removed and being slammed in the face.  While the giants will still be able to cause a lot of damage, that was never their primary roll anyway.  Silence really hurts this decks play style.

The other great cart type against this deck is anything that changes the minion, returns the minion to their hand, or outright destroys the minion.  This means cards like Hex and Polymorph, Vaporize, Frost Trap and many others.  These cards can change a huge minion down to a weak and easy to kill minion, delay them, or kill them outright, for far less energy than it cost to cast in the first place.  Even cards that lower health or attach value are solid choices against this deck.

With the above in mind, the best way to play against this deck is aggressively at the start and then cautiously later on.  Keep your control cards in hand until something really big comes out, then make them pay.

With this deck a lot of your strength comes from getting a Mountain Giant out as early as you can and then giving it taunt to control incoming attacks.  This means that you are looking for a Mountain Giant or at least an Ancient Watcher in your hand and a card to provide taunt like a Sunfury Protector of Defender of Argus.

This deck can use various different cards as variation cards.  You could aim for a little more direct taunt ability with the awesome Warlock card Felguard. Sure it slows you down a bit since you loose a mana crystal, but a 3/5 with taunt for 3 mana is huge if you have to fight a rush deck and don't get the right cards.

You could also look to grab Sylvannas Windrunner to replace Ragnaros in the deck. With the various ways you have to kill off minions, she makes a solid fit as well, since you can kill her yourself after killing all your opponents minions except for the one you want and then get it as well.

What are your thoughts on these two Control Style decks?  Are they similar to what you use?  How would you change them up? Do you have your own completely different control deck?  Let us know by posting in the comment section below.