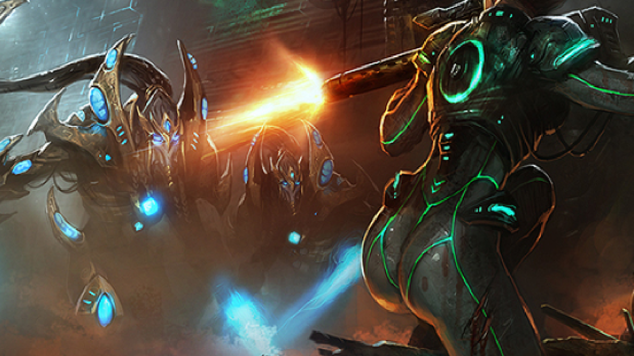 Picking a Race - Starcraft 2
Picking a race to specialize in can be hard. We hope to help the decision with a quick look at what each of the

There are three races in Starcraft 2, each of which plays completely different from the other. While you’re going to know how each race operates and what their strengths and weakness are, generally in multiplayer it is the custom to have a “Main” race that you play the majority of the time. Your go to race should be the one you enjoy playing the most because as your main, you will want to explore and study every possible strategy for use against all other races (including your own). To help you make this all important decision, we’ve prepared a short summary of what you can expect from each race to help you narrow it down.

The Terran are a highly aggressive race that also excel in base defense, a tough combination to overcome for any enemy. Their buildings allow then to “wall off” ramps and other strategic points, and their ability to lift-off can let them relocate out of danger or to another more strategic location.

In terms of their play in battle, they are a little more difficult to handle than other races, as they require a lot of micro management due to each of the units having their own abilities that must be used to maximize the unit’s effect. Terran units are generally slower than their counterparts in other races meaning you really have to think about your positioning if you don’t want to end up being quickly overrun. The variety of units at the Terrans disposal is one of their strengths.  You will never be in a situation where you cannot counter with a certain unit.

Unlike the Zerg, the Protoss are more about single unit strength than large amounts of disposable units.  Most of the Protoss units and buildings have not only a life bar, but a protective shield as well that must be depleted before damage can be done directly to the unit/ building. Creating the units and buildings is also done differently than the other races; they are warped in rather than produced. What this means, is that as many buildings and units as you wish can be warped (created) simultaneously so long as you have the resources and you are within the power grid (pylon area). There’s no waiting for units to be created one by one out of their building like the Terran. This also makes it possible for a single probe to erect an entire base solo in no time at all, as the probe need only start the building process, which will complete by itself.

Another perk of playing the Protoss are the Psionic abilities many of their units possess. For example force field, which projects impenetrable barriers onto the battlefield, can be used to prevent enemy assaults or break up their army for an easier kill; or Psionic Storm, a powerful AOE attack that can quickly destroy large packs of weak enemies with ease.

The Zerg are a Macro machine. They specialize in taking over as much of the map as fast as possible with hordes of alien attackers. Control of this area is maintained with the Zerg’s variety of fast moving units suck as the Zerglings, Mutalisks and Banelings. While they may not be the toughest units in the game, they make up for it with sheer numbers and the affordability of each unit. Losing a pack of Zerglings is no big deal because they can be replaced in no time and cost very little. The larvae system is behind the rapid unit production, allowing several units to be “grown” simultaneously.

As mentioned previously, the Zerg army is also very mobile. Speed boosted Zerglings can be across the map in the blink of an eye, while Mutalisks tear it up in the sky. The Nydus Network is a fast travel building that allows entire Zerg armies to travel from the Nydus Network structure to the end of the Nydus worm which can be placed anywhere the player has vision, without need of a drone.

Now that you’ve got a general idea of what each of the three classes are all about, the best way to get a feel for what fits you best is to get in the game and play. And remember; don’t give up on a race after one bad match. Not one race is undefeatable and it will take a lot of practice and game time to become familiar with a  race and truly enjoy all the ins and outs of their play style.