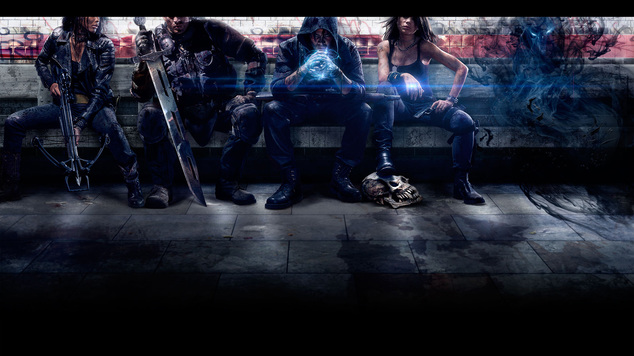 If you're like me, you ended up on a BioWare email list because you're interested in the previous games the company puts out. Whether you are the type to take time out daily to work on your latest Fem Shep fan-fic or you want to be the first to know about Strongholds in SWTOR, BioWare's got your number. So, like me, you've been getting emails over the past few weeks that make you wonder if BioWare's still in the gaming business or if they switched to a movie studio. This isn't a knock – the videos are like 90 second horror/thriller shorts and they are rather well produced. It just hasn't been your typical game announcement campaign, which left myself and my friends equally intrigued and puzzled.

Curious? Me too. The Shadow Realms website is surprisingly full of information for a game that's still really early in its development stage. If you followed STAR WARS: The Old Republic, you'll be very familiar with the names here. However, if you're going into this expecting this game to be anything like SWTOR, you'll be as disappointed as all of those people who picked up SWTOR expecting STAR WARS Galaxies 2.0. However, since this is BioWare, you can expect compelling story-driven content.

Experience the thrill of making your own choices as to the path you take through the story, uncovering new mysteries and revealing hidden twists unexpectedly as you progress.  Fight as a modern-day Hero who suddenly awakens with magical powers and is pulled into a dark realm and centuries old battle.

Shadow Realms, BioWare's new IP, will be a multiplayer RPG (note: not MMORPG) set in a futuristic dystopia. There are a few different classes to master, but one aspect of the game that's really interesting is that players can opt to play a Shadowlord, which will be the main enemy against the four heroes working through an adventure. In Gabe Amatangelo's Gameplay Blog, he discusses how Shadow Realms is greatly influenced by Dungeons and Dragons. Shadowlords are kind of like Dungeon Masters, in the sense that they have interactions with the game world and are able to have a view the other players will not have access to.

In a game session, four players will be the heroes, crawling through a dungeon. One additional player will be the Shadowlord, in the same dungeon with the heroes, controlling monsters and setting traps to keep the heroes from their goal. I really like this concept and I think that it can take a primarily PvE game and add in a unique dynamic that will keep gameplay from getting stale. Creative Shadowlords will truly up the replayability factor for Shadow Realms.

In addition to all of that, you'll have access to character customizations, character progressions, and abilities to help you create a character that fits you. This goes for both traditional hero classes and Shadowlords. Shadow Realms will also be based on an evolving, ever changing story, all based in the modern fantasy world of Embra.

It's exciting to see BioWare launch a new IP. I firmly believe that their other IPs have a long life ahead of them still, along with dedicated fan bases to continue supporting them. However, rather than getting to the point where not-as-hardcore fans start groaning at every game announcement “oh, this again?” BioWare is preemptively striking that with something completely fresh. Not only is it a new IP, but the concept of Shadow Realms itself is rather refreshing, and I look forward to following the game.

Shadow Realms is currently taking signups for alpha testing. Warning: an Origin account is required to sign up. Hopefully EA has gotten that one figured out, so those of us eager to check out and test this new IP will not have to jump through those SWTOR hoops to get into the game. Personally, I'm so excited for this that I won't let Origin issues keep me from signing up. See you in Embra!

To read the latest guides, news, and features you can visit our Shadow Realms Game Page.