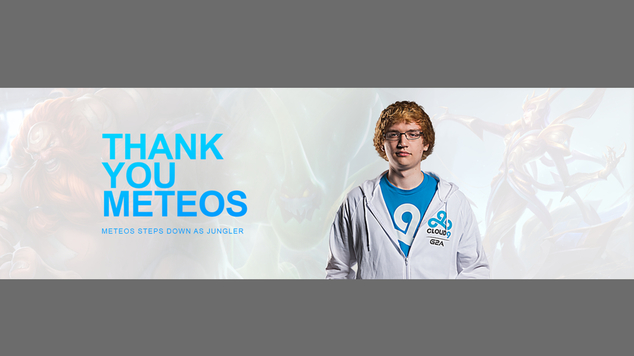 Cloud9's Meteos Steps Down, is Replaced By Hai
Yes, you did read that headline correctly.

Cloud9's League of Legends squad knew there was going to be an adjustment period after the retirement of mid laner, captain, and shot-caller Hai "Hai" Lam. However, their experience in the 2015 NA LCS Summer Split thus far has been nothing short of disastrous. The team that has been in every single LCS finals since they joined is now languishing close to the bottom of the standings with a 3-7 record, with nothing really providing much hope that things were going to be turning around any time soon. In light of that, a huge change has been made to the starting lineup.

Jungler Will "Meteos" Hartman, who has long been considered one of the best at his position in the West, has elected to step down from the team. After Hai's retirement, the burden of shot-calling fell on Meteos' shoulders, and it's a responsibility he appears to have struggled with. The trademark Cloud9 team coordination has been noticably absent this split, and Meteos has decided that leaving the starting roster will be to the overall benefit of the team. He will remain as a substitute, and will be "working on another yet to be announced capacity."

Replacing Meteos will be none other than Hai, the shot-caller whose presence has been sorely missed by his teammates. While we generally know Hai as a mid laner, he did begin his career as a jungler, so he is not entirely inexperienced in the role. However, he has never played it on the LCS stage, so how proficient he'll be, especially having been away for a while, remains to be seen. Hai originally retired due to health issues, so it seems doubtful that he will remain as a player long-term. The team has not yet announced how long Hai intends to play, but it would seem likely that they'll be looking for a long-term solution in the jungle, needing a player with strong shot-calling abilities. This also doesn't completely rule out a return from Meteos, as while this is only speculation, he could take this time to work on his own shot-calling abilities.

There are several ways this could end up playing out, but it's no stretch to call this news somewhat shocking. It's no secret that Cloud9 needed something drastic to change, so now we'll just have to wait and see if this was the change they needed.