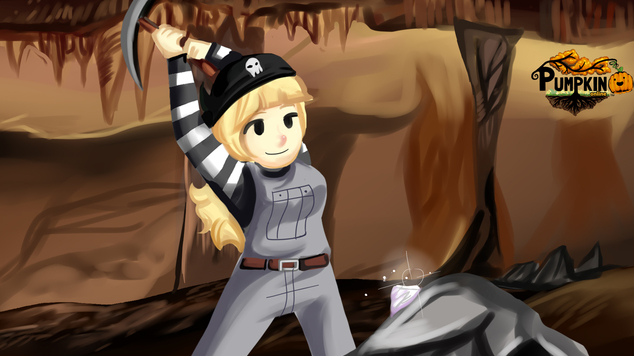 Farming for the Digital Masses

Just so y'all don't think that I get all of my gaming news from either press releases emailed to me or from my gaming multi-reddit, here's a new one for ya: I found out about a new MMOG because I follow Modern Farmer on Twitter. While I'm quite certain that Pumpkin Online will not be “the World of Warcraft for the agricultural set,” I can't fault them. Modern Farmer's area of expertise lays in the realm of what it's like to be a farmer – large or small scale – in the modern age. Plus, they have Goat Week and that's why you should follow them.

Anyway, let's get back to Pumpkin Online, otherwise I might end up blabbing on forever about, you know, goats. I mean, they are the best animal ever (sorry dog I start fostering tomorrow) and I really need to get around to sending Coffee Stain my hopefully not too insane ideas on how Goat Similator can become either an MMO or at least a MOBA quite easily. Never mind the coding part, it totally works in my brain. Pumpkin Online just might have goats, which means I would end up being a Rancher. Sorry, ModFarm, but I don't see Farmer in my gaming future.

Pumpkin Online, which is wrapping up its Kickstarter campaign (rather successfully with under two days left), offers players three character archetypes: Farmer, Rancher and Chef. Farmers farm, and where they decided to set up shop will factor in what kind of crops they'll work on. Much like the real world, farmers in colder climates will not bare the same fruits of labor as those in tropical regions. Ranchers raise animals you'd find on farms – you know, goats. Please let there be goats!! Chefs get to cook things, but cooking is also a profession players can take up, so I'm not sure how exactly that will work out. Maybe they get bonus Chefing skills.

One thing that I thing is awesome, which isn't mentioned in the ModFarm article is that Pumpkin Online also offers romances for characters. You can “date” NPCs without restriction based on gender or sex. Pumpkin Online is an equal opportunity lovin' game. Character creation also allows for non-binary gender definitions and customizations that are not restricted to just male or female. The non-binary community will have a game that allows them to create characters just how they want them without feeling pigeon-holed into male or female. You might not see this as an issue, but I have a good amount of friends who are bothered by this, and I'm happy to see a developer open up characters so that more people can find comfort in creating a character that fits them.

Pumpkin Online also has activities such as fishing, crafting, cooking, mining and jobs. Each player gets a farm that is highly customizable and upgradable. While you're more than welcome to play with your friends (it is an MMO after all), there are plenty of options to enjoy the game solo. Pumpkin Online offers an open world that comes with achievements and badges, as well. If that's not enough for you to do, try out some of the various minigames while you're out exploring. Don't worry about wandering into some place you shouldn't be, since there are no mobs to fight in Pumpkin Online, which will artificially gate you out of an area.

What do you think? Would you play a non-traditional MMOG or would you need monsters to fight? Which would you choose, Farmer, Chef or Rancher? If you're interested in picking up Pumpkin Online, it's currently still running its Kickstarter and $15 gets you beta access. Happy farming!

To read the latest guides, news, and features you can visit our Pumpkin Online Game Page.