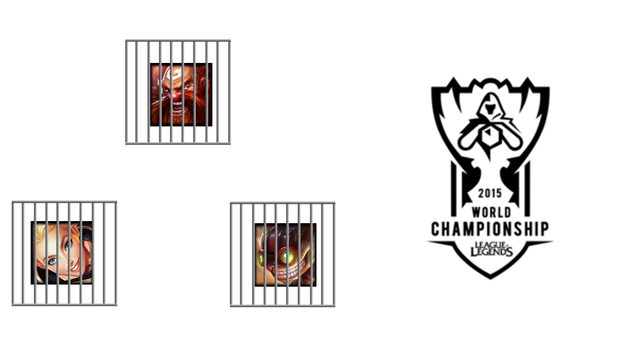 Two days ago, Europe's Fnatic and China's Edward Gaming took to Summoner's Rift to compete in a highly anticipated quarter final match in the League of Legends Season 5 World Championships. Unfortunately, some of that excitement was a bit tempered when game 2 had to be remade due to a game-breaking bug.

Fnatic's jungler, Reignover, at one point found himself completely unable to use Gragas' Barrel Roll ability. This bug has actually been around and known for quite some time now, but Riot Games felt that it occurred so infrequently, and was so difficult to produce, that it shouldn't have an impact on the tournament. Unfortunately, they were mistaken, as a quarter final game had to be remade due to it.

As an ability that can be re-activated after cast, they found the bug was also potentially an issue with the champions Lux and Ziggs, and so those two have joined Gragas in being disabled for the remainder of the tournament. While Lux and Ziggs were likely not going to picked regardless, Gragas has been a high-priority jungler so far for many teams. In fact, Gragas, Elise, and Rek'Sai have made up the tier 1 jungle pool. This now opens up a strategy for the blue side team to ban either Elise or Rek'Sai, then pick the other, forcing the red team to dip into the tier 2 jungler pool. With blue side already sporting a win rate over 60% throughout the tournament, this just puts the red team at even more of a disadvantage.

It's truly unfortunate that such a shake-up is occurring, and it will be in effect for both the semifinals and finals. Given how long the bug has been around for, one has to wonder if this situation could have been avoided. Either way, the four teams moving on will need to adapt their pick and ban strategies to compensate.