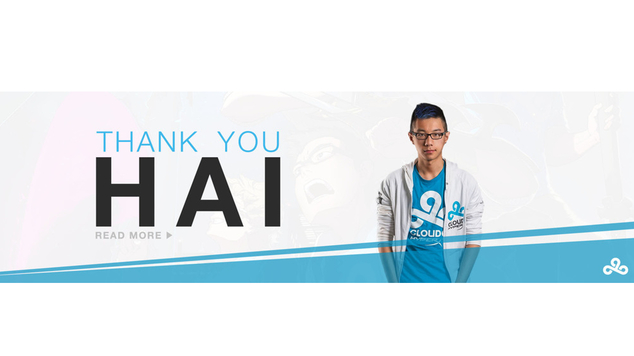 Hai Steps Down From Playing With Cloud9, Will Stay With the Organization
The founder and face of one of North America's most successful League of Legends teams will no longer play.

Cloud9 has been a remarkable League of Legends teams for a variety of reasons. They experienced immediate success upon entering the LCS, posting a record of 25-3, the best all-time. They managed a 13-win streak in both that split and the next LCS split, also a record. They have been one of the top two teams in North America since they entered the LCS, and perhaps most incredibly, have done it all without a single roster change. Now, it seems that the first ever roster swap for C9 is imminent.

Hai Lam has been the face, captain, and mid laner of Cloud9, and has always been an extremely likable personality. He has always taken responsibility for everything that goes on with the team, and has managed to always put on a smile while doing so, always making time for both his fans and the media. His shot-calling abilities became the stuff of legend, as Cloud9's team fighting was on a level the LCS had never before seen. Unfortunately, as health injuries began to take their toll, his play suffered, his calls weren't as crisp, and the team as a whole felt the weight. For the first time, C9 didn't end the regular season in 1st place, and for the second split in a row, had to settle for being runners-up to Team SoloMid. With his performance becoming shaky and his wrist issues threatening to end his playing career regardless, Hai decided the time is right to step down from C9's player roster.

Fortunately for all fans of Hai and Cloud9, he won't be leaving the organization he helped bring to life. He will assume new responsibilities as Chief Gaming Officer, and according to Hai, those responsibilities will "focus on acquiring new talent and teams across all relevant games, helping bring in new partners and maintaining our partner relationships. I’ll also be mentoring players in growing their brand, making the most of their time here, and doing everything in my power to expand Cloud9 into a household name as eSports continues to grow."

It's sad to see a mainstay of the League of Legends scene step down, but this is a move that will hopefully prove beneficial to Cloud9 in the long run. According to a report from The Daily Dot, both Nicolaj "Incarnati0n" Jensen and David "Yusui" Bloomquist will be trying out for the mid lane, and both of those players are regarded extremely highly for their mechanical skill. The fact that Hai will remain with the organization can only be a good thing, and will help whoever the team selects to integrate well. We wish both Hai and Cloud9 the best of luck moving forward. You can read the full official statement from both Hai and owner Jack Etienne right here.