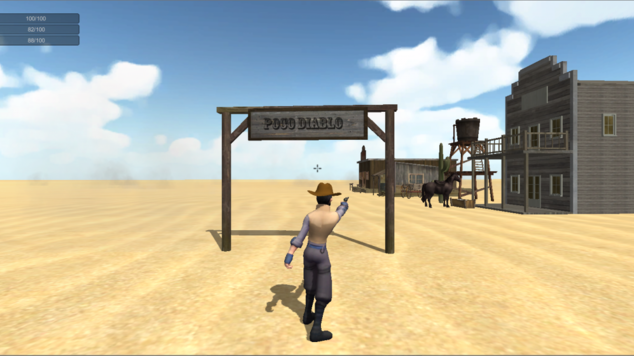 Not a whole lot has been released so far for this upcoming MMO set in the wild west, outside of a few screenshots on the developer's interim website (they have a real one in the works, it seems), but their Kickstarter is already at 130% of their contribution goals with 41 days to go, which is rather impressive.

Bone Gulch will have options for different types of players, from those who want to be the new sheriff in town to Billy the Kid wannabes who prefer to be the bank robbin' sort. One thing that will be interesting to see is how mounted combat will play out, since it will be through stage coaches and on horseback. Since so many games seem to get mounted combat wrong, a game that can get it right and pull it off will fill a needed role.

Another area that a lot of games get wrong, but people really want, is a good, working bounty system. Bone Gulch aims to have just that, which players can work on goals by robbing banks and stage coaches. It is not known whether this bounty system will include player targets or not, but it does say that players and NPCs will try to stop you in your bounty hunts.

Until more information is known about what all Bone Gulch will have, it's hard to form an opinion. It looks like it might offer open world PVP, but will it be a no safe zone PVP game or one where PVP happens in certain zones. Their Kickstarter is fairly sparse with information, but hopefully we'll see it get filled out more soon and learn exactly what all it is that London based Nesoi Tech hopes to accomplish with Bone Gulch.

To read the latest guides, news, and features you can visit our Bone Gulch Game Page.