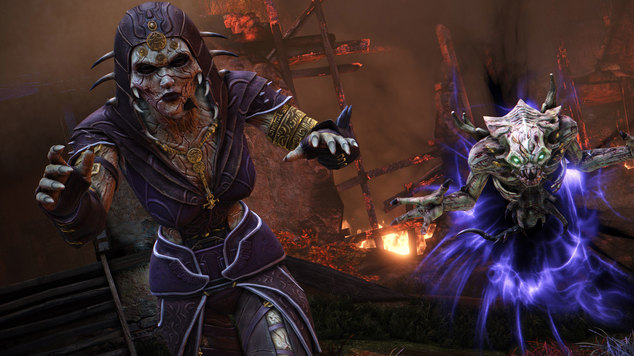 Nosgoth is awesome and as a free to play title, I think it's up there with some of the best for sheer multiplayer fun. Its got some quirks but the premise is solid, it's polished and matches are unnerving affairs that get the blood pumping. According to recent news, over 1 million players have also downloaded the game. That's a good thing for Square Enix and I'm super glad the game is doing well. The third-person perspective likely doesn't sit well with everyone but I think it works and stops the game falling in typical first-person territory. I'm pleased, then, that a new Vampire class is on the horizon: The Summoner.

Cursed immortals trapped in decaying bodies, the Summoners of Clan Melchahim have delved into forbidden lore in their attempts to save themselves. Flesh-sculptors graft material from unwilling sacrifices to their own bodies to cover their putrescence, while soul-wrights call on the powers of the Underworld to fuel their battlefield sorceries of destruction, protection, and summoning.

As a ranged spellcaster, The Summoner seems a good fit into the current Vampire roster. It's two special abilities include Abyssal Bolt that allows The Summoner to conjure and throw a sphere of dark magic that damages nearby enemies over time before exploding after a few seconds. There's also Hellstrike that targets an area with streams of dark energy which explode on impact. Best of all has to be its secondary ability, Abyssal Barrier, that reflects projectiles. Against the ranged-heavy Humans, it's going to be a life saver especially when so many people seemingly play Hunter for its rapid fire crossbow.

If you're interested in playing Nosgoth, I'd recommend you head on over to the official webiste. The game really is a lot of fun and I look forward to testing out The Summoner as quickly as possible!

To read the latest guides, news, and features you can visit our Nosgoth Game Page.