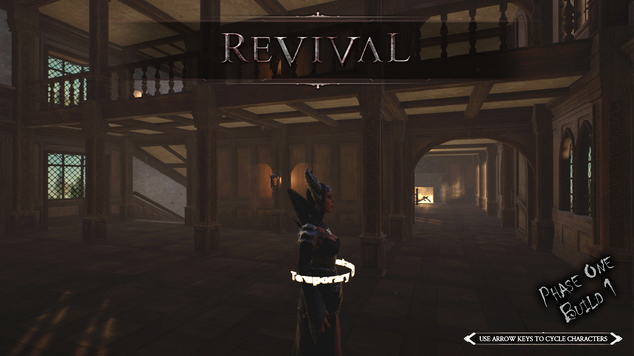 Revival Opens Doors to Early Adopters
Illfonic deploys the initial client build for its first phase of deployment. Read on for more details about wha

Today is the day.

Fans of the up and coming MMO Revival by Illfonic Studios finally get to explore a small fraction of the game as the company opens up their doors to early adopters. The Denver-based development studio has tagged Revival as a MEOW (multiplayer evolving online world) as a way of differentiating itself from the typical MMORPGs flooding the market these days.

The game is meant to be dramatically different than any other MMO fantasy games that most MMO veterans are familiar with. So different, in fact, that the studio is even innovating with its design and deployment strategy. The developers at Illfonic have decided to break the deployment of Revival up into six distinct phases that will continually expand the world and the completeness of gameplay with the implementation of each new stage.

What early adopters will be getting their hands on today will be the very first build of Revival's Phase I player housing element.

A key defining feature of Revival that separates itself from other MMORPGs is the importance of residency to many of the games core systems. Players will be able to purchase housing that exists in non-instanced neighborhoods and can be physically found, seen, and used in the public world. Property rights and the ability to rent-out and run businesses are an integral part of Revival's core mechanics and aren't just a bolted on luxury to a larger game. NPC's will have unique houses as well, and players will have to figure out who lives where and who offers what services in each and every major city of Revival.

In this initial build, players will get to walk through an offline version of their own personal property, exactly as it will appear in the game world. While this early build doesn't contain full decorative kits or other upgradable room units, it will be the first chance that players get to roam their future residences. I expect there will be several more updates to Phase I, as Illfonic continues to deploy this first stage and really flesh out what the indoor experience of Revival is going to look and feel like.

Phase II of Revival will be the deployment of the first starting city: Crown's Rock - where all of the initial houses currently up for sale will be located. A map of Crown's Rock can be found on the game's store page where interested parties can browse properties and buy-in to this epic MMO concept.

For more information about what Revival wants to become, check out the official website - specifically the Philosophy, Features, Monetization and Game Design pages. I also did an extensive interview with Lead Systems Designer Adam Maxwell earlier this year, it's got tons of great insight that you just can't get from the official website alone, so definitely go check that out!