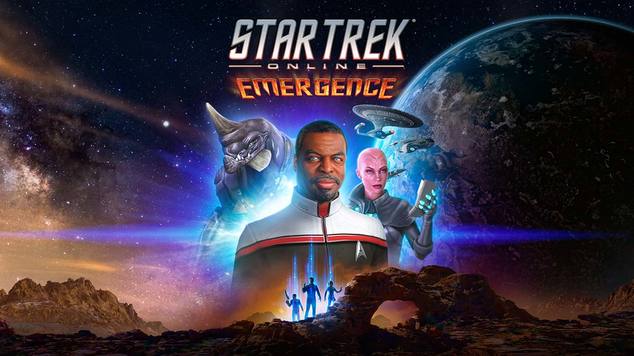 Star Trek Online Season 14 Live on All Platforms
The LeVar Burton-voiced campaign continues on PlayStation 4 and Xbox One.

It's a great time to rejoin Starfleet in STO this week as both console and PC players can now enjoy a colony's worth of new content.

REDWOOD CITY, Calif. – November 14, 2017 – Today, Perfect World Entertainment Inc., a leading publisher of free-to-play MMORPGs, and Cryptic Studios announced Season 14 – Emergence is now available for Star Trek Online on Xbox One and PlayStation®4. An expansive new colony world awaits console players in the free-to-play MMORPG based on the iconic Star Trek universe. Captains help the Lukari and Kentari defend their homeworld from the genocidal Tzenkethi, alongside Starfleet's Geordi La Forge, voiced by Star Trek legend LeVar Burton. Players can also discover a new Fleet Holding, take advantage of a new Primary Specialization and for a limited time, gain free access to the Kilt and Skant uniforms from Star Trek: The Next Generation.

Check out the trailer for Season 14 – Emergence on Xbox One and PS4: https://youtu.be/yXONbY8jZi0

The new featured episode "Melting Pot" takes captains to a brand-new colony world in Dranuur, recently established by the Lukari and their long-lost sister species, the Kentari. The two species are joined by Starfleet Captain Geordi La Forge (voiced by LeVar Burton), who is helping them learn to co-exist and rebuild their home planet. Players rejoin La Forge and Kuumarke (voiced by Kipleigh Brown) as they tour the new colony - when a sudden discovery invokes the ire of the marauding Tzenkethi and puts this newly discovered world in terrible danger.

Star Trek Online is a free-to-play massively multiplayer online game where players can pioneer their own destiny as Captain of a Federation starship, become a Klingon Warrior and champion the Empire through the far reaches of the galaxy, or rebuild the Romulan legacy as the commander of a Romulan Republic Warbird. In Star Trek Online, players have the opportunity to visit iconic locations from the popular Star Trek universe, reach out to unexplored star systems and make contact with new alien species. Star Trek Online is currently available on PC, PlayStation®4 and Xbox One.

ABOUT CRYPTIC STUDIOS, INC.
Cryptic Studios, Inc. is a leading developer of online games committed to delivering the next level of gameplay. Cryptic Studios, Inc. develops AAA titles for PC and is rapidly diversifying its portfolio of games to expand beyond the traditional MMORPG genre. Its successfully launched titles include Champions Online: Free for All, Star Trek Online and Dungeons & Dragons Neverwinter. Cryptic Studios, Inc., a subsidiary of Perfect World Group, is located in Los Gatos, CA.