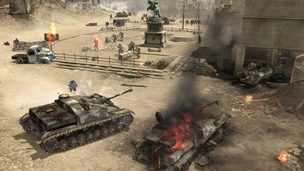 THQ has tapped Live Gamer to integrate their Elements platform to power the microtransactions in their upcoming title, Company of Heroes Online. Live Gamer was founded in 2007 and has already developed a working relationship with several developers, including Sony Online Entertainment for Vanguard: Saga of Heroes. In addition to utilizing Live Gamer for Company of Heroes Online, THQ will also put their service in place for their online PC and mobile games.

Live Gamer, the trusted total commerce solution for the interactive entertainment industry, today announced that it has been selected by THQ Inc. (NASDAQ: THQI) to power the e-commerce solutions for the companys PC-online and mobile games in North America. Company of Heroes(R) Online, launching later this year in the United States and Canada, will be the first THQ title to integrate Live Gamers Elements platform for monetizing its virtual economy. Other scheduled projects include multiple social game titles for Facebook.

To read the latest guides, news, and features you can visit our Company of Heroes Online Game Page.