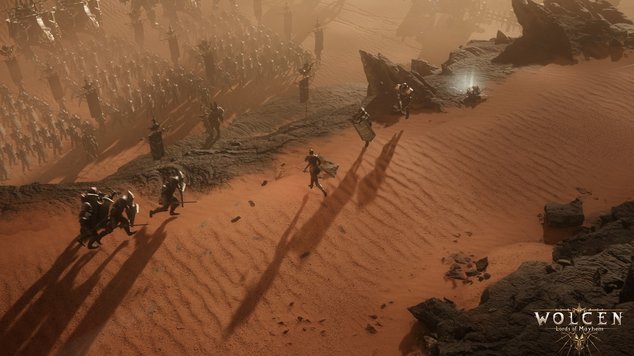 Wolcen has officially launched on Steam, and after a lengthy Kickstarter, is finally in the hands of the general public. Like any launch, that's anticipated to do well, its been absolutely bombarded by new players.

The flood onto the servers was such that, for most people, they were simply unable to connect, or they'd get booted. Needless to say that the development team are doing their very best to remedy the situation, and as of 5 hours ago, the server maintenance was extended.

Status update: The server maintenance is extended until 5PM UTC. The characters, stashes, and endgame online will be restored as they were prior to server shutdown and we will add safeguards to avoid such issues to happen again. Thank you for your understanding.

There's also a new blog post on Steam giving a lengthier overview of whats gone wrong, and what the studio are doing to fix the situation. Despite these concerns, which I think are totally acceptable for any launch, it's still holding up well on Steam reviews (not surprising, the game is great).

Yesterday, we launched our first game and we were astonished to see that so many players joined us on that journey. We've now reached a new peak of 62 000 players, our highest peak before that was month was 1 934. Although it makes us happy that we reached such high numbers, it unfortunately led to some issues on the servers.

When the game launched we were already in contact with our server partners to increase the charge of the servers in case of a high number of connections. But the numbers raised insanely fast and the simultaneous attempts to join the servers also caused issues with the authentication. We had to ask for more capacities there as well.

The number of players has somehow stabilized but we might experience other peaks this evening and during the weekend and we’re doing our best to prepare our servers for that.

Right now, we have more servers, more space, and this evening we will also apply a hotfix that will resolve some server & client crash, improve authentication and reduce the amount of disconnection from game services. We will also add a safeguard regarding quest progression loss.

However, the friendlist functionalities/party group are still being restricted for the moment until the situation stabilizes.

Our teams are also working on other issues that will be hotfixed. Here is a non-exhaustive list of bugs we’ve already fixed and hope to push early next week:

We keep gathering your reports and we keep working on other issues that will be fixed eventually. We also already planned another hotfix for the end of next week, and we’re ready to hotfix as soon as possible if there are critical issues that need to be addressed.

Please accept our apologies again for the inconvenience. Thank you for being so many to support us.

To read the latest guides, news, and features you can visit our Wolcen Game Page.