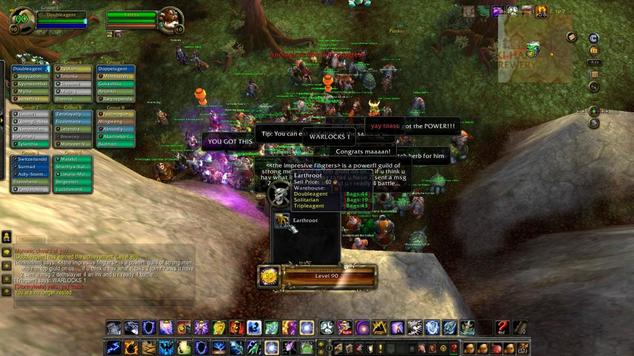 World of Warcraft's Weirdest Journey to 90

Today in weird, we are seeing some of the goofiest World of Warcraft news to break out in some time. Now famous Pandaren, Doubleagent, has reached 90, as we learned in this thread on the official forums. Pandarens start off neutral, and when they outlevel their starter zone, they decide if they want to go Horde or Alliance. Doubleagent, not wanting to choose a faction, stayed out on the Wandering Isle to begin the slow, painful crawl to 90 in a way we haven't seen before. I'm sure we'll see others inspired by this nutty tale and follow suit.

Around level 15, you'll no longer be able to gain experience from killing mobs, and you'll have already finished all of the quests you can offer. So, what's left? Experience from gathering skills. Doubleagent slowly picked flowers and mined ore at the excruciatingly slow process of netting approximately 25 experience points each harvest, making his anti-race to 90 a 170 day long journey.

In Doubleagent's FAQ, we've learned a few lessons on the cost of staying neutral. At level 10, you run out of quests. At level 15, grind experience from mobs. There is not a mailbox on the Wandering Isle, so you can't even mail anything to yourself. You're pretty much isolated from the rest of Azeroth, because even queuing for dungeons or battlegrounds requires a faction. Because using even the level 90 boost requires choosing a faction, Doubleagent couldn't go that route, either. Worst of all, Doubleagent couldn't leave the Wandering Isle, because that also meant choosing a faction. If you're like me and you end up getting tired of being in a leveling zone for too long, this would drive folks like us pretty crazy.

To get to 90, Doubleagent invited anyone wanting to join in, to create or use a Pandaren they already have, for a 40-man gathering raid for the final push. This invitation was open to any Pandarens still on the Wandering Isle, since you cannot return to it once you leave, who were level 10 or higher. This spectacle was streamed live on Twitch, but also captured on YouTube for anyone who might have missed the slowest ding in Warcraft history. Watching the video on YouTube, we see that Doubleagent's title is appropriately “The Insane”. (To skip right to the moment, head over to 32:20.)

This entire journey was well documented on Doubleagent's YouTube channel, so don't worry if you missed hours of mining, because it's all there. He even made videos of Doubleagent's various deaths, and also detailed why they were necessary. In fact, Doubleagent has painstakingly documented about everything you can possibly think of. There is even a community for “stayers” or those who never leave the Isle. The FAQ is a great resource for anyone interested in becoming a stayer or seeing if they can beat Doubleagent's 170-day record to 90.

So, what now? In order for Doubleagent to stay neutral, this famous panda is stuck on the Wandering Isle for now. The thread already hints that we'll see Doubleagent keep track of the next 10 levels after Warlords of Draenor launches. It would be fun to see how Blizzard responds to this. Do they award him? Do they open up a neutral faction? Do we just see a “good job” with a pat on the back post and that's it? Whatever does happen, this weird adventure has definitely been a pretty great story to read on the weekend. Congrats on your ding, Doubleagent.

To read the latest guides, news, and features you can visit our Mists of Pandaria Game Page.