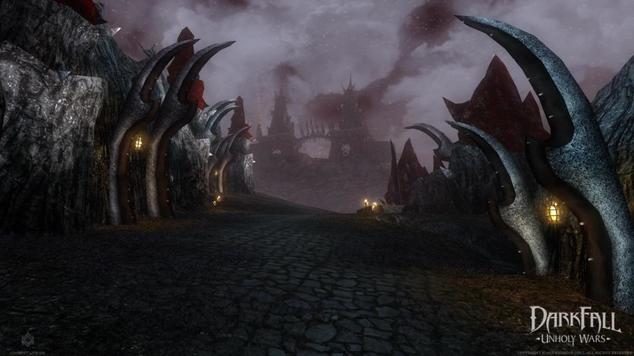 In their updated roadmap for Darkfall: Unholy Wars, Adventurine announced to players that they're running a contest, from now until July 20th, where creative lit majors can finally use those English degrees they spent so much money on. Anyone with a good story to tell can put one together and email it off to Adventurine.

The rules are simple. While you're certainly capable of writing a Stephen King-sized novel, Adventurine asks that you keep your submission to 1500 words or less, to minimize your Agonian slash fiction and so the staff can get through all of the submissions in a timely manner to select winners and convert them into side quests. Make it obvious in your submission what your character's name is (see next paragraph for the why part), just in case your narcissistic tenancies are feeling a little low these days. Your stories must be based on Agon lore and everything is fair game for you to include.

So, why would you want to include your character's name when you email in your submission? While an unknown number of good submissions will be turned into side quests (and possibly edited within reason), one submission will be selected as a grand winner. This winner will be granted with a unique in-game item. All stories that get used will be credited by your character's name – talk about bragging rights! You'll probably want to make sure that your slash fiction isn't too embarrassing then.

Need to brush up on your Agon lore or not sure what is going on in the Unholy Wars story? Adventurine also recently released a lore primer broken into four easy to digest parts. Learn about the lands you'll adventure through, what sorts of crazy things to expect out in the world that will want to kill you, the people of Agon's past, and the history of how Agon came to be through the words of the Acolytes of the Watcher. Now you have the perfect setting for your Darkfall-inspired bromance novella.

That's not all Adventurine has released lately. In the roadmap, they let us know that players can expect two new patches for July. The first of these is mainly to apply and resolve balance issues that were brought forth with the custom roles patch. The second, which will come later in the month, will be a quality of life patch that will add in HUD customization, breath and health bars, new crosshair, and movable cast. They're also working out new items for the store, which they plan to announce as it gets closer to the items being put in.

Lastly, they gave us a recap on the previous roadmap (or, “immediate plans” as they're calling it), giving updates for what is still waiting to get added into the game. The first of siege engines should be expected to be seen in early or mid August. By September, the first questlines for Unholy Wars should be making their way into the game. Slated at an unknown date, inventory management will get an overhaul, enchanting will become available to allow for further customization, and alignment will be added in, along with a reduction in size of safety zones. Many of these improvements directly impact quality of life, which is sure to make the game more enjoyable for players, although the choice of launching a game before the system to add in quests is in place is a puzzling decision.