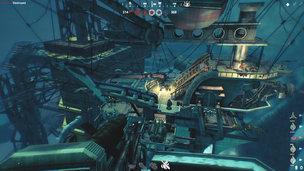 <p>Muse Games took to the sky during the third <em>Guns of Icarus Online </em>closed beta event for some new video.

Muse Games devs took to the sky during the third closed beta weekend event for Guns of Icarus Online to capture some new footage of team-based airship combat and new weather effects. Give it a look below.

The next closed beta event for Guns of Icarus Online gets underway on June 22nd. You can register for a chance to take part on the Guns of Icarus website or pre-order to gain access to all remaining beta events.

June 6th, 2012   Muse Games has just wrapped up Closed Beta Round 3 for Guns of Icarus Online (www.GunsOfIcarus.com). The addition of cloud and cover mechanics introduced a new facet to the cooperative airship combat seen so far.  See the video at http://youtu.be/8Igpp1K-ciA and visit the website at www.gunsoficarus.com for new screenshots, 25% off pre-orders, and sign up for the newsletter to get chances to join the beta tests.

The next Guns of Icarus Online beta starts June 22nd. Pre-orders not only receive 25% discount but will be able to access this round and all following rounds of beta. In the June beta test Guns of Icarus Online will likely have a new map, flamethrowers, and major weapon balances, as well as massively improved client and server performance and potentially new weather effects.

Guns of Icarus Online is the first co-operative airship combat game mixing together first-person shooter action with team-based strategy. Up to four people will crew a ship, taking on one of the key roles of Captain, Gunner, or Engineer, joining a team, and fighting against other ships above the post-apocalyptic waste. In Guns of Icarus Online it will take teamwork and tactics to dominate the skies.

For more information and to sign up for the newsletter, take a look at www.GunsOfIcarus.com!

Based in New York City, Muse Games is a Unity development studio dedicated to producing high-quality games for Mac, PC, and mobile platforms, including its flagship titles Guns of Icarus and CreaVures. The studio has received nominations for multiple awards, including Brighton Develop Conference Indie Showcase Finalist, Game Connection Selected Project, and Best Casual Game at the International Mobile Games Awards. In 2012 CreaVures won a Propeller Award for Best Mobile Game. Find out more at www.MuseGames.com.

To read the latest guides, news, and features you can visit our Guns of Icarus Online Game Page.