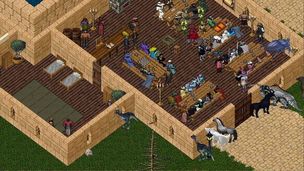 Editorial - Raising the Dead - Page Two
<p>But a complete reiteration of the classic game, such as what NetDevil is doing with Jumpgate, could allow t
Feature
Ultima Online

Baltimore Games Day was not all about Warhammer Online for Mythic
Entertainment, the company also gave us a look at the latest Ultima
Online Expansion, Stygian Abyss. For those who may not know, Ultima
Online is the grandfather of all MMORPGs and it is still strong today.
The game has been around almost twelve years and has a very hardcore
player base. Stygian Abyss is adding a new zone into the game, a new
race, the Gargoyles, and much more for players to enjoy. Lead Designer
Tim Cotton gave the presentation so check out some of the highlights
below.

When talking about the Stygian Abyss, Tim said that they used Ultima
Six and Ultima Underworld as their models for the expansion. They
wanted to bring some of the fun from those two games back into Ultima
Online and used elements from both games in the expansion. He also
pointed out that this is the eighth expansion for UO.

The Gargoyles join the ranks of Ultima Online.

The new race is the highlight of the expansion as player will finally
be able to play as those winged, walking, spell casters, the Gargoyles.
For old school Ultima players Gargoyles meant a tough fight, but good
loot. Now fans can walk around as these creatures that get to choose
from all the great skills in the game. Along with the Gargoyles,
players will be introduced to the thrown weapon ability. This will
allow players to make attacks from a distance and works differently
from archery. The concept art for the boomerangs was very cool along
with all the other thrown weapon varieties.

Players will also have sixteen new spells to choose from with names
like Nether Bolt, Eagle Strike, and Stone Form. This will give casters
an even stronger arsenal when going into the Abyss. Mixing spells with
the new thrown weapon skills players will also have a new Profession
Title, the Bladeweaver. Also the new skill set for Imbuing will be in
the game and allow players to create some serious effects for their
weapons.

The land of Ter Mur is opened up and will serve as the stomping grounds
for some new creatures. Updated variations of the Lich as well as a
Medusa, Colossus, and the Stygian Dragon can be found roaming the dark
lands. Ter Mur will also lead players to the entrance for the Stygian
Abyss dungeon. The dungeon will have five major boss mobs inside which
player groups can bring down for some serious loot. Ter Mur is
constantly under attack from creatures coming in from the Void. This
new zone is not for the weak.

Overall Ultima Online looks good, if you ever had a thought to come
back to the game this is definitely the time. The new expansion looks
to offer a lot to players and brings some great new zones and
encounters. Of all the MMOs out there Ultima Online has proven that an
online game can stand the test of time. For you old school players, do
not worry, we were assured that Stygian Abyss will support the 2D
client. There was no word on when Stygian Abyss is coming, but the demo
we saw looked polished and ready to go. Let’s hope we can all
return and start Gargoyles in the near future.

Editorial - Raising the Dead - Page Two
<p>But a complete reiteration of the classic game, such as what NetDevil is doing with Jumpgate, could allow t