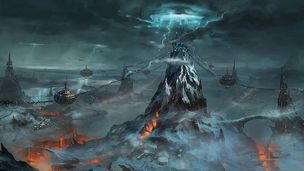 My intended weekend with Black Gold Online was met with difficulty. Originally unable to open the client due to unforeseen Gremlins in my system only to then have workmen outside my home accidently cut the power on my street, opportunities to explore what Black Gold Online had to offer were far too limited for me to truly be able to judge where this product is heading. With Alpha having now closed and with the closed Beta right around the corner there will however, thankfully, be opportunities for me to dive back in. I must admit I’m never entirely comfortable providing first impressions to Alpha products as it often feels like putting a portrait on display without paint having been put to canvas and so instead of pointing out the obvious flaws, I wanted to discuss just some initial thoughts on the game and the direction it’s taking.

At the moment Black Gold Online seems to be well and truly under peoples radar. From the creators of Age of Wushu, the free-to-play eastern themed action mmorpg, SnailUSA clearly have the experience to develop and deliver multiple online products (Ministry of War, Heroes of Gaia, Age of Wushu and Black Gold Online with two more to come) suggests that the company is doing somewhat well in the online space. Black Gold Online is their attempt to break into a western market by sticking to something a little more traditional in terms of leveling and questing while adopting an art style more fitting for an audience this side of the pond.

The result of this attempt to tap into our tastebuds is to mesh both steampunk and fantasy with the player able to select one of two factions: the Kingdom of Isenhorst and Erlandir Union (steampunk and fantasy respectively). As far as I understand it and from a lore perspective, the Kingdom of Isenhorst and the Dwarves utilise Black Gold to power their steam contraptions and infrastructure while Erlandir Union and the Kosh (elf-like beings) or the Yutonian (human in appearance) use Black Gold to power their domains magic. As a concept it sets out the stall for two warring factions and provides more than enough player incentive to not only progress that war but to gain control of territory and bring back the Black Gold for your faction. Although the intention is to progress to contested territory in order to undertake this end game content, the early levels will see you picking one of six available races (though only the Buvont, Lokemean, Kosh and Aurek are currently playable) and one of 12 classes.

For the most part SnailUSA have done a good job in providing identity to their classes, with all of them serving a definitive purpose (the Beast Master reveal greatly reminds me of Warhammer Online’s White Lion) and yet my reservation is the fact that despite the exceptional setting of this hybrid steampunk and fantasy, the styling of those classes and its game world still feel inherently eastern. Considering the game utilises the same game engine as Age of Wushu that isn’t altogether surprising (Age of Wushu looks glorious) but it does leave me wondering as to whether or not the intention to break the western market is truly possible when an eastern style is so ingrained. To some degree Black Gold Online feels like very Final Fantasy wrapped in steampunk, right down to the heart shaped faces, anime eyes and the scantily clad women who seem to have left their armor at home. I think the steampunk and fantasy setting could have been much grittier and much darker than we currently have but that isn’t to say that it doesn’t have appeal.

In terms of combat Black Gold Online relies heavily on a players ability to aim and sits somewhere between Tera and Guild Wars 2 for its movement and method of attack. It isn’t telegraph heavy like WildStar and doesn’t require targeting. Considering the games PvP focus I’m glad that SnailUSA have stepped away from the typical target/fire/forget approach seen in the likes of World of Warcraft as its important for player skill to take center stage.

Basic framework of the game aside and with me very much looking forward to accessing the Beta client, my biggest reservation for Black Gold Online even after the developer tour has to be its place in todays market. The massively multiplayer space is very crowded and with the likes of Guild Wars 2, Elder Scrolls Online and WildStar still at the forefront of peoples minds, is there room for Black Gold Online on peoples radar? When I’ve discussed Black Gold Online with people, few if any have heard of it and while it’s fair to say the media blitz has yet to begin (that’s where we come in) another free to play massively multiplayer game focusing on PvP sounds rather generic and I’m keen to see whether or not the lack of a hook similar to Alliance versus Alliance battles, World versus World or Warplots is enough to grab player attention.

We’ll be covering Black Gold Online in much greater detail in the coming weeks as the Beta opens its doors so expect plenty of coverage when it comes to PvP, combat, classes and the leveling process.

Black Gold Previews the Beastmaster Class
<p><em>Black Gold Online</em> reveals more about its warrior of nature and their beastly companions.</p>